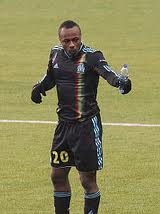 Newcastle United continued their search for players in France this weekend by having a closer look at Marseille star Andre Ayew. The Ghana international has already claimed interest from Barcelona this market and although the Spanish giants have not stepped up their hunt for the player, Ayew may still be able to move from the club if Newcastle are going to take their interest any further. The player has spoken out about playing in England over the past few months and there is a chance that he will be able to do that as Le 10 Sport do claim that a bid is being readied for the Marseille man. RMC have confirmed to us that Joe Kinnear was there personally to watch Ayew on Friday against Valenciennes. RMC are now reporting that Andre Ayew will meet with Marseille President Vincent Labrune at the beginning of next week to discuss his future.

According to The Times newspaper this morning, Newcastle have now made a £7 million bid for the player.

Another Marseille man being targeted from the Premier League this weekend is Andre-Pierre Gignac. The French striker was watched by West Brom representatives, but it does appear to be a waste of a journey from the Baggies as Gignac stated last week his desire to stay at Marseille and his love for the club. Any offer for the player now would surely be a waste of time.

Elsewhere, Ouest France report that Cardiff City scouts watched Rennes full back Kévin Théophile Catherine, but after a complete nightmare performance two weekends ago, one doubts that he would be suitable for the Premier League for the moment.