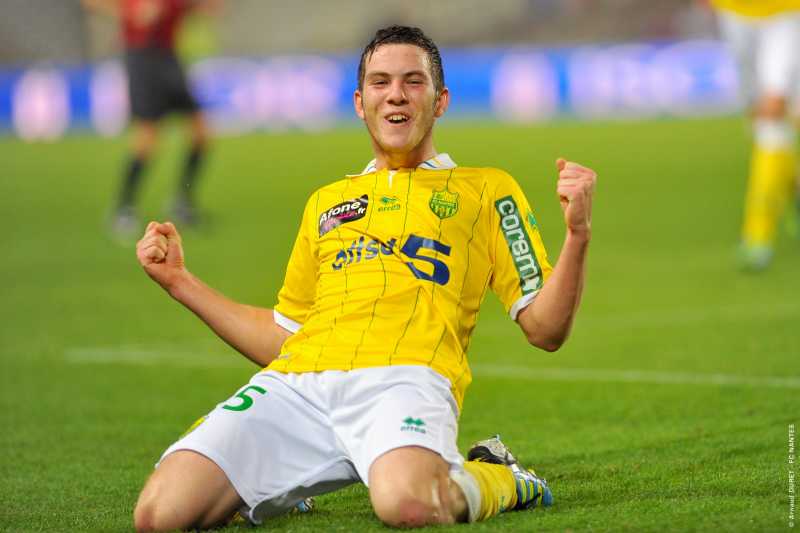 With the likes of Didier Dechamps, Marcel Desailly and Jeremy Toulalan having progressed through Nantes’ La Joneliere academy to become successful French internationals, Jordan Veretout has a lot to live up to if he is to be the next famous footballer to come through Les Canaris’ system.

Born in Ancenis, 23 miles outside of Nantes, Veretout made it into Nantes’ academy in 2003 before making his debut for the senior side in 2011 against Sedan. In the 2011/12 season, Veretout was a regular within the side with 35 appearances to his name in Ligue 2, scoring six and creating five goals over the course of the season. In 2012/2013, Veretout came into his own as he was an integral part of the Nantes team that won promotion to Ligue 1, chipping in with another 6 assists.

His performances led to a call-up to the France U20’s squad for the U20 World Cup in Turkey, in which he played every game as the French went on to win the tournament. He scored in the 4-0 victory against Uzbekistan and also showed maturity to step up in the final’s penalty shoot-out against Uruguay and he kept his composure which helped France to victory.

The 20-year-old’s start to life in Ligue 1 didn’t commence well. Having picked up an earlier yellow, Veretout picked up another for kicking the ball away which earned him a sending off in Nantes’ 2-0 opening victory over Bastia. Since then he’s gone from strength to strength, scoring against Lyon with a neatly-placed header and setting up a goal with a quality free-kick against Paris Saint-Germain. These are undoubtedly moments that have helped Veretout settle after an early slip up.

Since his start to the season he has been called up to the French U21’s squad, making three appearances including wins in qualifying against Kazakhstan and Belarus. He now has an excellent chance to establish himself at this level, as some of the U20’s squad has moved straight into the senior team and that has come under some criticism, Veretout will be given the time to grow in the U21’s ahead of the European Championships in 2015.

Veretout has played prominently as a left-sided winger in his career but has also played on the opposite side and as the number ten behind the striker. The latter position is currently where he plies his trade. He is quick, skillful with the ability to run at defenders at pace and also make good runs in behind for crossing or shooting opportunities.

His versatility in terms of positioning makes him more ‘pickable’ for whoever is in charge of team selection. If needed, Veretout has been known to work up and down the midfield. From the deepest positions to the most advanced. His hunger and drive to win the ball off the opponent is impressive but perhaps inconsistent at present. With the youngster being shifted from position to position, one can sympathise with his own confusion as to the role he is being asked to fulfil in the team.

He is arguably ambidextrous with his feet, enabling Veretout to get a shot away quickly  without having to adjust his footing. The young Frenchman also possesses the ability to fight for the ball in the air, probably due to his large exposure to this part of the game when going in for aerial challenges with numerous full backs.

He is clever with and without the ball, always looking to make runs which startle opposition or guiding others into the space with the right kind of ball. At the age of only 20, there is plenty more room for Veretout to grow as a footballer. There are defensive aspects of his game that need improving and he has shown that he can lose his head a little, but overall he has the technical ability. to be a good, if not a great, attacker for club and country.

Valenciennes: Sanchez out, Ariel Jacobs in?