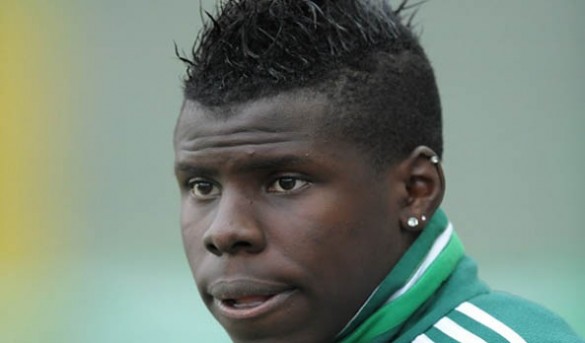 Here we look at young players across the globe who we believe have the potential to become the next big thing. At 18 years old, Kurt Zouma is being labelled as one of Ligue 1’s hottest properties. We take a look at his story and just how great a player he can become.

Zouma has been so impressive that many foreign clubs have been interested in acquiring him. Manchester United and Chelsea scouts have watched him on numerous occasions this season. Zouma has recently signed a new deal with St Etienne until 2017 to end the speculation for the meantime. Having signed a new deal, Zouma had this to day:

“This extension is a great vote of confidence in me from the club. St Etienne means a lot to me because it is where I was developed. This is a new step in my career. I still need to learn. I will also gain experience and I know that will help me to grow.”

Zouma has since stated that he will not leave the club at the end of the season, claiming that he needs at least one more year to grow and develop before making a move.

Zouma began his playing career at Vaulx-en-Velin, when he play in the youth team for six years, alongside his brother Lionel. Lionel left to join Sochaux in 2006, whereas Kurt waited for another two years before taking the trip to St Etienne at the age of just 14. Kurt remained in the youth set up here for another two years, but at the beginning of the 2011 season, he signed his first professional contract, and made his debut less than thirty days later on August 31st. Zouma played more in his first year than he could have expected and clocked up a total of 22 appearances for his debut season, impressing greatly with a defensive maturity well beyond his years. Zouma has made 10 appearances so far this season, but would have played more if it wasn’t for injuries.

Zouma has many strengths. He is fast, and tends to play the ball out from the back. He has the ability not to panic when in a tight situation; and his ability to pass, rather than hoof the ball, adds a certain amount of calmness to Saint Etienne’s game which often starts off attacking moves right from the back. Kurt does occasionally play the long ball, but these tend to be judged passes, rather than uncontrolled thrashes out of play. Zouma is also over 6 foot tall and is a fine player in the air. He provides an aerial threat from set pieces and has scored two goals so far in his career.

Zouma is by no means the finished product though. At the early age of 18, he has much room to grow and develop, in terms of addressing a few of the issues with his game. Zouma reluctance to go into tackles could be seen as a weakness, as opponents are sometimes able to beat him, as he does not enter a challenge strongly enough. Zouma does not tend to go into slide tackles. This can be seen as both a positive and negative, as on one hand, it means he is likely to be beaten more often, whereas on the other, he is less likely to concede fouls. Maybe this is why he has a very clean disciplinary record so far in his career. Zouma has also not filled out yet. He is fairly lanky, and needs to put more work in, at the gym, to make sure that he is not muscled out of the way. Perhaps this is why manager Gautier has occasionally played him at right back, where he can use his pace, and does not have to be as physical.

The youngster is already being predicted to be a future captain of the French national team. Zouma has made over 20 performances for France at Under 19 level and below, and was particularly impressive at the U17 World Cup. Zouma will soon be looking to make his first national team performance shortly, in a position where Les Bleus currently lack depth.

Zouma v England for France’s U17 team
[Courtesy of Fifa.com]

Overall, Kurt Zouma looks one for the future. His contract signing for St Etienne looks likely to only deter his suitors for the meanwhile, but if Zouma continues where he left off when he comes back from injury, an offer could be made soon. He is certainly one of Ligue 1’s hottest prospects.
Share FacebookTwitterPinterestEmail
previous