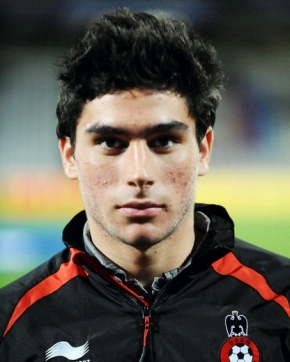 ‘Prospect’ is a series of articles which give you in depth insight into the next big players in French football. These are players we have been closely watching for a number months, collecting the suitable information to give you a truly thorough outlook on the next big thing. Today, we take a look at OGC Nice’s 16 year old Striker and Frenchman Neal Maupay.

Neal Maupay was born in Versailles to an Argentinian mother, and is therefore eligible to play for either Argentina or France when he reaches the highest level of international football. His family moved to the Cote D’Azur when Neal was just 5 years of age because of his father’s work. At the age of 6, the young boy found football.

He began at first playing on the weekends for Valbonne Sophia-Antipolis, a very small football establishment with just two large astroturf pitches and a stand barely big enough to seat 100, I know the club well. Maupay remained there for 5 years from the age of 6 until 11, when he made the 30-minute away switch to Ligue 1 outfit OGC Nice who persuaded Neal’s parents to let the promising talent join the youth academy.

Initially, Maupay started off playing up front because of his mature footballing brain and eye for space, which made him stand out from the rest. However, it soon became clear that the youngster was perhaps not strong or tall enough to play as a Striker, especially not on his own. Incidentally, the formation Nice currently use has space for just one Striker, Dario Cvitanich, who likes to play in that lone role, something which Maupay is trying hard to get better at.

Anyway, Maupay came on leaps and bounds in his 5 years in the youth academy, and at the start of this season, as soon as he turned 16, OGC Nice rushed to get his signature to enable the player to join the first team. Maupay signed a 2 and half year contract in January of this year making him one of the youngest in a OGC Nice 1st team squad ever, and, more importantly, binding him to Les Nicois.

On the 15th of September 2012, Neal Maupay made his professional debut against Brest and became the 3rd youngest player to ever do so in Ligue 1. Exactly 3 months later, on the 15th of December he became the 2nd youngest ever goalscorer in Ligue 1 in the final seconds of a game against struggling Evian.

He has already represented both the France U16’s and U17’s, but his international future is yet to be resolved. As his mother is Argentinian, he could potentially play for them or Les Bleus in the future.

At this moment in time, his footballing story is largely unwritten, but he is probably one of the most exciting prospects in French football. Claude Puel and the Nice coaching staff have admirably shielded him from the exposure of the French media and he is yet to give a proper interview. The Frenchman can be the best of the best but must remain with Les Nicois, who appear to have an impressive and long term plan for young Maupay. If any potential big name suitors come knocking in the summer, Maupay must be wise and reject them.