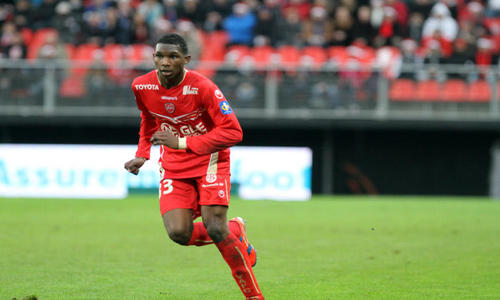 ‘Prospect’ is a series of articles in which we aim to provide in depth scouting reports on some the most exciting up and coming talents in the world of french football, giving you early access to players who could become the next big thing.

Part of the French side that made the final of the U19’s tournament in Lithuania this summer, 19-year-old Opa Nguette is another name to add to the list of impressive talent coming through Les Blues ranks.

Born on the 8th July 1994 in Mantes-la-Jolie, around an hour away from Paris, he joined local side Mantes who also have produced Senegal and Fenerbahce star Moussa Sow. He then moved to Ligue 1 side Valenciennes in 2011, making his debut for the club as a substitute in a 1-0 win over Troyes.

He made his name last year after making an excellent full debut against Evian just before the winter break where he won his side a penalty in a 2-1 victory. In his next game he would find his first goal, a lovely directed finish past Mexican international Guillermo Ochoa to earn his side a point away at Ajaccio.

He made a further 19 appearances last season, scoring on two occasions, but the season has only just begun for Nguette this campaign after been given an extended rest from his international duties. He came on as a sub against Marseille where he almost set up an equalising goal in the final minutes and his role within the team will only grow, especially since the departure of Vincent Aboubakar to Lorient this summer.

He also played twice in the under 19’s championship in Lithuania this summer, playing in two games as Les Blues got to the final before losing to Serbia. He may not be primed for a full international call-up, or even a step up to the U21’s just yet, but he’ll get time to develop both at club and U19 level.

His coach Daniel Sanchez said to Ligue 1’s website after his full debut: “It was his first start (against Evian) but he wasn’t afraid to show his talent. He fought hard and got to know what top-flight football is like. He got kicked a bit, but that’s part of the learning process.”

Gifted with pace, good feet and a willingness to try and beat his man, Nguette has impressed many Ligue 1 fans with his absence of fear attitude that can come with such youth. Exciting to watch, he’s one of those players fans will take a sharp intake of breath as they anticipate just what they will do to the opposition.

The only question marks hanging over his head is his ability to set up his team-mates, as he went the season without an assist and he also needs to up his goal tally to have a real chance of becoming a full international. At 19, however, he has plenty of time to grow whilst playing regular football for VAFC and if he improves quickly they may struggle to retain his services next summer.

He has been slightly frustrating to watch since the 2013/2014 season began, lacking the necessary composure in front of goal. He continues to operate as a left winger for Valenciennes and is probably assured more game time after the departure of Gael Danic to Lyon.