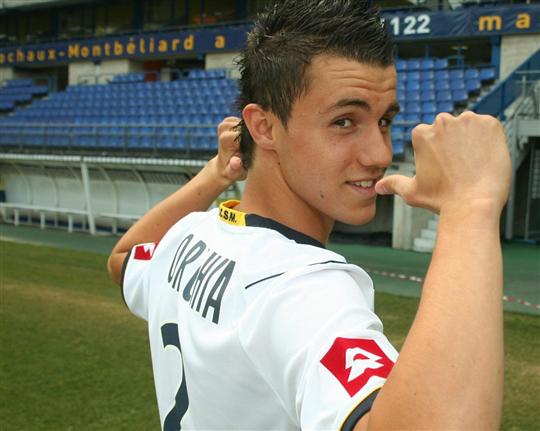 Prospect  is a section where we look at Ligue 1’s brightest young talents. At the age of 22, Sochaux’s right back Sebastian Corchia is one such player. In this article, we talk about his story so far, and what he can go on to do in the future:

Sebastien Corchia has a very short career, at the age of 22, playing for 2 professional clubs but holds an experienced youth career. Corchia was born in Noisy-le-Sec, France – a commune in the suburbs of Paris. His career kick started with a two year stint at local club Stade Olympique de Rosny-sous-Bois Footbal at age of 6. He instantly showed his abilities as a fullback and was quickly taken by French fourth-tier (Championnat de France Amateurs) club Villemomble Sports. INF Clairefontaine academy usually scout around France, and Sebastien Corchia was on top of their list. He was invited in 2003 ending Corchia’s 5 year stay. (Clairefontaine is a prestigious academy known for producing players into class stars). At age of 13, he was training with Clairefontaine while playing for amateur club AS Bondy on the weekends. With the experience of the academy, Corchia had interest from throughout France. After multiple invites to club academies he picked the Camp des Loges, the youth training centre of Paris Saint-Germain. The talent Corchia held was already noticed by several scouters as he left Clairefontaine to join Le Mans on an aspirant contract. Le Mans were playing in the Ligue 1 at the time but Corchia played for Le Mans’s Championnat de France amateur team. At the same time he was called up to France U-17 appearing twice against Czech Republic. He already had interest from Juventus at the time but his family believed he should stay in France. As he stepped through the ranks and featured for France U-18 and U19. He broke through the 1st team in 2009 for the team’s league match against Nice. The week after he played against Marseille, and as the end of the season approached he appeared 10 times for the club.

He then signed a professional contract with Le Mans until June of 2012, and was put as a regular starter for Le Mans by new manager Paulo Duarte. Appearing 35 times for the club, he scored 2 goals with 2 assists getting him a call up to the France U-21 at age of 19. The club was relegated at the end of the season but Sebastien Corchia had already showed his talents to the world at Le Mans. In his Ligue 2 season he appeared in 36 matches with 1 goal and 2 assists showing off his defensive abilities. At the end of the season he jumped back to Ligue 1 and joined fifth place Sochaux in the Ligue 1, penning a four-year contract. He appeared in 31 matches with 4 assists and was already playing in U-21 European Qualification for France. He had important assists against Marseille, St. Etienne, Lorient, and Valenciennes. In this current season he scored his first goal for Sochaux against Rennes in February and has 2 assists. His performances have been superb, racking interest from European clubs including Bayern Munich, West Ham, Werder Bremen, Lyon, Juventus, PSG, AC Milan, Monaco, Arsenal, Tottenham Hotspur, and Newcastle United! (Massive list that is!) Sebastien Corchia is known for being a cruel attacker on the wings with the potential of playing in all positions in the back. Put him as a left-back or a right-back or even a left winger he will succeed. Clubs are looking for defenders with the ability to rapidly run back and defend after helping out in attack, and Corchia is one of them. His crosses are dangerously accurate and his concentration on the ball is top class. He has excellent positioning and superb tackling skills that makes him a successful defender.  This season, he had excelling performances against Paris Saint-Germain, Rennes, and Marseille showing his capabilities to play against bigger clubs.

As you can see, he is strong in Crossing and Concentration. He likes to cross, plays the ball off the ground often, and likes to play long balls. He has weaknesses in Aerial Duels and Passing according to WhoScored.com.

Corchia has made over 50 caps for France’s U21 team and downwards, and will be hoping for a national team call up very soon.

Corchia has already been linked with a host of clubs all around the world, who are vying for his signature. Before the January transfer window, AC Milan were tracking the highly rated defender and a move seemed possible, when Corchia had this to say:

“For now my goal is to grow with Sochaux, but it is clear that I have a preference for Italy because I have Italian origins and I already speak the language well. Being followed by AC Milan is a real honour, it would be a dream to play in a club like that. AC Milan is a legendary team, where my idol Paolo Maldini also played.”

A move did not materialise, however, but Sochaux’s sporting director hinted that the player could move in the summer and said that the player did not move in January, because they could not find a replacement in time: “If someone were to come up with an interesting offer we would definitely consider it.”

Since these words were said, more interest has been shown. Bayern Munich are rumored to have inquired about the player, and Arsenal and Spurs also look set to battle it out for the player’s signature come July. Corchia has mentioned how he is open to a move away from Sochaux at the end of the season:

“I am happy when I am being mentioned with prestigious clubs home and abroad. I am working hard to reach the top level and play in a bigger club than Sochaux, it is everyone’s ambition to move to a big club. I am a big fan of the two leagues England and Germany, they are the best two leagues at the moment. At the end of the season, I will sit down with the club and see the next step.”

We (GFNFrance) understand now, that Arsenal have entered pole position in the race for the player. Our sources tell us that Arsenal and Sochaux have agreed on a 5 million euro release clause for the player, should Arsenal chose to make a bid. Arsenal therefore have a cheap option for a very good player, if fellow Frenchman Bakary Sagna leaves at the end of the season. We also now understand that this release clause only stands if Sochuax get relegated from Ligue 1.

It is clear that there is much interest in the player and Sochaux will need to survive in Ligue 1 to obtain any chance of keeping the player. He does appear to be another player who could be leaving Ligue 1 by September.