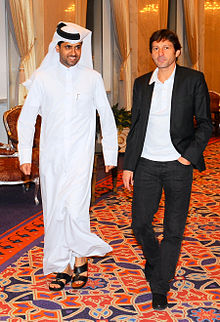 Since the departure of Carlo Ancelotti to Real Madrid, activities at PSG mean that the club appears to be taking a downward spiral even with the imminent signing of Edison Cavani from Napoli.

Yesterday, Sporting Director Leonardo announced that he would be resigning from his position at the end of the transfer market in September. The Brazilian has left the club for a number of reasons, we understand. Firstly, and most importantly, the 12 month ban he has received for pushing a referee against Valenciennes towards the back end of last season has meant that he is not able to fulfil the requirements of his role fully and so he sees no point in staying to do a job which he can not properly do. There are however a few other reasons which have pushed him out the club:

We understand that Leonardo was unhappy with the appointment of Laurent Blanc as the new manager as he sees him as weak, and Leonardo himself has a wish to become a manager, especially in Italy. The Brazilian also had strained relations with President Nasser Al Khelaifi, who appointed him in the first place, and they both came to an agreement that overall he should leave.

The loss of the Sporting Director is not the only thing that PSG fans have to worry about; PSG’s best two players could be on their way out.

Firstly, a Thiago Silva move to Barcelona does look extremely possible and Brazilian team-mate Adriano has announced that Silva told him that it would be a dream to play for the Spanish Champions. Player and agent deny that an agreement is in the place, but the centre back has been unable to hide his wish to move to the Catalan club. It appears to be a case of whether PSG will let him go.

[READ: An in depth article of this transfer saga here: https://www.getfootballnewsfrance.com/thiago-silva-has-an-agreement-with-barcelona/]

Swedish striker Zlatan Ibrahimovic shockingly could also be on his way out of Paris, according to today’s press. The player’s agent has met representatives of Real Madrid over a possible move to the Spanish side, claim Sky Italia and But, despite Mino Raiola assuring fans that the player would be at PSG next season.

We shall have to see what the further developments are on those two transfer sagas, but at this stage, PSG appear to be in a slight turmoil at a very important time.