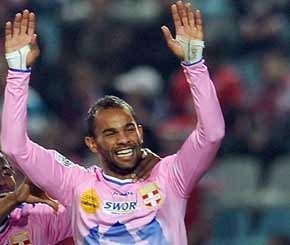 A Marseille spokesperson has revealed that Evian forward Saber Khilfa is set to join their club as a deal is ‘basically done’. The fee quoted is €2.5m, and Khilfa will sign a 4 year deal. It is suggested that the move should be made official in the next three days.

Marseille forward Songou goes the other way on a season long loan deal after he has failed to make an impact so far during his six months at the club. Marseille Sporting Director Anigo claimed that his side needed ‘1 or 2 strikers’ so whether this move signifies the end of their pursuit for Gomis is unknown.

This transfer comes out of the blue just a day after it was revealed that Montpellier had withdraw from negotiations after having a third bid of around €2million rejected.

Khilfa is the second key attacking player to leave Evian this market and they need to sign players to strengthen their chances of survival.