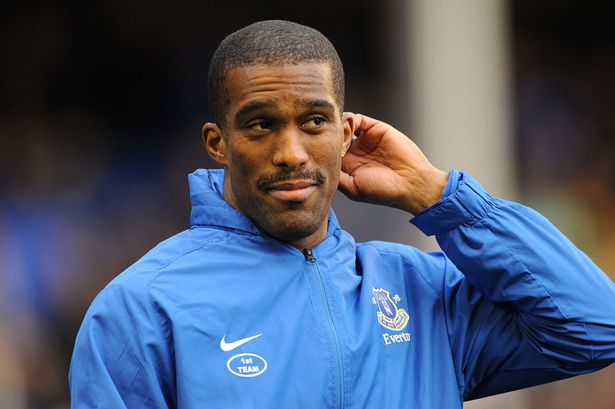 The opening of the transfer window signals the beginning of a great sense of anticipation surrounding a club with potential arrivals at the forefront of every fans thinking. Clubs are continuously in pursuit of players that can add a greater sense of quality to their squad. Despite the increasingly frantic movement which intensifies towards the closing moments of the transfer window, it is essential that clubs hold onto key existing players. A player that has managed to hold his own in the Premier League for over a decade is Sylvain Distin.

The Frenchman has plied his trade in England since 2001 and even though he is reaching the latter stages of career, Distin’s performances continue to help Everton achieve respectable league standings season after season. The 35-year-old has made over 130 appearances for the Merseyside outfit and has established one of the most effective central defensive partnerships in the league with Phil Jagielka.

Born in Bagnolet, France on 16 December 1977, Sylvain Distin began his playing career at French non-league side Joué-lès-Tours and the following year joined Tours. His first professional contract came after a year with Tours, signing for then Ligue 2 side, Gueugnon. An impressive campaign with Gueugnon – during which he won the Coupe de la Ligue in 2000 – earning special recognition from Paris Saint-Germain (who signed him up).

His spell with the capital club was fairly short-lived and after one season, was loaned to Newcastle United. Distin made 28 appearances for the Magpies and the club were keen on making the move permanent. However, Distin chose to join Manchester City for a fee of £4 million in 2002. Constant performances of a high standard lead to Distin being named the club’s Player of the Year in his first season and was given the captain’s armband at the start of the following campaign.

He made a total of 207 appearances for the club, scoring six goals. His 5-year-deal with Man City came to an end in 2007 and seeked a fresh challenge, opting to sign for Portsmouth. He won the FA Cup in 2008 and was named club captain after Sol Campbell’s departure. Everton paid £5 million for the defender in August 2009 and put pen to paper on a three-year deal. He has remained at the club ever since.

The Toffees had not conceded in the league at Goodison Park since March 2013 until their 3-2 victory over Newcastle on 30 September 2013 and Distin played an integral role in this somewhat incredible achievement. Distin’s abilities are highlighted through his physical presence and the way in which Everton’s back four complement each other.

Standing at 6 foot 4 inches, Sylvain Distin holds an instant advantage in any aerial battle as well as providing a threat at the other end of the pitch from set pieces. He has, however, only netted twice in his Everton career, which may come as a surprise.

The combination of Jagielka and Distin provides the defence with a vast amount of experience. Joined either side by Seamus Coleman and Leighton Baines, the Toffees have a back line that many Premier League teams would be envious of. The experience and leadership skills of Distin and Jagielka creates a sense of solidarity and organisation. The wealth of experienced possessed by Distin also allows for great anticipation and a brilliant reading of the game. Interceptions and breaking up play are just a few qualities that can be attributed to the big centre half.

Accumulating a remarkable 417 Premier League appearances (at the time of writing), the Frenchman is one of the first names on Roberto Martinez’s team sheet. His height means there is very little chance for the opposition to win the ball in the air, while his strength is utilised effectively in every attempt to win the ball back. Despite his advancing years, he covers the ground well and is able to chase down opponents. Leighton Baines’ bursts down the left touchline means that Distin is often closer to the touchline than would be expected of a left-sided centre half, filling the pockets of space that are created by Baines’ forward movement.

An ever-present in David Moyes’ Everton side before the Scot left to take over at Manchester United, Distin has begun life under Roberto Martinez continuing his rich vein of form. Everton were the only club in the top tier of English football to remain unbeaten after 6 games. With Martinez’s footballing philosophy, Everton have become a side that possess a greater threat going forward, often breaking at speed and stunning defences with the speed of Kevin Mirallas, the technical ability of Ross Barkley and the sheer strength of on-loan frontman, Romelu Lukaku. Distin is sure to thrive under the managerial leadership of the spaniard and is likely to be a key component in the way that Martinez has set up the club. Distin will be relied upon to win a considerable amount of challenges on the ground as well as in the air and begin any potential attack.

Turning 36 this season, it is unclear as to whether or not Distin will be given the option to stay on for another season at Goodison Park when his current deal expires in the summer. However, if his performances continue to impress, it would be foolish not to consider the possibility of extending the Frenchman’s deal.

In the eyes of many, Sylvain Distin is one of the most underrated players in the Premier League. Even if he isn’t an Everton player beyond this season, Distin’s services will be acquired by another Premier League team as he is more than likely to proceed with performing consistently. The only downside to the career of a truly great player with an equally impressive track record is the overlooking for a call up to the French national side. Despite never playing for his country, Distin’s career has been extremely successful and long may it continue.

Adil Rami and Valencia: The Beginning of the End?