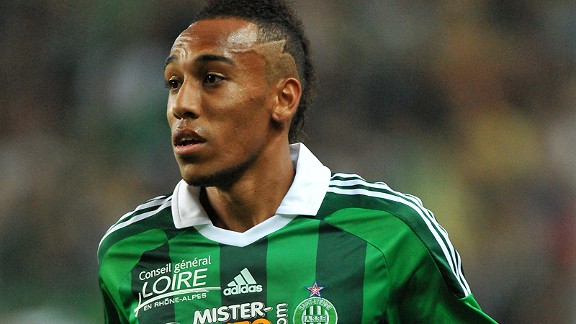 Keep track of the transfer situation of Ligue1’s in demand man: Pierre-Emerick Aubameyang:

Saint Etienne CEO Romeyer has admitted it is a great move for Aubameyang should he go to Dortmund.

Dortmund Sporting Director Zorc has confirmed that they are close to signing Aubameyang.

Kicker claim that Aubameyang will sign a 5 year contract with Borussia Dortmund until 2018. Fee to be €13m excluding bonuses.

Sky Italia alongside a host of other sources are now claiming that a €15 Million fee has been agreed between Borussia Dortmund and Aubameyang for the player.

RMC on the other hand claim that the player has agreed a contract with Dortmund, but a fee is yet to be agreed, although discussions are currently taking place.

Get French Football News understands that no deal is complete with Dortmund for the transfer of Aubameyang. The player is reportedly currently there to negotiate a deal to sign for the club. However, there is no foregone conclusion at this stage that the player will sign for Dortmund. However, we have learnt today that Everton were never actually in the race for the player.

Aubameyang’s agent has now revealed his admiration for Borussia Dortmund which once again suggests that this transfer is a strong possibility:

‘Dortmund is a very very good club. I love the football they play. Klopp is a genius’

@dimarzio now understands that Pierre Emerick Aubameyang has undergone a medical with Dortmund and the press conference to confirm the signing will be on Sunday.

‘Bild’ are now quoting the transfer fee which will be agreed at more like €13 Million rather than €15 Million.

According to Le Progres, Aubameyang and his father met with Borussia Dortmund officials on Saturday to explain their situation.

Kurt Zouma’s agent has dismissed the report that Newcastle will make a €29m joint bid for Aubameyang and his client as ‘completely false’.

According to sources close to Aubameyang’s representatives (revealed by But), only one formal offer has been received for the player, that was a €9m offer from Bayer Leverkusen.

Le 10 Sport claimed today that Dortmund had submitted a €12m offer for the player.

‘But Football Club’ deny these reports and have a close relationship with the player.

‘For the moment I am in contact with clubs. I have talked to people on the telephone. I am listening to everyone and respecting their offers. I insist we will take he decision with Saint Etienne and not alone.’

‘Of course it is best for everyone involved that this is resolved as quickly as possible. It is a decision that we do not need to panic in though. This is a very important step in my son’s career and we must do it right and Saint Etienne must be happy too.’

Aubameyang talked to Sky Sports about a potential move to Newcastle:

“I will choose England before any other destination. My dream has always been to play in one of the top two leagues in the world. Newcastle is a good club and St James’s Park is a monumental stadium where there is passionate fans.”

Eurosport understands that Atletico Madrid is Aubameyang’s club of choice, they claim should they make a reasonable offer.

France Football claim that Newcastle are preparing a stunning €29m offer for Zouma and Aubameyang.

Get French Football News understands that there is no agreement between Newcastle and Aubameyang whatsoever.

Eurosport are reporting that Newcastle have had an 18 million euro bid for the player turned down by St Etienne due to the fact it does not meet the supposed 20 million euro bid from Russian side Anzhi Makhachkala. Newcastle were very interested in the player in January and have been continuously linked with the Gabonese international since. This is, at this stage, unconfirmed by us.

Get French Football News understands that Swansea, in their current state (If they do not sell anyone), have been priced out of this race and do not have the funds to compete to sign the player any longer.

Le 10 Sport claim that Swansea have made a 12 million euro bid for the player, and although unconfirmed, even if true, this bid is likely to be rejected as it is below St Etienne’s estimation for the player.

Aubameyang himself has confirmed, however, that he has met Swansea manager Michael Laudrup and was impressed, but has admitted that he does not see himself going to the Premier League club due to their lack of reputation.

Aubameyang has also been linked with a range of other clubs. His father has mentioned that a move to Monaco is possible:

“When you see the Monaco project, this will be a serious competitor of PSG. This kind of club will be successful in a year or two. That is what I am now looking for my son.”

Aubameyang has also confirmed his interest in moving to Germany and has met Leverkusen’s Rudi Voller on various occasions,

Fiorentina, PSG, Roma, Arsenal, Tottenham, Inter Milan, AC Milan and Borussia Dortmund are all said to have an interest in the player.

Abidal: Transfer to Monaco in doubt