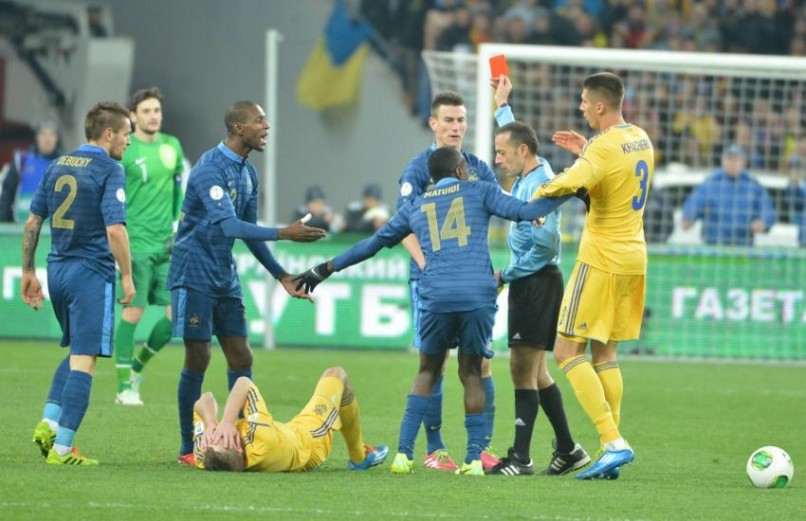 The morning after the night before. At the time of writing, about 12 hours or so have passed since France’s catastrophic 1st leg performance in their World Cup Qualifying Playoff against the Ukraine. France were out-shone, tactically out-smarted and simply did not want it as much as their Ukrainian counterparts. So where exactly did it go all wrong and can France turn it around in Paris next Tuesday?

Didier Deschamps’ decision to play a 4-2-3-1 formation showed his lack of creativity and inability to realise that tactical tinkering was needed in order to get a result away from home. Really, it showed he valued not becoming the fall guy if the plan went disastrously wrong (which it did) because this was a formation that had worked over the past month in what appeared to be the great French revival. Deschamps therefore had a justification for aligning his players in such a way. The Ukrainians had been preparing to combat these predictable tactics and it made their night much easier as a result.

Their consistent doubling up by the Ukrainian defence on Franck Ribery took the Ballon D’Or nominee out of the game and he returned to the invisible figure he has often been in the past in a French shirt, although perhaps through no fault of his own. Nobody has the right to blame Deschamps for picking Ribery to play, he is unquestionably a serious contender for ‘Player of the Year’ this time around, but the key man failed to deliver when it mattered most last night. Those moments of quality- a defence-splitting pass or a piece of tricky skill to confuse the opposition were lacking from the Bayern Munich man.

Olivier Giroud was ineffectual and moaned even more than usual. It is difficult to argue that the last 18 months have been a period of great improvement and success for the Arsenal frontman, who has managed to establish himself in one of the greatest leagues in the world and, internationally-speaking, kept Karim Benzema out of Les Bleus’ setup. One thing that mystifies me is his horrendously unprofessional attitude towards refereeing decisions. This constant moaning and groaning every time an official disregards Giroud’s claim for a free kick or what have you certainly affected the way in which Mr Cüneyt Çakir went about treating the French for the rest of the match. Giroud’s despondence as the target man meant that France were generally forced to look elsewhere to build attacks, with incisive passing on the surface. Unfortunately, the French were not moving the ball at a quick enough pace and the Ukrainians’ pressing game easily subdued the majority of these attacks before they became truly threatening.

There was generally a lack of fight and determination from the French starting XI last night compared with the Ukrainians who were playing as if this was a game of the highest importance. Perhaps you can blame Deschamps for not giving a more rousing pre-match team talk, but the onus is really on the professionals in that starting XI to give their all and take pride in playing for the French national team.

Only Patrice Evra and Laurent Koscielny appeared genuinely combatant throughout the game, with the latter letting the pressure of the match (rather ironically) take control of his emotions, resulting in his lashing out at Kucher (and a red card). The Arsenal centre back also conceded a penalty, an uncanny habit he is developing in key matches for both club and country. It may have been a little harsh but Koscielny should know better than to wrap his leg around an opposition player in the penalty area and he ultimately must accept responsibility for the second goal. From that moment on his performance deteriorated. It was a shame, especially after a very solid first half display in stark contrast to France’s other centre back Eric Abidal. Incidentally, Laurent Koscielny will undoubtedly be banned for 3 competitive international games which will of course see him missing the 2nd leg on Tuesday, but he will also be banned for France’s first two group stage games in Euro 2016 (should France fail to overturn the deficit next week) because as hosts France (thankfully) do not have to qualify.

Why Eric Abidal is being at all considered for a role in the French national team at this stage of his career, let alone for the starting XI on one of France’s most pivotal matches in the past 4 years is completely beyond me. Yes, Abidal’s transformation from a life-threatening illness to becoming Captain of AS Monaco is incredible and the mental strength and audacity the former Barcelona player has had and continues to have is both impressive and inspiring. Yet, just because he begins to play regularly again at club level does not mean he merits an automatic slot at the heart of his national side’s back four; especially when the majority of the fingers being pointed at the dip in Monaco’s performances at the moment are being directed at the very man himself. What is perhaps more baffling is, in Deschamps eyes, he would rather play Abidal than either of Mamadou Sakho and Raphael Varane- two players who possess the same fight and willingness to put their bodies on the line for their country and who are unquestionably in better physical shape than the recently converted centre-back (Abidal has played the vast majority of his career at left back).

Unfortunately for Newcastle fans, their trio of players that did make an appearance last night for France were disappointing. Deschamps has failed to realise that Loic Remy has consistently been the weak link of the France attack when adopting this 4-2-3-1 formation. One cannot question Loic Remy’s deadly goalscoring instincts and wonderful movement, but playing him out on the right wing just does not work. Unless Deschamps is willing to be bold enough to start Remy ahead of the likes of Benzema and Giroud as the lone striker of the team then he is better off replacing the current Magpie with a Mathieu Valbuena or a Dimitri Payet who is far more creative and accurate in terms of carving out opportunities for team mates in more central and advanced positions.

Moussa Sissoko is yet to have an impressive game in a French shirt, and many pundits are questioning whether he is actually of the appropriate calibre to even be representing France. He is one of Deschamps’ most used substitutes this calendar year but he is never able to make an impact. His liveliness is positive, but he never seems to be able to create the necessary space for himself and get enough power behind the ball to threaten the opposition goalkeeper; it is usually one or the other.

Mathieu Debuchy has been able to convince Deschamps that he deserves a place over the much more established and well-rounded right-back in Bacary Sagna because of his noticeable impact when going forward. This is all very well when France come against weaker opposition like Finland or Australia because there is little defensive work to do. However, his frailties on the back foot were exposed last night when he failed to close down the opposition leading to Ukraine’s first goal of the evening. One cannot necessarily blame Debuchy, it is simply a weakness of his that he has so far been unable to stamp out of his game. The blame lies more with Deschamps for failing to realise that Sagna would have done a much better job on the night.

The Newcastle man who probably has the most valid claim for a place in the starting XI did not feature in Ukraine last night. Yohan Cabaye, although he has had a more subdued 2013 for Newcastle, always seems to cause havoc in a French shirt. His powerful shots from outside the box provide an accurate source of pressure on the opposition goalkeeper which France lacked. Although the strength defensive midfield partnership of Blaise Matuidi and Paul Pogba is growing from game to game, Deschamps’s decision not to bring Cabaye on in the second half confused many.

Can France turn it around? If Didier Deschamps does not rest on his laurels and formulates a creative tactical solution that has the right balance of ability to enable France to send large numbers forward whilst ensuring that the defensive players remain vigilant and disciplined then there is no reason why not. In fact, Deschamps should be doing absolutely everything to send France to the World Cup. After all, his job depends on it.