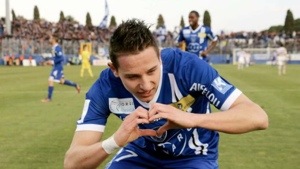 As we enter the final two days of the Summer transfer window, Florian Thauvin still remains a Lille player, but for how long? Despite unsuccessful talks between Lille and Marseille today, Thauvin is looking closer to becoming a Marseille player than ever before.

After it was reported that OM made a €10 million bid plus bonuses for the U20 World Cup winner, talks preceded. As said by Marseille’s Vincent Labrune, both sides are sticking to their guns: The situation remains as follows:

1) Marseille want the player and he is their main target for the rest of the window.
2) Florian Thauvin’s main priority is Marseille. He does not want to move abroad and definitely doesn’t want to stay at Lille.
3) Lille have realised that they need to sell the player, but would prefer to do so to any club but Marseille.
4) Marseille’s offer remains the only bid on the table. Lille are close to being forced to accept it.

Talks will continue tomorrow and as mentioned. Progress is expected. Lille will sell the player and they will have to budge tomorrow as otherwise the move will just be too late. There is still the small possibility that Thauvin stays at Lille and rots in the reserves for half a season, but this is highly unlikely.

We, Get French Football News, can also confirm that despite reports yesterday of a Newcastle bid for the player, this never actually happened as he is seen as an unrealistic target.

Expect movement on this one tomorrow. As Lille president Seydoux says, “the wheels are in motion.”