Ajaccio: Mutu, Popescu and Belghazouani out 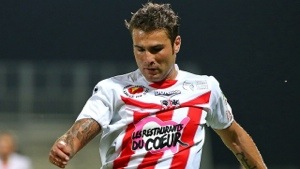 There have been some very interesting developments in AC Ajaccio’s transfer situation so far today. Get French Football News understands that both Adrian Mutu and Stefan Popescu have terminated their contracts at the club. The club has now confirmed this. In addition, Chadir Belghazouani has also agreed a loan deal to move to White Star Brussels until the end of the season. It is perhaps unwelcome news for the club who sit rock bottom of Ligue 1 with just 9 points.

Adrian Mutu and Stefan Popescu had both had disappointing starts to the 2013/14 season. Mutu had played just 9 games, scoring no goals at all, which was disappointing considering his 11 goals in 28 games last season. Popescu has had a similarly unsuccessful start, playing in just 6 games, with only 193 Ligue 1 minutes in total, just over 2 whole matches. Clearly, their decisions to terminate their contracts have come after reviewing their seasons so far.

Chadir Belghazouani, on the other hand, has managed to seal a loan move to White Star Brussels. The forward player was yet to score for the struggling side this season, but was offered a deal until the end of the season by the Belgian outfit. With all these players leaving, it is unclear whether Ajaccio are getting rid of dead-wood or weakening their squad at a crucial stage in the season. It will, though, all be clear by the end of the season.

Adrian Mutu is actively negotiating with two Romanian sides and Get French Football News can confirm that one of them is indeed Petrolul Ploiesti. Steaua Bucharest have also reportedly been in contact in recent weeks but whether or not they will continue their pursuit of the ex-Chelsea forward is unclear, especially after the signing of Claudiu Keseru. The player had also been interesting Rapid Bucharest. His options are certainly not limited.