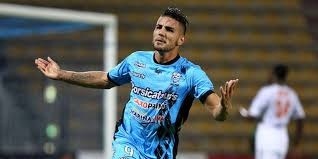 Tours’ 24 year old striker Andy Delort has one of the most complicated transfer situations in France at the moment.

With the help of our colleagues at La Nouvelle Republique, we look to break it down for you.

Delort is one of the most wanted French forwards on the market, after finishing off as Ligue 2 joint top scorer during the 2013/2014 campaign.

We are aware that the player has an offer from Atletico Madrid, who have drawn up an initial four year contract, which would see the player loaned to Elche for the first season of those four years without an option to buy of course.

According to our regional colleagues, there are several reasons why Andy Delort wants to join Atletico, despite the fact that they have yet to offer the required €5m to Tours which will allow a sale to go through. First of all, the pride of joining the European vice-Champions, second of all the fact that there is no recognisable and established striker in the squad who knows La Liga which, his camp believes, will mean that Delort has a reasonable chance of establishing himself in the first team and finally, a loan to Elche is something which he could see himself enjoying. Delort and his agent have already visited Elche and their training ground and have been impressed by it. His father also has had discussions with some of their staff. Delort also speaks Spanish.

Atletico have thus far only offered €3.5m to Tours, which has not been accepted.

“There are several foreign clubs that are interested: in England, Belgium, Spain and Germany. There is a lot of interest. Andy has not yet decided but he has another two years of contract with Tours and there is a fee to pay… and until an agreement has been reached between the clubs, I can’t discuss a contract with other clubs. Once the fee is agreed, things will move very quickly indeed…”

Atletico Madrid is a big possibility, but Schalke 04, Standard and Anderlecht have not given up. Leeds United are set to have a meeting with Tours shortly and Southampton have been in touch also.

The situation is not more straightforward yet.

Clément Michelin arrives in Bordeaux ahead of move...