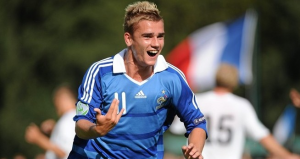 Real Sociedad’s starlet attacking midfielder Antoine Griezmann spoke about his January transfer window as well as the club he loved as a kid to our colleagues at RMC today:

‘I will not say no to playing for a club in my home country. Ligue 1 is becoming a more and more attractive proposition, year after year and it is bring big players there.’

‘When I was very little, I was a Marseille man. But when Sonny Anderson arrived at Lyon, let’s just say I changed my mind…’

In response to rumours that he had visited PSG recently, the young Frenchman currently gunning for a place in the French national team for the World Cup this year replied with:

‘Maybe I have a doppleganger. No, I will be staying relaxed at my home here. I want to finish the season with my club. The rest…it is something to look at another time. I have not been contacted by any clubs.’

The player was recently quoted saying he would happily go as the fourth choice goalkeeper for France to Brazil in the summer if it meant that he could play a part in the World Cup. It appears that Griezmann is fully focused on that and any move from Sociedad would jeopardise his already outside chance of making the plane to Brazil this summer.