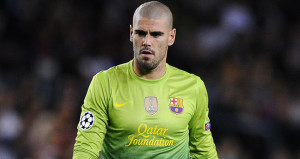 Get French Football News understands that Barcelona goalkeeper Victor Valdes has been approached by Ligue 1 big spenders Monaco about a possible move for this summer.

The player has announced he is going to leave Barcelona at the end of the season on a free after his contract expires in June.

AS Monaco have been interested in the player for quite some time but Valdes wants to be certain of playing for a side with Champions League football next season. Therefore, he is unwilling to commit to any deal so early on in the various title races going on around Europe.

Lacina Traoré expected at West Ham for a medical on Thursday