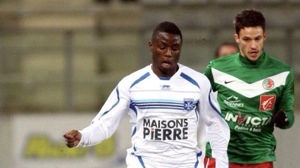 On Sunday, in the columns of ‘The Republican Yonne’, Guy Cotret stated that AJ Auxerre had officially received an offer for their striker Paul George Ntep. An offer that might have come from Stade Rennais according to many sources.

Information that the AJA leader can confirm to But!: “I signed a confidentiality clause to which I am bound. All I can say is that I have heard this rumour” he explains. Several believe that this indicates that these rumours are correct.

The President was scheduled to be in late negotiations through last night but he was forced to revise his plans because of the hesitation of the Burgundian attacker:

“This is a complicated transfer to finalise because there are several parts. The willingness of the club, the player’s … We have advanced in negotiations with the French club that I mentioned Sunday. For his part, Paul George is thinking. We are given another 24 hours to try to come to an agreement.”

The main concern today is that the of the Franco-Cameroonian, who went to London to visit the facilities of a club. “He does what he wants from his weekends. In any case, I read they were talking to QPR. He was not at Queens Park. Was it Arsenal? Without a doubt! I’m not foolish. But in any case, I have no contact with an English club. There is the French club of which I speak has made an offer. After that, maybe the player and his agent have other contacts …”

“We are not at €8 million but we are in good negotiations.”