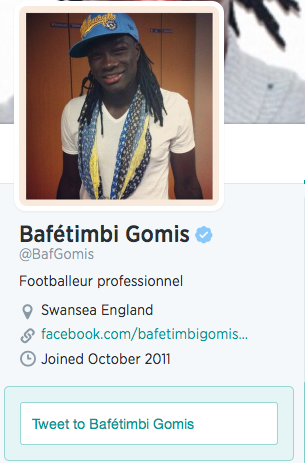 After Bafetimbi Gomis finally completed his move to Premier League side Swansea, many of the club’s fans were extremely excited to see how he would fare in a new league. In moments like this, first impressions are very important. However, Gomis has gotten off on the wrong foot, with a blunder that most Swansea fans would not be too pleased with…

On his official Twitter account, @BafGomis, Gomis changed his location to ‘Swansea, England’ following his move to his new club. Of course, as every Swansea fan will tell you, the Swans are in fact a club based in Wales, not England. Let’s hope that his goalscoring makes up for his geographical faux-pas…!