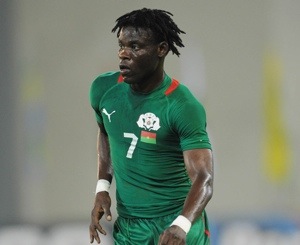 CA Bastia have successfully completed two deals this evening. They have signed midfielder Florent Rouamba on a free and have secured the loan deal of Chateauroux forward man Jonathan Rivas until the end of the season. This double swoop will go some way to helping CA Bastia escape from the foot of the Ligue 2 table and try to prevent them from being relegated to French football’s third tier.

So, who are these two players and how can they help CA Bastia’s bid to avoid relegation? Florent Rouamba is a strong midfielder from Burkina Faso who has been capped extensively by his country. He is a defensive minded player, and will sit in front of the back four and do the dirty work that other team mates don’t like doing. His fighting spirit and organisation may be just what the struggling side need.

Jonathan Rivas is a 21-year-old striker whose parent club is fellow Ligue 2 strugglers Chateauroux, and he only has one career start at Ligue 2 level, also having never scored a goal in his professional Ligue 2 career thus far. However, he is highly rated at Chateauroux and if his given an extended run of games at Bastia, he could turn out to be a crucial player for the club. His loan deal last until the end of the current season.