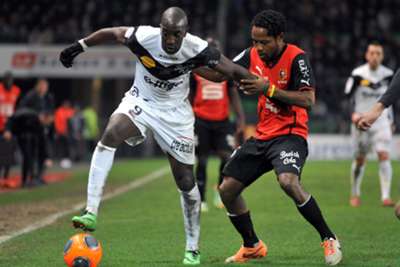 22:00: Round Up: Guingamp players and fans are bounding with joy at the full time whistle, while Rennes players look distraught. You have to say, only one team showed up today, and they will walk away with the trophy tonight. Commiserations to Rennes, but massive congratulations to Guingamp – they have done their fans proud tonight. As for me, it is time to say goodbye. Until next time, Au Revoir!

21:52: Guingamp see out the latest Rennes attack, and we are into the last minute of added time. Surely that is that now…

21:50: Penalty Appeal: Yatabare seems to be hauled down inside the box when through on goal, but the referee is unmoved. Well into 4 minutes of added time now. Guingamp are on the verge.

21:47: Rennes win a corner, but after a little bit of a scramble, Samassa dives on the ball and Guingamp breathe a sigh of relief. I must say, Guingamp have been mightily impressive today, and they fully deserve the win that is coming their way.

21:44: Into the last 5 minutes of normal time now, and Rennes need something verging on a miracle to get back into this at the moment. Aside from the fumbled Oliveira shot, they really haven’t troubled Samassa.

21:42: Close: Samassa almost has a shocker as he spills a routine Oliveira shot, but luckily for him it flies wide of the post and safely away for a corner, which comes to nothing.

21:39: Sankhare bursts through the Rennes defence, who have had a poor day today, but his touch is a little too heavy and he is crowded out. Yatabare was free on the right, but it is unlikely to matter.

21:37: Remember, the winner of this match is into the group stages of the Europa League next season! Hard to imagine Guingamp in Europe, but it looks like that will be the case if they hold on for the next 10 minutes.

21:34: In the last few minutes, Rennes have picked up the pace a little bit, and Guingamp are retreating deeper and deeper to defend their lead, but realistically Rennes need a goal very soon to salvage extra time from this.

21:30: Close: Guingamp almost extend their lead! From a lump up forwards, Beauvue finds himself onside and baring down on goal, but he is at quite a tight angle, and his shot across goal is narrowly wide of the far post. That would have been game over.

21:27: Still nothing going for Rennes at the moment, and they are running out of time to turn this around. The Guingamp fans, who flocked to the Stade de France in their tractors, are enjoying every second of this. Rennes fans look bemused.

21:23: Guingamp fans now shouting ‘Olé’ with every pass completed by their team. Guingamp still remain the team that looks most likely to score.

21:21: Rennes are taking a risk they probably need to take, as Konradsen comes off for Nelson Oliveira. That will be the formation change I suggested at half time, but will it signal a turn around in Rennes’ fortunes?

21:19: Even at 2-0 up, Guingamp are still looking to attack and increase their lead. With the way Rennes have been defending, you cannot blame them. Having said that, a goal for Rennes and it could be game on again.

21:16: Rennes win a corner on the far side, but, typical of their day so far, the delivery is poor and the ball is cleared at the near post by Mathis. Rennes need to find inspiration from somewhere to get back into this.

21:13: Close: Guingamp almost go 3-0 up! Yatabare is unmarked just a few yards out from goal yet again, but this time his close range shot is saved by Benoit Costil, who may have just kept his side in the Coupe de France final.

21:10: Rennes are lost at the moment – their game plan for the second half must have been killed by that goal. Grosicki comes off to jeers around the ground for Paul Georges Ntep. I must say, Rennes don’t look like turning this around at the moment.

21:07: GOAL: Rennes 0-2 Guingamp (Yatabare). What a start for Guingamp! More horrible defending from Rennes allows Yatabare a completely free header on goal, and, unlike in the first half, he buries the chance. Guingamp well in control now.

20:55: Round Up: As Martins-Pereira says in his half time interview, Guingamp have had all of the play in the first half, and a 1-0 lead is probably the least they deserve. Rennes are playing at about 50% of their potential, and are being dominated all over the pitch. They need a serious improvement, maybe even a change in formation, to turn things around in the second period. Let’s see how both sides fare…

20:46: And after that little spell, Guingamp are back on the ball again and dominating play as they did before the goal. Rennes are begin totally outclassed here at the moment.

20:44: Rennes have reacted well to going behind, as if it has sprung them into life, as Samassa is forced into a flying save after a cross was deflected towards goal. Maybe going 1-0 down was what Rennes needed to come to their senses.

20:42: GOAL: Rennes 0-1 Guingamp (Martins-Pereira). The Rennes fans will not be having fun now! Costil punches clear a cross, and it falls to Martins-Pereira, who powers in a shot through a crowd of players into the corner of the goal! You have to say, Guingamp deserve it.

20:39: Massive Mexican wave going around the Stade de France at the moment – good to see both sets of fans having fun with each other.

20:36: The pace of the match has just calmed a little bit in the last few minutes, which Rennes will be happy about. If they can get to half time at 0-0 and regroup for the second period, they will be very pleased.

20:33: Rennes are trying to keep the ball to calm themselves down a little, but credit to Guingamp, they look pumped up and are pressing all over the pitch, trying to win it back. Rennes yet to create a single meaningful chance.

20:30: Again, Yatabare is allowed an almost free header at goal, but he cannot direct it on target. You have to feel that Rennes simply have to improve, or a Guingamp goal is on the way.

20:27: Langil picks up the ball just inside his own half, and is allowed to just run at the Rennes defence. Yatabare’s run gives him space to run into, but his final shot at goal lacks power and is an easy saved for Benoit Costil.

20:24: In the last two or so minutes, Rennes have managed to get on the ball a little bit and stop the constant influx of Guingamp chances. If Rennes have gotten away with their slow start, they can count themselves very lucky indeed.

20:22: Once again, Rennes’ defence are caught napping. A free kick is swung in from deep, and Beauvue rises absolutely unchallenged in the centre of the box, but his header flies over the bar. Another half-chance goes begging.

20:19: Close: Guingamp come close once again. This time, Yatabare flings himself at a near post cross, but does not quite get the connection he wants, and the ball flies just wide of the near post. Guingamp completely on top at the moment.

20:16: After Rennes’ early domination of possession, Guingamp have really come on strong, and are bossing the game at the moment. Rennes are still giving it away needlessly, and the fans are getting a little frustrated.

20:13: Close: Guingamp have two fantastic chances to score! First, Beauvue’s far post shot is saved by Costil, and from the resulting corner Mandanne has a completely free header, with nobody near him, but can only head wide of Costil’s goal! Really should be 1-0.

20:09: Really scrappy start from both sides here, the ball is just stuck in the centre of the pitch at the moment, with no attacking moments to speak of thus far. Both teams guiding themselves into the game.

20:05: A few early challenges flying in here in midfield as the players just let their opponents know they are there, and Rennes are currently passing the ball around nicely in their own half. That may well be the pattern of this game – control from Rennes and counter attacks from Guingamp.

19:57: The teams walk onto the pitch and the French national anthem is played at the Coupe de France. OptaJean reminds us that Rennes have not won the Coupe de France in 41 years, highlighting how historic it would be if they were to win today. The teams are almost ready to go.

19:53: Neither Rennes or Guingamp come into this game in a particularly good spell of form. In the last 5 games, Rennes have won just the one game, while Guingamp have won just two. However, they did beat Lille and Monaco respectively in the semi finals to get here, so both are worthy finalists. Kick off is imminent, just over 5 to go!

19:47: Just over 10 minutes to go until kick off, and I must say the Stade de France is absolutely buzzing. The stadium is full of expectant Rennes and Guingamp fans, who will each be hoping for a historic win today, but only one of these teams can be crowned champion. Who will stand up and be counted?

19:42: Both sides have some good attacking talent on the bench to change the game late on. Rennes have the likes of Paul Georges Ntep and Nelson Oliveira on their bench, while Guingamp’s contains Rachid Alioui, who has been in good form recently for his side.

19:38: In terms of head to head between the two clubs, it looks like Guingamp tend to come out on top. In fact, Rennes haven’t beaten Guingamp since way back in 2004, with Guingamp winning 5 of the last 6 fixtures between the pair. Having said that, today is a cup final, and as they say, the form book goes out of the window.

19:33: So, it looks like Rennes are setting up with a 4-3-3 formation, with a midfield trio of Konradsen, Makoun and Doucouré, while Guingamp have just the two players in the centre of midfield, in Mathis and Sankharé. I reckon the midfield may be where this is won and lost, and Guingamp’s two will have their work cut out to deal with Rennes’ trio.

19:20: Welcome one and all to a very special live commentary. No Ligue 1 today, just a very exciting day for two of Ligue 1’s lesser-known clubs. Yes, it’s time for the Coupe de France final, with Rennes taking on Guingamp from 20:00 GMT. It should be an absolute cracker, so let’s get into some team news!