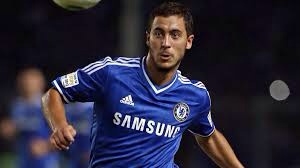 Chelsea’s attacking midfielder Eden Hazard spoke to Canal + this evening on a number of subjects including Ligue 1 and PSG.

On Ligue 1: “It remains one of the biggest leagues in Europe, even if it might never become the biggest because in terms of money they can’t compete with certain other leagues but I think it is still a great league. I think it is more of a league for younger players, judging on my experiences. I loved playing in France. It is very good for showing that you are capable. PSG and Monaco have done some good recruiting recently and of course I continue to follow the club of my heart, Lille. Always a Dogue. It’s not the same (way of playing) as it was with Rudi Garcia three years ago, but the players aren’t the same either. They’ve had to adapt.”

On PSG: “They are in the same world as Chelsea, Real Madrid and Bayern Munich. If they want to become the best they have to win the Champions League.”

On Zlatan Ibrahimovic: “Whenever I watch a big player play, you try and learn from what they’re doing. I’d much rather be watching the game than playing against him! He is always making a difference.”

On rumours linking him to PSG: “Every year I seem to be the priority of PSG and every year nothing seems to happen! I am good at Chelsea. Plus, if I was to return to Ligue 1, I think it would be to one club only (Lille). But in football you never know. At the moment, I am good at Chelsea and that’s what’s important.”