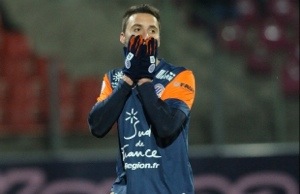 Get French Football News understands that Montpellier have agreed to loan out attacking player Emanuel Herrera to Argentinian side Tigre, after the French club’s manager Rolland Courbis decided that the player did not feature in his plans for the rest of the season.

The player is set to be loaned until the end of the season to the South American side although it is yet unclear whether or not the clubs have agreed a buy-out clause for Tigre to activate at the end of that deal.

The player left France yesterday to have a medical with his prospective next club.