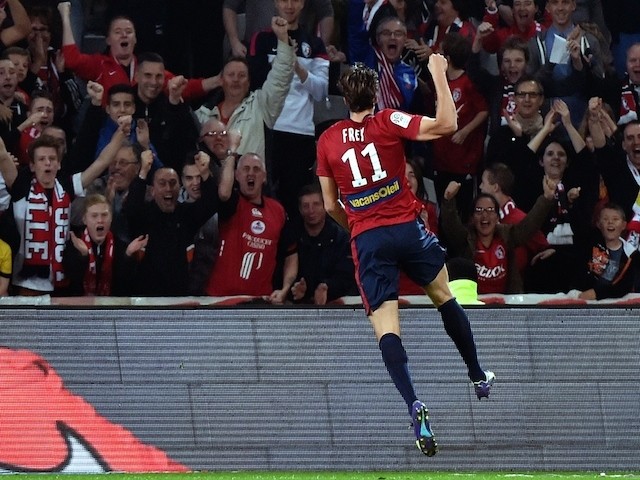 Owen Morgan previews Lille’s trip to England where they will face Everton in the Europa League.

A fortnight ago, Everton and Lille played out a combative, yet not particularly entertaining, 0-0 draw on matchday three of the Europa League. Lille return to Everton on matchday four, looking to reverse a worrying trend of results that has seen them slide down the Ligue 1 table. By contrast, Roberto Martinez’s Everton have enjoyed a successful run of results which has seen them go a month without defeat.

Lille’s 1-1 draw at home to St Etienne on Saturday was their first point in the league since late September, and their recent run of form leaves them languishing in 12th place in the Ligue 1 table. Rene Girard’s men have found the net just nine times in twelve league games this campaign, despite the impressive performances of Liverpool loanee Divock Origi.

Everton are still undefeated in Europe this season. A 4-1 opening matchday win over Wolfsburg has been bolstered by two battling draws to leave Roberto Martinez’s side in a strong position to advance to the next phase of the competition. The Toffees struggled defensively at the start of the season, but have condeded only once in their last four matches. Lille have failed to find the net on five of their last six visits to play English opposition, an ominous statistic for Les Dogues.

Roberto Martinez has hinted that he may rotate his squad for the visit of Lille, but defensive injuries mean that his back four may well pick itself. With John Stones still sidelined with an ankle injury, veteran Sylvain Distan is likely to start after Antolin Alcaraz dislocated his shoulder during Everton’s 0-0 draw with Swansea in their last Premier League match. Kevin Mirallas is still a few weeks away from competitive action, while the recently returned Ross Barkley could be rested as he is eased back into regular football.

Lille’s impressive youngster Marcos Lopes, also a loanee, will not be available, having suffered a reoccurrence of a hamstring injury he picked up last month. Marvin Martin is still out injured, along with valuable midfielder Jonathan Delaplace and striker Nolan Roux.

Tactically, Everton will look to push forward to claim a victory that should secure their safe passage into the knockout rounds. Romelu Lukaku and Samuel Eto’o have both been in impressive form of late, and will look to exploit Lille’s defensive weaknesses, aided by the pace and creative vision of marauding full-backs Leighton Baines and Seamus Coleman.

Lille would probably be happy with a draw; a point would keep them in touch with Everton and German side Wolfsburg, while a defeat would make it very difficult for them to progress. Nigerian keeper Vincent Enyeama will look to frustrate the Everton forwards, and could play a crucial role in ensuring Lille’s hopes in the competition are not dashed.

The experienced Nigerian goalkeeper could be pivotal if Lille are to progress in the Europa League. Everton are a threat going forward, particularly with the Goodison Park crowd urging them on. Enyeama has had a stuttering start to the season, and hasn’t covered himself in glory during Lille’s recent struggles but, if Lille are to avoid defeat, he will have an important role to play.

The Cameroonian forward has been in sparkling form for Everton. An experienced goal-getter, Eto’o scored a superb brace against Premier League strugglers Burnley recently, and will look to continue that run at Goodison against Lille. One of the great strikers on the European stage, Eto’o has not lost any enthusiasm for the game and will pose a significant threat to Les Dogues.

Everton’s good form, coupled with Lille’s poor run of late, means that the Toffees look too strong an outfit for Rene Girard’s men. Lille do not travel well in Europe, particularly away in England, and Everton, with the backing of the home crowd, should record a victory.