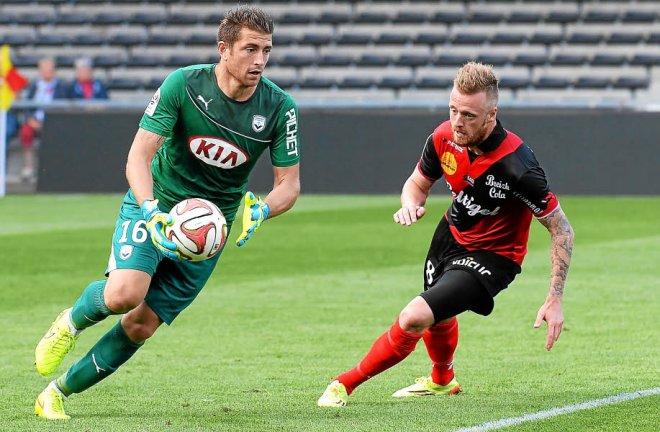 The European dream continues for En Avant de Guingamp on Thursday against PAOK Salonika at the Stade Du Roudourou, where the Bretons will be looking to ignite their European campaign after defeat to Fiorentina.

And the hapless Red and Blacks have suffered back-to-back defeats to Monaco, Metz and most recently to Montpellier, all by the odd goal. Fans of the club were imbued with confidence following that resounding 2-1 victory over Bordeaux two weeks ago, but the latest 2-1 defeat will be the most painful for the Guingampais as Beauvue had only equalised 5 minutes before Montpellier’s winning strike. Those recent agonising defeats have taken their toll on the team’s morale, manifesting in one of the most bizarre events ever to occur on a football pitch. A few choice words on the part of ‘keeper Samassa caught referee Kalt’s sensitive side and the goalkeeper saw himself red carded, but not before defender Benjamin Angoua decided to bat the red card out of the vulnerably outnumbered official’s hand. Kalt flapped around, eventually picking up the card and brandishing it at his original target Samassa.

Despite his own reckless show of outrage, Angoua escaped any punishment. Still, I expect the first choice ‘keeper will keep his place as his domestic ban will not prevent him playing in Europe’s second competition. Jocelyn Gourvennec’s lowly side now sit bottom of the now fairly mature Ligue 1 league table. Their 4 goals, scored by Mandanne, Beauvue, Daillo and Douniama, have simply not been enough to counter balance a defence conceding 1.5 goals per game. Gourvennec must undoubtedly be missing Mustapha Yatabaré, as a couple more goals this season would have turned those desperate 0-1 losses into draws, and the Rouges et noirs faithful would be looking down rather than up the domestic roster.

Panthessalonikeios Athlitikós Ómilos Konstantinoupoliton (PAOK Salonika for short) are experiencing somewhat of a different start to their domestic season. Based in the historically significant Macedonian city of Thessaloniki, the club made waves in Group K after their systematic dismantling of Dinamo Minsk. 6-1 was the final score of a clearly one-sided encounter, with Captain ‘Fantastic’ Stefanos Athanasiadis netting an 18-minute hat trick for the Aspromavroi.

The club are traditionally one of Greece’s strongest and, accordingly, the footballing gods have been kind to PAOK of late. The club currently sit atop the Greek Superleague having trounced OFI Crete to the tune of 4-0 on Sunday. Romanian international defender Razvan Rat, who has considerable experience playing among Europe’s elite from his time in (now homeless) Shakhter Donetsk, scored twice. Slovakian midfielder Robert Mak and aforementioned Captain ‘Fantastic’ Athanasiadis completed the rout. Founded in 1877 in Istanbul, the club migrated to its current location after years of insecurity during Greece’s struggles against Turkish dominance, finally settling at the Toumba Stadium in 1928. Since 1953 PAOK has served at Thessaloniki’s sole ambassador in the Greek football league, competing well at home and in Europe.

1974 saw their first appearance in the European Cup Winners’ cup final versus AC Milan and in 1976 the club won its first championship. Two “declines”, in the 1990s and mid 2000s, have preceded what is now becoming more of a stable era of the club under majority shareholder Ivan Savvidis and manager-come-cult-hero Angelos Anastasiadis, the latter in his third spell as manager of the Black and Whites.

Since the Fiorentina defeat, Gourvennec seems to have had trouble finding an XI and a formation to stick with. The 4-4-2 employed at Fiorentina with Mandanne and Marveaux up top was replaced by a more defensive set-up featuring Alioui as the sole striker with Mandanne dropped to the bench. Against Metz the traditional 4-4-2 returned but to little benefit. Last weekend Mandanne and Marveaux were both relegated to bench warming duties as Ronnie Schwartz partnered Alioui up front, with Mathis returning as captain. Gourvennec decided to swap in Dos Santos and hot-head Angoua for Leveque and Sankoh and his side subsequently to concede two goals in a match they deserved to draw. Such frequent changes might suggest a certain panic on Gourvennec’s part; he seems unable to find his best team.

Against PAOK we may see him revert to his most common defensive line-up of Leveque, Sankoh, Sorbon and Kerbrat. Three of these men saw out the last win against Bordeaux weathering the storm as the Girondins hauled themselves back into the game. Despite this, Angoua has proven himself comfortable on the ball and many among the fans find a partnership with him and Sorbon a promising one. In the middle we will likely see captain Lionel Mathis start with Beauvue on the right wing.

Up front, if Gourvennec intends to continue chopping and changing, we could see a return of Mandanne and Marveaux in that 4-4-2. But do not be surprised to witness a Schwartz-Alioui duo or even the lone-striker role assigned to any of the previous four mentioned. Although at home the Guingampais supporters will doubtless expect an attacking side, and the cynical formation we saw in Monaco will likely be discarded. One man who will be unable to add to his one goal this season for Guingamp is Moustapha Daillo, who picked up two yellows against Fiorentina. The midfielder has played six matches so far in Ligue 1, provided the first of his team’s two goals against Bordeaux. He was subsequently dropped for the losses against Monaco and Metz, but returned to action as a substitute for Pied in the 76th minute against Montpellier. In fact, Pied himself will not play on Thursday due to a thigh injury. Despite his domestic ban, ‘keeper Samassa is able to play in this fixture and Sambou Yatabaré, on loan of PAOK’s rivals Olympiakos, may be chosen to face his parent team’s domestic adversary.

With their hosts in such apparent disarray, those in the PAOK camp must be gleefully licking their lips in anticipation; they scored as many goals in their last match as Guingamp have all season. But it is not as much of a mismatch as it may seem at first glance. The Greeks have lost their last two away fixtures in Europe without scoring a goal and, as it happens, have not won in France since a 3-3 draw against Lyon in 1973. Nevertheless Angelos Anastasiadis’ men are not without experience of the French league, with Charles Itandje, Girogos Tvazellas and Alexandros Tziolis all having plied their trade in the French league system. However, of these men, only Tziolis made the starting line-up last time out against Minsk, the other two failing to make the bench.

They have also played three times since that victory, winning twice and losing out to Apollon Kalamaria by the odd goal. Such has been their attacking threat this season that they sit one point clear at the top of their division with a goal difference of twelve to the good. These goals have been shared among Mak (4), Facundo Pereya (2), Athanasiadis (3), Greece legend Dmitiris Salpingidis (1) and Iaonnis Skondras (1), with Razvan Rat grabbing a brace on Sunday. PAOK play a 4-5-1 with their captain leading the line and former Monaco man Tziolis having free roam in the centre of midfield. Both are likely to start. Changes are likely on the wings as Anastasiadis tries out some of his fringe players, keeping his heavyweights on the bench as a precaution. Israeli Eyal Golasi could start in place of Salpingidis and Dmitris Papadopoulos for Robert Mak. PAOK had 13 attempts on target against Minsk, of which six ended up in the back of net, but whilst the manager will feel his can change his attacking personnel, he is likely to stick with the defensive selection that has kept 3 clean sheets out of 6 matches this season.

Claudio Beauvue (EA Guingamp): Guingamp’s player of the month is a constant harassment when his opposition are in possession and is a favourite among the Guingampais with his readiness to challenge for loose and high balls, of which he wins the majority. His goal against Montpellier was a fantastic running header from the penalty spot after a stunning cross from Dos Santos.

Stefanos Athanasiadis (PAOK Salonika): The club captain has been amongst the goals of late and will be looking to add his season tally of 3 so far. The 25 year old has been with Paok since his professional career began and seems to have a knack for being in the right place at the most opportune time.

Here we have two teams in polar opposite positions in their respective leagues. Guingamp simply must start winning this season; although a win here cannot lift their Ligue 1 ranking it can provide a boost to morale which they will need if they are to regain any momentum. A scan over the fans’ forums reveals defiant optimism among the Stade du Roudourou regulars, but I feel a home win is unlikely. PAOK are bringing 600 fans with them to Guingamp ready for the 18:00 kick-off. They will not want to humbled against a side they feel they should brush past with ease, even given their less-than-illustrious away record in European competitions. This time it really is David vs. Goliath, but contrary to the traditional outcome, this time I feel Goliath will win.