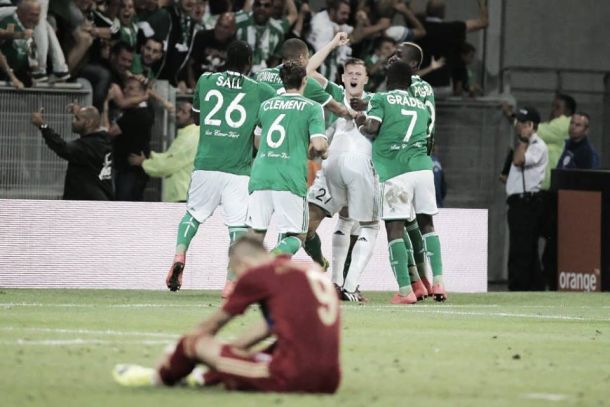 Josh Mart previews Saint Étienne’s daunting trip to the San Siro to face the black and blue half of Milan, Inter. La Beneamata (the Cherished One), as Inter are affectionately known by their fans, have started the group phase well with an away win at Dnipro and a comfortable home victory over Qarabag in Milan last time out. Les Verts, however, will be frustrated after 2 consecutive 0-0 draws which leaves them with a lot to do ahead of this double header with the Italian giants.

Inter’s league form hugely contradicts their perfect start in the Europa League as the Nerazzurri currently sit in a lowly 9th position in the table, 10 points behind leaders and rivals Juventus. Their form has been largely inconsistent and opposed to consistently poor, as they have beaten teams like Sassuolo heavily (7-0), yet also managed to lose to Cagliari 4-1 at home a few weeks ago. The weekends 2-2 draw with current coach Walter Mazzarri’s previous employer’s Napoli will leave Inter with mixed emotions. The performance wasn’t great but they showed good character to fight back to equalize after conceding late on in the match. They will be hoping to continue their good Europa League form against ASSE here.

St Etienne’s league form has been better, although still fairly inconsistent. Saturday’s 1-0 away victory against Lorient came at the right time for Galtier and his men after failing to win their previous 4 matches. Goals have been hard to come by so far this season, as despite ASSE sitting 5th in Ligue 1, they have only managed 10 goals in 10 games and are yet to register in the Europa League so far. Injuries have plagued Les Verts this campaign but Galtier won’t accept this as an excuse when his side travel to Milan in search of maximum points.

Mazzarri has a few injury concerns ahead of this match with Nagatomo, Osvaldo, Campagnaro and D’Ambrosio all having to miss out through injury. He should be able to count on the fitness of former ASSE player Fredy Guarin though.

With this in mind, I expect Inter to lineup in a variation of a 3-5-2 formation with the ever reliable Handanovic in goals. The back 3 is expected to be the same as v Napoli at the weekend, with Ranocchia and Juan flanking Vidic. Guarin and M’Vila will be pushing to start in midfield, but the form of young Croatian midfielder Mateo Kovacic has been extremely pleasing and he will be keen to build his reputation even more here. Sunday’s hero Hernanes is expected to start in an advanced midfield position supporting the Argentine duo of Icardi and Palacio.

Galtier still has many injury concerns with serious doubts placed on the fitness of key players such as Perrin, Hamouma, Clerc and Erdinc, despite the former pair starting the game v Lorient at the weekend.

Due to these injury concerns it will be interesting to see how Galtier opts to play this game. I would imagine that Sall will start at centre back alongside either Perrin (if fit) or Baysse with Tabanou and Theophile-Catherine at full backs. Clement or Cohade and Lemoine are tipped to be the 2 holding mifielders in ASSE’s typical 4-2-3-1 formation, especially after Lemoine’s late goal won Les Verts the game in Lorient on Saturday. Max Gradel could come in for Hamouma on the right of the offensive midfielders, supporting Van Wolfswinkel up top. Corgnet will be needed to provide that creative spark that St Etienne have lacked thus far in the group stages.

Icardi (Inter) – The young and controversial Argentinian international has finally proven his worth to Inter thus far this season, with 7 goals in 12 games in all competitions. The striker is pacey and has a good eye for goal and seems to have a good understanding with compatriot Palacio. St Etienne will have to mark him tightly tonight, and cut off the early balls that Hernanes and Kovacic will be looking to slip behind the defence.

Gradel (ASSE) – Max Gradel is a player with a lot of qualities; pace, trickery and work rate all being amongst them. However, like a lot of quick player, his final ball/shot is often inconsistent. If he is selected though, his direct pace will cause Inter’s less mobile defenders such as Ranocchia and Vidic plenty of problems.

This will be a huge task for ASSE but they know that they need to pick up at least a point here to prevent the second half of the group stages from becoming too much of an uphill struggle. Despite Inter’s prestige, they are not the side they were 4 years ago and Galtier has to keep this in his players’ minds and make sure they aren’t fearful of the name they are up against. If Inter play to their potential I expect them to win narrowly, but if ASSE can keep it tight like they have in previous games, they could frustrate Inter here.