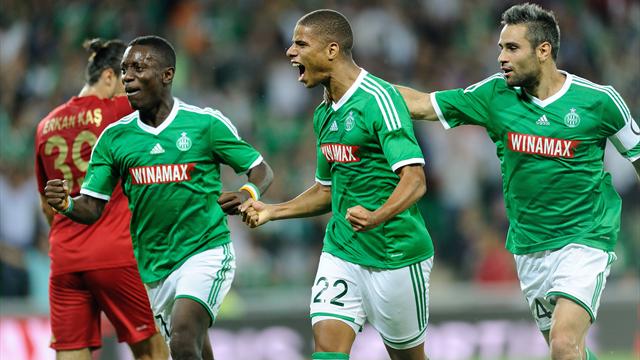 Josh Mart previews St Étienne’s home tie with Inter Milan as Les Verts look to take 3 points for the first time in this season’s Europa League. Remarkably, St Étienne are yet to score in the group phase… luckily they are yet to concede also. ASSE played well at the San Siro in the first part of this European double header and kept themselves in contention to qualify despite their lack of goal scoring prowess.

St Étienne league form in some ways reflects their Europa League form, as they have found goals hard to come by in Ligue 1, scoring just 12 in 12 games, only Nantes and Montpellier in the top half have scored less. Despite this, Les Verts still sit 5th in the standings and are just 3 points behind PSG in 2nd place. Saturday’s 1-1 draw away at Lille was a good point for Galtier’s men and it keeps them well in the hunt for the European positions.

Inter are finding things very difficult, like their city rivals Milan, in Serie A. The Nerazzuri sit in a lowly 9th position in the table after Saturday’s 2-0 defeat at Parma, in which Inter put in another poor performance. Coach Walter Mazzarri has come in for a lot of criticism, as Inter are a team used to challenging for the Scudetto rather than languishing in midtable- it was only 4 years ago that Inter won the Champions League in a historic treble for La Beneamata… how things have changed since then.

Galtier has been plagued by injuries to key members of his squad recently, and he still has a few concerns ahead of the game against Inter. Clerc, Monnet-Paquet and Cohade all missed the weekend trip to Lille through injury and are doubtful for this game. Erdinc did come on against Lille but I wouldn’t expect him to start this match.

With this in mind, I expect ASSE to lineup in their typical 4-2-3-1 formation which has served them well, at least defensively, in the Europa League thus far. Ruffier will start in goals with Sall and Perrin in front of him at the heart of the defence. Catherine is likely to start at right back with Brison and Tabanou battling for the left back position. Lemoine and Diomande wil start in holding midfield positions, particularly if Cohade doesn’t start. It will be a big bonus for Galtier to have Hamouma back in an attacking position on the right of the advanced 3. Gradel’s pace caused Inter problems at the San Siro and he could well start on the left side. Corgnet is expected to provide the support and chances for van Wolfswinkel in attack.

Mazzarri is without Hernanes and Campagnaro for this game but Osvaldo and Nagatomo return to the squad, although neither may start with Mazzarri having one eye on the weekend’s game against Hellas Verona.

I expect Inter to lineup in a 3-5-2 formation, with Vidic at the heart of the back 3, supported by Juan and Ranocchia. If Nagatomo doesn’t start, Dodo will continue to deputise at left wing back, with Obi a possible starter in the right wing back position due to Jonathan’s absence. Guarin is likely to start against his former club, alongside Krhin or Kuzmanovic in central midfield. The hugely talented Kovacic is due to start, behind Argentine duo Palacio and Icardi, with Osvaldo only expected to be on the bench. Mazzarri could opt to change formation and play a 4-5-1 as he continues to seek for some sort of form, but 3-5-2 is what he knows best.

Hamouma (ASSE)- Romain Hamouma has been a great player for Les Verts ever since he was signed from Caen in 2012. A player who has pace, trickery and a good understanding with his teammates, Hamouma is a fans favourite and they will be hoping he can deliver the goods against Inter and aid what would be a historic victory.

Kovacic (Inter)- Mateo Kovacic has a huge future in the game. The young Croatian playmaker was reportedly subject of a deadline day bid from Barcelona in the summer, which highlights his potential. A delightful passer of the ball and a decent finisher, ASSE will have to mark him tightly tonight to stop him orchestrating the play.

I expect this to be a tight game at the Stade Geoffroy-Guichard, with both sides playing in a similar way to the previous match. ASSE have the bonus of having a fantastic, vociferous home crowd behind them and they will be dreaming of a victory over such a prestigious name as Inter. One would be forgiven for expecting yet another 0-0 but St Étienne could sneak it.