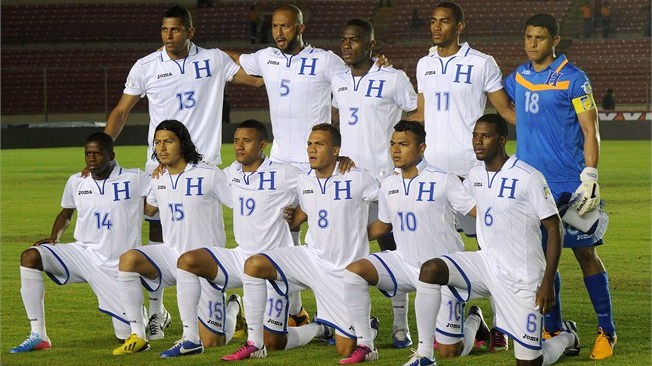 When France line up against Honduras on Sunday evening to begin their World Cup group game, few with doubt Les Bleus’ superiority, on paper at least, over the South American side. However, as we saw in Honduras’ last friendly against England, their coach Luis Fernando Suarez has created a strong defensive unit who will be hard to break down.

It is fair to say that the South American side are not expected, by most at least, to progress through the group stage. Honduras finished third in their qualifying group behind the United States and Costa Rica, managing to win only four out of ten matches. However, Honduras are very compact with their likely 4-2-3-1 formation and have shown throughout qualifying that they can be a threat from set pieces.

The main goal threat from Honduras comes in the shape of twenty seven year old striker Jerry Bengston, who managed to net nine goals during the South American side’s whole qualifying campaign. However, whilst having scored at a rate of almost a goal every two games in his forty-four appearances for his country, Bengston has not had a particularly good season at club side New England Revolution, having scored just two goals in his last twenty one matches.

Perhaps Honduras’ most recognisable player is Wilson Palacios. The Stoke midfielder has been ever present in their qualifying campaign and has the ability to stop attacks and move Honduras forward on the break. However, whether Palacios can cope with star players such as Paul Pogba and Karim Benzema, amongst others, is another thing, and he has struggled to pin down a starting place for his club side this summer. Thus, two key players for the side have failed to fire of late, which once again surely makes France huge favourites for the game.

Defensively, as well as Palacios, who will sit in front of the back four, Honduras have some strong players who have proven themselves in some of the world’s top leagues. Hull City’s Maynor Figueroa is one such name. Figueroa can play at left back or at centre back, but is likely to take up a more central role for his country in order accommodate Celtic star man Emilio Izaguirre on the left hand side. The 28 year old left back has played for the Scottish side for four years now and picked up the SPL player of the year award in his first season at the club. His runs down the left hand side and accurate crossing could cause issues for a French side who are debatably weak down the right hand side of defence.

The South American team do also have considerable international experience within their ranks and this is something which will be necessary in order to compete with a French side who are set to combine a mixture of experience and youth. Goalkeeper Noel Valladares has been ever present in the national side over the last ten years and was a major reason why Honduras were able to qualify for this tournament. The 37 year old produced a number of important saves, despite his age, and will captain the side in this tournament. Valladares is Honduras’ second most capped player ever and will be hoping to register Honduras’ first ever win at the World Cup.

Despite the experience that the South American side have in their ranks, few have played at the highest level and therefore they should be little match for a France side who have players from the best teams across Europe’s top leagues. To demonstrate this, one does not have to look any further than the likes of Juan Carlos Garcia, who has only played one game for Wigan since joining them this season. Roger Espinosa does have an FA Cup winner’s medal in his trophy cabinet, but has played the whole of the season in the Championship, the second tier of English football.

Overall, therefore, France should win the game comfortably as they have much better quality players. The likes of Paul Pogba and Blaise Matuidi should be able to control the midfield and France’s attacking options in the form of Karim Benzema and the likes of Mathieu Valbuena and Antoine Griezmann should be able to counter a strong Honduras back line.

One feels that Honduras will going into the game more looking to make their home nation proud than looking to get a result, Their draw against England in a pre-tournament friendly does, as mentioned, show that they compete with a team on a similar level to France, but Honduras surely must feel that they will have to rely more heavily on games against Educador and Switzerland if they are to progress. Anything but a win for France will be regarded as an embarrassment.

SC Bastia closing in on Benjamin André and Mathieu Dossevi