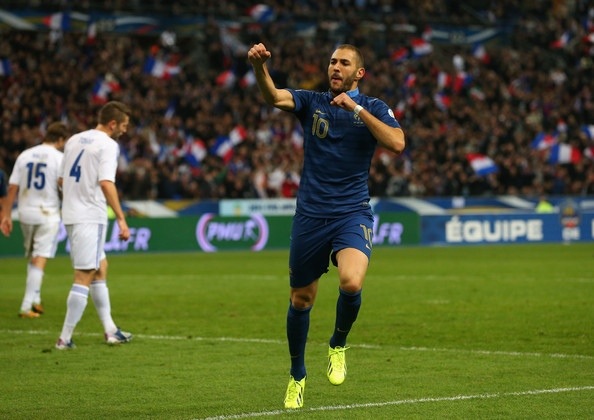 Didier Deschamps has named his final 23 man squad as he looks to prepare his side for the World Cup. However, he still has some important choices to make between now and then, and the draw against Paraguay was a resounding reminder that his team isn’t quite perfect yet. It is noticeable that France have progressed greatly since their debacle four years ago in South Africa. Deschamps’ team has gelled as a unit, and there is a perfectly integrated mix of young talent and experience in the Les Bleus squad. Although there are fitness uncertainties to integral players like Ribery, Benzema and Varane, there is still is a sense of optimism in and around Clairefontaine.

Firstly, Deschamps has yet to find his favoured back four, as he still needs to find someone to deploy next to Sakho in the centre, as well as making a choice between Sagna and Debuchy at right-back. Sakho, who was captain against Norway, can be very dominant in the air while possessing a passing range that eases the transition into midfield. It is believed that Raphael Varane is the most preferred partner, but Deschamps is in no rush for him to return to the side and is exploring other options like Laurent Koscielny and Eliaquim Mangala. Against Paraguay, Laurent Koscielny was deployed in the unfamiliar right-centre-back role and had an obvious struggle in adjusting to the position, often losing the ball with wayward passes in compromising positions. Although he made one crucial challenge, there is the lingering thought that if it was a better team, they may have capitalized on these errors and Koscielny, who has had an amazing season with Arsenal, will need to improve his decision making in this new position. Bacary Sagna was given a chance to state his case and although he worked hard, showing focus and attacking impetus, he had a problem retreating from attacking positions and conceded unnecessary fouls as a result. Sagna also lost Cacares for the Paraguay free kick that led to the equalizing goal.

The French team in general were poorly positioned for this set piece and a marked improvement is needed in this respect, because Group E opponents Honduras and Switzerland are known to be dangerous from dead-ball situations. Sagna is rivaled for the right-back position by Mathieu Debuchy who can be very instrumental going forward, as he proved against Norway by bagging an assist with a perfectly weighted through ball for Loic Remy’s goal. However, Debuchy can struggle to defend against very quick and skillful attackers and found himself having to foul Norwegian winger Daehli unnecessarily a few times, proving it will be an incredibly tough choice for the France coach.

France has a good set of athletically gifted, strong and technically savvy midfielders in Pogba, Matudi and Cabaye but their flaws were highlighted against Paraguay. Pogba’s aerial dominance, power and quick feet were on display as he put on quite a shift but he did tend lose the ball by overrunning it and misplacing a few passes due to complacency. Matuidi put in an energetic performance in which he worked for the team but if he and Pogba roam forward and France lose possession, Les Bleus can be very susceptible to counter attacks. This could be a big concern as Honduras are athletic and can thrive on the counter-attack, while Switzerland can sit-back and retain a defensive shape, then pounce on the counter. However, France has been very sound at the back in recent times, and Paraguay’s equalizer was their first goal conceded at home since March 2013.

France had come off a clinical 4-0 win against Norway with an impressive showing from a dynamic trio of Griezmann, Valbuena and Giroud. Against Paraguay, Deschamps opted to play Remy ahead of Griezmann but Giroud and Valbuena remained. Valbuena began the match in the same style he finished the other, as he tried to fasten a chance for Matuidi, but the pass was cut-out by the keeper. His eagerness to win the ball and the combative manner in which he manoeuvred around the box highlighted why he should start in Brazil. However, France were somewhat naïve going forward, leading to Les Bleus being very wasteful with their chances. Remy worked well and found himself in very good positions but squandered most of his chances as he ended the first half with 4 shots with none on target.

Overall, he gave the idea that he may work better as an impact-sub rather than a starter, so that he can exploit tired defences. Giroud was given another chance to stake his claim for a starting spot as Benzema was left on the bench with a meagre chance of playing. Giroud worked tirelessly, winning most of his aerial battles, and was very industrious in producing chances for teammates whilst being heavily involved in build-up play. However his eight shots, which are the most for a player under Deschamps, didn’t bear a goal. It can be said that he could have been more selfish and taken up more scoring positions considering he found himself out wide in situations where he could have profited more by being in the box.

The Remy-Giroud partnership was very encouraging as Giroud was technically sound and created good chances and also posed an aerial threat, while Remy was constantly running into space and finding good positions in the box. Giroud’s performance proved the competition for the central striking spot with Benzema could certainly go down to the wire. Griezmann’s substitution for Remy resulted in more intensity going forward as Les Bleus became more fluid and moved the ball more effectively. In the 71st minute, Griezmann, in the team in place of the injured Ribery, sent a curler into the net, thereby scoring his first senior goal for France. Paraguay scoring an equalizer to draw the game proved how important it is for Les Bleus to take their chances and kill a game with the attacking talent they have in abundance.

Deschamps certainly isn’t rushing Benzema, Varane and Ribery back into the side as the ample talent in his squad has provided further options that he would like to explore before the World Cup. France are certainly progressing well in their preparations and there is a certain element of ‘Joie de vivre’ in the squad as the team are working well together and fighting for each other on the pitch. Deschamps has mainly been working with this 23 for the past few weeks and this has been an advantage as the likes of Griezmann, who only has three caps to his name, are well integrated into the side and challenging the more experienced players for their places. The team has regrouped at their training base in Clairefontaine after a few days off to prepare for their final friendly against Jamaica in Lille on Sunday, after which Deschamps will certainly be hoping to have a better idea of his starting XI.