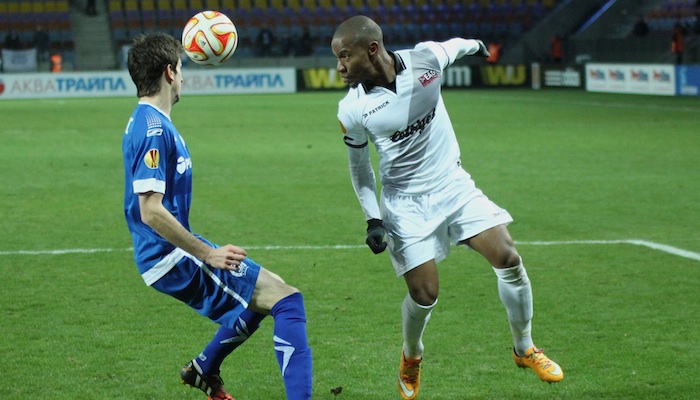 We review all 5 European encounters involving French clubs this week.

PSG’s performance on Tuesday was without doubt below par, but they managed to come away from Cyprus with a vital win, thanks to Cavani’s late goal. PSG had a lot of the ball in the first period, but the best chances fell to Apoel players. Sirigu saved well from Sheridan’s close range shot, and then Sheridan slipped when through on goal after Thiago Silva’s poor touch let him in. Down the other end, Cavani mis-kicked from 6 yards out after a good cross from Lucas.

The second half was more of the same, but the game opened up a little more. Apoel had a few more chances to take the lead, but their best one fell to Thiago Gomes. A cross came in from the left hand side, and Gomes sent a looping header past Sirigu, but David Luiz got back onto the goal line brilliantly to head the ball away to safety. Blanc then made a double change, bringing on Cabaye and Bahebeck, and PSG immediately looked more dangerous going forwards. Just 5 minutes from the end, Cavani produced a scrappy finish into the bottom corner to win the game for the visitors, and proceeded to celebrate with his ‘sniper’ celebration, this time aiming at the ground rather than the stands.

The tone for the finishing in this game was set within the first 5 minutes, when Ocampos missed an absolute sitter to give Monaco the lead. Berbatov squared the ball to him 6 yards out, with the goalkeeper out of his goal, but the winger somehow managed to but the ball over the bar. The dynamic of the whole game would have changed if that had gone in. After a strong start from Monaco, Benfica began to work themselves into the match. Gaitan in particular was very impressive, and his cross to Salvio almost lead to a goal, but the forward blazed his header over the bar.

Once again, Monaco started the second half strongly, with Martial coming close as he sent a shot just wide from the edge of the box. But Benfica were quick to respond with chances of their own. Subasic saved very well form first Gaitan’s low shot, and then Perez’s close range effort to keep the scores level. It was anybody’s game going into the last 15 minutes, but when Benfica’s Lopez was sent off for a second bookable offence, Monaco would have fancied their chances. The closest they came was a late header from Raggi, which was inches wide of creeping in at the back post.

This was a fluid game with some nice passing moves from both sides, but it was also a game of very few clear-cut chances, and neither goalkeeper had an awful lot to to. Divock Origi, on loan from Everton’s rivals Liverpool, got at Everton’s defence early on and was Lille’s standout player in the first period, but faded a little as the game developed. Gueye came closest for either side in the first half, as his shot from just outside the box grazed the left hand post of Tim Howard’s goal.

Lille started strongly in the second half, as Origi turned Besic on the edge of the box and sent a curling shot just over the bar, but Everton were quick to regain a foothold in the match. They created the game’s best chance when Lukaku played in McGeady 1 on 1, but his low shot was saved by Enyeama and cleared to safety by Souare. The game opened up a little in the final few minutes, but neither side was able to find the winning goal.

Minsk, who had lost both of their first two Europa League game before Guingamp’s visit, surprised the French side a little with some slick passing play throughout the match. In the first period in particular, Guingamp often found it hard to keep the ball, and Minsk enjoyed close to 60% possession for large periods. Having said that, neither side could create a telling opportunity in the first half.

The second half soon settled into a pattern. Minsk would try to keep the ball and work their attacks slowly, while Guingamp would look to hit them on the counter. Guingamp soon began to create chances as Minsk tired a little. Sambou Yatabare almost opened the scoring midway into the second half with a low shot towards the corner, but Ignatovich did well to get down low and make the save. The best chance of the match fell to Guingamp in the final few minutes, when Mandanne’s close range shot cannoned back off the post with Ignatovich well beaten. In the end, Guingamp would have to settle with a solid point.

Inter Milan, backed by their impressive home support at the San Siro, started the game well on the front foot, and were perhaps unlucky not to have the lead within 20 minutes. Icardi fired over the bar when he should have hit the target in the 12th minute, and Ruffier then saved well of Guarin’s effort, after the forward had skipped past a few lazy St-Etienne challenges. Then St-Etienne began to grow into the game. First, Theophile-Catherine headed narrowly wide from a corner, and then Tabanou came close with a stunning 35 yard free kick, which was tipped over the bar by Carrizo.

St-Etienne started the second half on the front foot, just as they finished the first, but Inter fought off some pressure and slowly seized back control. They then created the best chance of the match, as Kuzmanovic found space in the area to shoot towards the bottom corner, but Ruffier made a fantastic save down to his left to tip the ball around the post. The final chance of the game again fell to Inter, as Hernanes shot powerfully from distance, but again Ruffier was on hand to keep the ball out. St-Etienne eventually came away with a very good point.