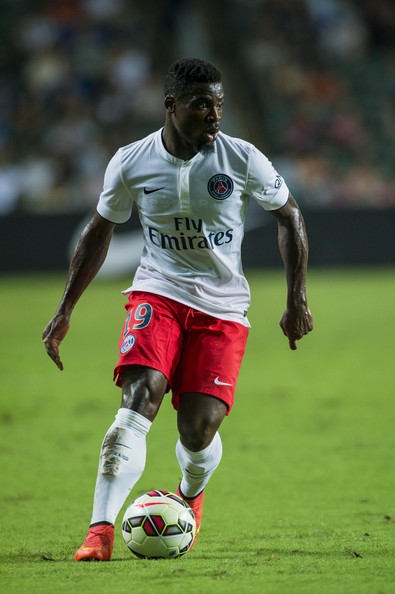 Whilst clubs in other leagues might have been throwing money around here, there and everywhere, France’s Ligue 1 clubs to have tended to follow the strategy of being relatively shrewd with their spending, bar Paris St Germain’s €50 million outlay on David Luiz. Looking back on this summer’s transfer chaos, there has not been any other real big-name signings to speak of but there have been some excellent little manoeuvres made by certain outfits that could improve their team’s performance this season. Here is a quick look at the 5 best transfers made in Ligue 1 during the summer window by Ligue 1 writer Nathan Staples.

Ligue 1’s younger Ayew’s move to Lorient this summer should turn out to be a fantastic piece of business from the Brittany club, bringing in a bright, young forward who should thrive with the regular game time he is likely to receive with Les Merlus, which he wasn’t always afforded at Marseille. After an excellent loan spell last season at relegated Sochaux, many expected him to hit the ground running and, while it took him a couple of fixtures to open his account, he has certainly played his part, scoring his first goal in the 4-0 romp at Guingamp last weekend.

With the departure of last season’s top scorer Vincent Aboubakar to FC Porto and Jeremie Aliadiere joining Qatari side Umm Salal, Jordan Ayew was a vital addition to FCL who needed a new leading front-man. Having beaten off interest from clubs abroad and in Ligue 1 to get the Ghanian international, Ayew has expressed his delight at joining Lorient and this could turn out to be one of the best moves of the summer, so long as the youngster remains focused and patient.

Bordeaux’s appointment of Willy Sagnol as manager over the summer sparked an historically boring side into life, but the former France U21’s coach has not achieved this change of approach all on his own. The unpredictability factor that the surging Wahbi Khazri has brought to the club should serve them well as they fight for continental qualification. He is one of those players that excites the crowd every time he gets hold of the ball and his rapidity and inventive footballing mind have already injected a new lease of life into Bordeaux’s game.

His decision-making can often come under the spotlight and he often has the tendency to be a little too all-guns-blazing but he’s already proving to be an excellent addition, giving Bordeaux an extra option when they get into that final third. At 23, the Tunisian international has time and room for improvement and, under the guidance of Sagnol, the player can be moulded into a complete winger. It is likely that people will look back on this transfer as a wonderful piece of business.

After an excellent season in Ligue 2 with Lens, where his performances earned him the UNFP Goalkeeper of the Year award, Areola will be allowed to showcase his talents in the French top flight this season with Bastia. The 21-year-old Parisian chose not to sit around on the bench behind Salvatore Sirigu at PSG this season after a move to RC Lens was held back due to the club’s transfer embargo, so an agreement to join Claude Makelele’s side should be seen as positive for all three parties involved.

The Corsican club needed a replacement for the retired Mickael Landreau and in  acquiring the services of this athletic, sharp and imposing young goalkeeper for the forthcoming campaign, SCB have undoubtedly completed a shrewd piece of business. He has all the attributes to be a top goalkeeper and having pulled off some excellent saves already for the club, he could be an important player down the line for Bastia this season.

Evian were in desperate need of reinforcements in order to have a realistic chance of avoiding relegation again this season and whilst keeping hold of their talismanic Dane Daniel Wass might be seen as their best move this transfer window, the signing of Yeltsin Tejeda could prove crucial for Les Roses. The Costa Rican international was superb in his nation’s unexpected run to the World Cup quarter-finals, shielding their defence that conceded just twice throughout the entire tournament.

Les Roses need all the quality they can muster after saving themselves on the final day of last season and Tejeda will really add some bite into the midfield that needs to keep opponents at bay on a more regular basis. His rivals in the form of Olivier Sorlin and Djakaridja Koné for that defensive midfield slot are at the best of times mediocre in terms of performance and Tejeda should quickly earn a starting spot for ETG. At just 22, he could have an incredible career ahead of him and it is for this reason that Evian have pulled off a massive coup in signing one of the hottest central American talents out there. No pressure on the youngster, but if his performances at the World Cup are anything to go by, he might be getting admiring glances from bigger sides across Europe.

Whilst PSG’s signing of Chelsea’s polarising defender David Luiz stole all the headlines during the early part of the summer, the club’s move for Toulouse’s Ivorian phenomenon Serge Aurier will likely prove to be the best business that Les Parisiens have done during the summer period. Aurier has been terrific for TFC for the past two seasons as a marauding right-back and he cemented his reputation with some very impressive performances for the Ivory Coast in the World Cup. His versatility furthers his selectability for Blanc and, having taken the armband for Toulouse in the latter part of last season, Aurier is perhaps destined to lead Ligue 1’s capital club one day.

A loan deal with an obligatory buy-out option was agreed so that PSG could side step the wrath of the monster that is Financial Fair Play, but they will be well aware that they’ve acted at exactly the right time to snap up the right-back who was attracting offers from across Europe prior to his move to the Ligue 1 Champions. The battle between Serge Aurier and Gregory van der Wiel for the right-back starting spot this season will be as hotly contested as any, but, if recent form is anything to go by, the momentum is very much with Aurier to establish himself as a first-rate right-back on the continental stage.

PSG and AS Roma in talks for Adrien Rabiot January deal; Verratti to stay