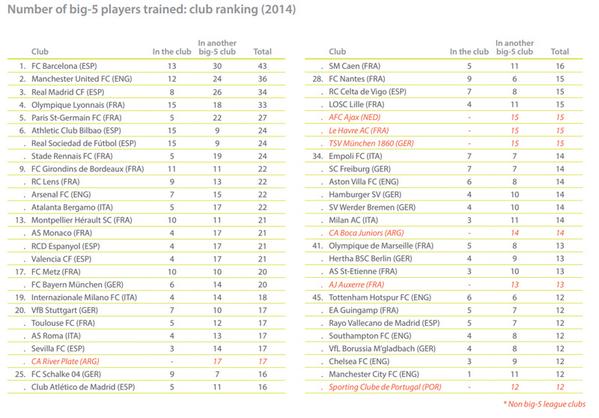 The Homegrown Table of 2014 was released by CIES earlier today, with teams from the French leagues featuring very heavily in the list, showing how top players are being developed at clubs all around the country.

The Table consists of the 52 clubs with the most ‘homegrown’ players playing in one of the ‘big 5’ leagues in Europe. The five leagues counted are: The Premier League, The Bundesliga, Serie A, Ligue 1 and La Liga. The complete list can be seen in the image above.

5 Ligue 1 sides are included in the top 10 teams, with Lyon in 4th the highest rated side in French football. Lyon also rank as the top club in terms of homegrown talent playing in their own team, with 15 such players in Les Gones’ squad this season.

In addition, there are more French teams in the list than any other country. France has 17 representatives in the top 52 sides, more than Spain’s 10, Germany’s 9, England’s 7 and Italy’s 5. It is a very promising sign that France produces so much talent compared to other top countries.

In terms of total players in ‘Big 5’ leagues, French teams once again have produced the most out of any country. Using data from the list, we find that 319 players ‘homegrown’ at French clubs currently play in one of Europe’s top 5 leagues, compared to the 227 players homegrown in Spanish teams in second place.

Adriano will be in Le Havre on Friday