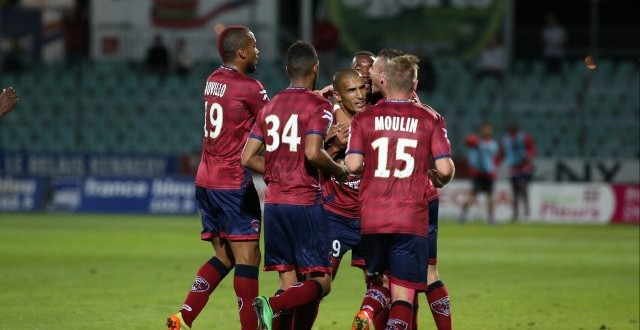 Get French Football News exclusively caught up with the man who scored one of the goals of last weekend with a wonderful acrobatic effort. Clermont’s 22 year old attacker Idriss Saadi talks St Étienne, being managed by a woman in Corinne Diacre and much more.

What did you take forward from your time at St Étienne, especially with regards to your 18 Ligue 1 games?

What I take outmost from St Étienne, was the frenzy of the fans. And then our run in Gambardella Cup. That is what affected me most during my time at St Étienne. After that, I don’t really have any other great memories from my time at St Étienne. The principal qualities of the club is to have fantastic fans and a good youth setup.

Why did you decide to join Clermont?

Because it was the club that wanted to take me on when I decided to move. The manager that was in place at the time had confidence in me, and I wanted to do everything to get game-time. It was an opportunity not to be missed, so I came here.

Was your transfer to Clermont anything to do with the club partnership between St Étienne and Clermont?

Not to my knowledge. My first though was not join Clermont to partake in this partnership. It was not as if St Étienne came to me and said “Here, Clermont are interested” because there was, in quotation marks, a partnership in place at that time. No, it was because I had a good feeling after the dialogue I had with the manager and Clermont’s Sporting Director. So overall, no it had nothing to do with the partnership between the two clubs.

Was it difficult to accept leaving a Ligue 1 team for one in Ligue 2?

Difficult? No. Because I only made a few appearances, and only a few starts for St Étienne. It was not as if I was a professional player with ten years of Ligue 1 behind him, and I was obliged to find a club in Ligue 2 to continue. That was not at all the case. I went to Ligue 2 to rebound, as several other players do, so for me, it was not a difficult decision.

After eight months at the club, tell us a little about how your acclimatisation phase has gone.

When I arrived, the group gave me a superb welcoming. They did it so I was able to integrate quickly, whether it was getting used to their style of play or the style of training. So it happened pretty quickly. On top of that, the Loire region is not different to the one here at all, so it all occurred fairly differently.

I am always working on my weak points, the holes in my game to try and become better.

Your club is currently sitting in 17th position in Ligue 2, what is the club currently missing to get better results?

I think we are missing a mindset of success. We also need to eradicate some of our weaknesses that are, in Ligue 1 or in Ligue 2, unacceptable. We can no longer lose the ball in crucial areas of the pitch, because, at this level we pay dearly for that. That is are problem. We have a good basic game and we have worked hard in pre-season on the physical aspects of our games. We are only missing that breakthrough which will swing our fortunes around. We need to work on certain aspects, but for the moment, we are well on our way.

What explains these deficiencies? Is the group lacking in experience?

No, I think that it is to do with a lack of previous success rather than a lack of experience. For example, we beat GFC Ajaccio 2-0 and rather than kick the ball out we wanted to try and play our way out and they go and get a goal. The opposition takes advantage and confidence and finally, we lose the match. I don’t think this is because we are too young. Maybe we lack focus during matches, maybe we lack maturity but I don’t think raw age comes into it. We have some youngsters who have not played many professional matches, that’s probably where it (the criticism) comes from.

Is it the off-pitch problems that the club had, notably with the Helena Costa affair during pre-season, that explain the difficult start for the team?

Maybe, because our new manager arrived just a week before the start of the Ligue 2 season. After that, I don’t think it is the principle reason, no. Maybe it had a little impact, but it does not concretely explain our inability to get results. It is certain that this situation is not normal, with a manager who is supposed to join and then finally leaves after just two days. Additionally, there is the media hype surrounding it. It had an effect but it is not what caused our results to be less then at the top.

What can you tell us about the coaching style of Corinne Diacre?

It is a very serious management style. She likes to work on the essentials, that the team is organised and tight-knit, that everyone respects their own role on the pitch and overarchingly that the team is not unbalanced. To make sure we are compact and very solid, first and foremost, that is Corinne Diacre’s priority.

How is the group dealing with being managed by a woman?

Tactically, does she bring a little more than your former manager Régis Brouard?

Corinne Diacre is more rigorous defensively. She asks for an enormous amount of work from our defenders for everything that concerns setting up defensively. It is one of the only differences, because our tactical system remains broadly the same. At the same time, she is of course a former defender!

You are under contract until 2017, what do you see happening for you in the coming seasons?

I am not really looking to the future at the moment. I always like to concentrate on the next game and then take a rain-check once the season is over. I will take the years as they come. I’m not here to calculate, “in 3 years, where will I be?” No, that isn’t me. I have aims each game, I have short-term objectives. I do not want to make long term plans because football is not rational. We cannot say, “if I am here, there will be this happening…”. We all know that we have to perform as well as possible in order to be noticed, but apart from that, there is no certainty in football.

What are your personal objectives for the forthcoming season?

To bring as much to the team as possible. Whether that is by scoring goals, or tracking back defensively. I must be as effective as possible.

You have scored 11 goals in 24 matches with Clermont (at the time of the interview). What do you think of your performances?

I think that I can do even better. I am happy to have been able to score these goals because they were important, but the next ones will also be important. It is a good start, but I must continue to work in order to hope to score more this season.

You have already played in Ligue 1. With the statistics you are boasting at the moment, are you not in an hurry to rejoin the elite?

It is certain that every player wants to play in Ligue 1 and wants to make a career for themselves at the top level. Besides that, I am not in a hurry, no. I don’t like to rush stages. I don’t like going too quickly. Things will happen in their own time. For the moment, my aim is to score as many goals as possible. When the opportunity presents itself if it ever presents itself, I will think about it.

So were there Ligue 1 clubs in talks with your agent this summer then?

Personally, I am not at all preoccupied by that because my aim was to stay at Clermont. Even if there had been Ligue 1 clubs, I don’t think that I would have left. My aim was not to join a Ligue 1 club at all costs just to be the third of fourth choice attacker. My aim is to have a great season and to belong to a club that really counts on me as a consistent starter and to play with competition. Otherwise, there would have been not point to go to Ligue 1 if I wasn’t going to play. I am young, I have a lot still to prove. My aim was to stay at Clermont before imagining a possible departure.

Finally, everybody saw your fantastic goal against Le Havre last week. Can you take us through the wonderful strike again?

The corner came in from the left hand side. The ball is diverted at the front post by Hugo Vidémont and a second time immediately behind him by a Le Havre defender. At the beginning, it looked like I was going to be lobed because I wanted to cut the trajectory. So, I stopped and the ball floated over me at the ideal height. I didn’t hesitate, I make an acrobatic turn and it goes in… It is good for the team.