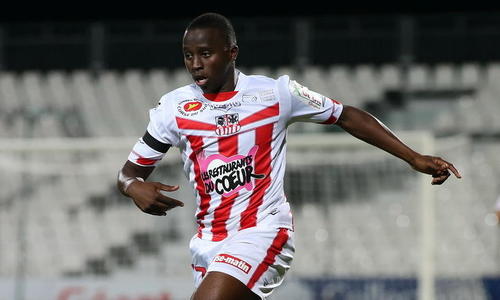 Get French Football News spoke to midfielder Sigamary Diarra in his first interview as a new Valenciennes player.

What do you take forward with you from your time at Ajaccio?

On a team level, a take with me seven very good month with a good quality of football. Those were when times were good. It was very interesting in terms of the quality of the players and in the way we enjoyed ourselves but after that, what I take with me unfortunately, is a difficult period, last season, in which we didn’t win much and often found ourselves in difficult situations.

Why did you decide not to continue with the Corsican side?

I felt as if I had reached the end of a cycle. It was two years that I was at Ajaccio and I had come to the end of my contract. I had to leave and they also wanted to change players.

This summer, you haven’t found a new club until the end of August, even though Ligue 2 is now well underway. Was this a long wait for you?

No if signing for a Ligue 2 club had been a priority I could have done it at the very end of last season, in May. Initially, my aim was to play abroad or in Ligue 1. For that reason, I wanted to wait until the end of the window to have more of a chance of doing so. At the beginning, I had no intention of playing in Ligue 2, I always thought I could aim higher and the decision to leave it until the end gave me time to think properly, but also to be sure that I didn’t miss out on anything. I am happy to be here.

Why did you choose Valenciennes over the other interested clubs?

I thought their overall project and my ambitions matched each other. For me, Valenciennes, compared to the other outfits, from the stadium to the heart of the club, is one of the best teams in Ligue 2, who can launch themselves into Ligue 1. Their current squad convinced me that this season could be interesting. They have a good team, lots of potential.

You have signed a one year deal with an option to extend by a year, tell us a bit more about this option.

Avoiding relegation or being promoted will trigger that option.

The club is currently 20th after 4 games. What do you think you will bring to the team?

I hope to bring hunger, but I think they already have that! At the moment, they don’t necessarily need me. Simply put, they need to reach a certain physical level. Now, we will start to reach that and things should be fine. They had a bit of an odd pre-season considering all the administrative troubles (DNCG). I think the early results are primarily due to that, not because they didn’t have Sigamary Diarra…

Have you already go to know your teammates? What are your first impressions?

Yes I trained with them this morning (25th August). I had good impressions. They are players that I have often come up against in the past. Integration will happen automatically.

What were the first words of Mr Casoni (manager) to you?

I had him at first on the phone. He explained his interest in me, that he wanted to have me in his team.

On an international level, is the African Cup of Nations 2015 a goal for you?

I am always ready for international games. My aim at the moment, is to play well every time I get the chance to. I am not looking further forward than that. If I am good when I play, I know that I will be picked to go to the African Cup of Nations. My aim, is always the next game.