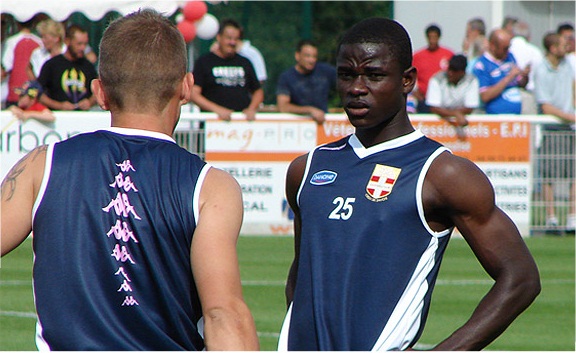 James Martland caught up with Evian centre back Jonathan Mensah to discuss all things Evian, Ghana and what the future holds for this talented Ghanian international. The player is enjoying a good season with Evian so far and is hoping to represent his country in the upcoming World Cup.

After a few impressive seasons in South Africa, how hard a decision was it to move to Europe with Italian side Udinese?

Obviously it’s always difficult moving countries as a young man but I was determined to make my mark in European football so i took it in my stride.

Were you disappointed that your career with the Italian side never really got going?

Not really. As a footballer you want to be where you’re loved and appreciated and I had a great time at Granada. I don’t like looking back.

It has taken a while for you to settle in at Evian, but is it fair to say you are now hitting your stride in the first team?

Yes a little longer than I planned but things don’t always go to plan in football. I feel comfortable now and its showing through my performances on the pitch.

You scored a wonder-goal against Stade de Reims earlier this season. Have you ever hit a sweater shot?

It was perfect. Centre backs don’t always get the opportunity to get strikes on goal but this was just right and I gave it the finish it deserved.

You have played at centre-back and right-back this season. Would you like to nail down one position by the end of the season?

I am a centre back by trade and everyone is aware of this. Sometimes the coach has to make adjustments and as a player you have to be flexible. I am comfortable.

Injuries have been a constant issue for you recently, especially with your thigh. Does this just make you more determined to succeed?

Injuries are part of the game. Some are luckier than others with it but I am healthy and played a great part to the team this season. My determination is as high as it’s ever been.

What are your aspirations for Ghana in the upcoming World Cup?

We have to go with the mentality to better our quarter final finish in 2010. We have to carefully negotiate making it out of a tough group and then anything can happen.

I believe in my ability. I was the youngest member of the Ghana squad in South Africa and an even better player now. My concentration now is on helping my club then the rest will look after itself.

How important is Andre Ayew for the Ghana national team?

He is a great player and shows that every time he wears the shirt of Ghana. Like all the players everyone plays an important part in the team.

How important are your team-mates to you at Evian?

They’re important because football is a team game. The spirit in the changing room is very positive and we’re all enjoying our football right now.

Tell us something embarrassing about one of them?

I think for a small guy (Youssouf) Sabaly takes too long in the shower. The time he spends on his bald head is too funny.

Who do you look up to in the modern game?

As a defender I try to model my game on Vidic.  I love his no nonsense style and to play at a top club like Man Utd for so long is testament to his abilities.

Who has been the biggest influence on your career so far?

My first coach at Ashanti Gold and Free State Stars coach Duncan. I think i owe my career to him for the faith he showed me from a very young age.

Who is the best player you have played against in your career?

It has to be Mezut Ozil. He is a gifted player.

We are in a transfer window where anything can happen. Has any club shown interest in you in the last few months?

There has been interest but my main aim is to help Evian secure a good position in the League and just enjoy my football.

What do wish to achieve in the long term future? At the age of 23, you have many years ahead of you in football

The Premier League or La Liga. Which is better?

They’re are both important championships and I have had the pleasure of playing in Spain. It would be a dream to play in the Premier League.