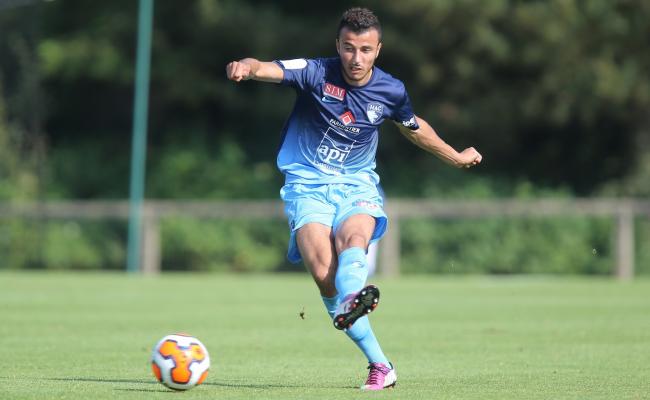 Alongside freelance journalist Antoine Komprobst, Get French Football News brings you an exclusive interview with Le Havre’s Romain Saïss. Speaking via telephone, the midfielder tackled a range of topics and gave his verdict on a promising first season at his new club.

What made you decide upon a move to Le Havre despite interest from Ligue 1 clubs?

Le Havre were one of the first clubs to get in touch with my agents and [management advisor] Christophe Revault, the club’s sporting director and the coach all let me know how keen they were on having me join the club. When they outlined the project they were looking to implement here, that swayed it for me. I didn’t want to leave [Clermont] just for the sake of it, I wanted regular playing time and decided that one more year playing for a Ligue 2 side with such a good project in place could only be a good thing for me. Ultimately, it came down to playing time: Le Havre gave me more guarantees than the other Ligue 1 clubs. I wanted one more year [in Ligue 2] before making the step up and made a purely sporting decision. Ultimately, with just three seasons of experience in the professional game, I’m still finding my feet and I need to be playing regularly to progress.

How would you rate your first season at Le Havre?

I’m fairly satisfied with my first season as I’ve played in practically every match – the only games I’ve missed have been due to injury or suspension. Personally, I’m happy with my performances too and I feel that I’ve progressed over the course of the campaign. Being deployed in midfield has really helped, as has the fact that we play as a team here. Overall, looking back over the season, I’d say I made the right choice in signing for Le Havre.

Would you say the move has offered you something that you didn’t have at Clermont?

Definitely, while Le Havre are in the same division as Clermont, the club has a completely different standing. The infrastructure is completely different to what was on offer at Clermont and that makes a big difference. Here, for example, we have a great stadium and a dedicated training centre – two aspects that are certainly better than they were at Clermont. Also, the new playing style they’re trying to implement here really suits me and has helped me progress as it fits well with my strengths. I’m really happy to be here but I also learned a lot during my two seasons at Clermont. It was there that I first got to experience the professional game and, over the course of the two seasons, I was involved in a fight for promotion and a relegation scrap. I owe a lot to the club for where I am today and I’ll always be grateful for the opportunities they gave me.

I have a good relationship with the coach and we often go over things like my performance or my positioning after matches. He’s very close to all the players and likes to get the best out of everybody. That’s why he holds these post-match debriefings with every player as it provides a good opportunity to go through the positives and the negatives. He likes to hear everyone’s opinion. I think it’s important for the players to feel this kind of trust from the coach as it allows us to progress together, all pulling in the same direction.

How do you see the last few weeks of the season going?

While we still need a few points to guarantee our safety, we can afford to finish the season in a fairly relaxed manner as we’re pretty much already there and there’s little else to play for. That said, it’s important that we take pride in our performances and retain a high level of professionalism as other teams are still fighting for promotion or survival. We need to stay focused and try to get as many points as we can to secure the best finish possible. It would certainly be nice to finish in the top half.

You have another year left on your contract. Do you plan on staying at Le Havre?

I haven’t really thought about it, we’re all just fighting to stay in the league at the minute. Once safety is guaranteed, we’ll see what happens. If any attractive offers come in from Ligue 1 or from abroad, I’ll have to give them serious thought this year. For now I’m focusing on finishing the season strongly but in any case, whatever happens, it’s not solely down to me: I’ve got to be happy, yes, but so does the club. I still have a year left on my contract and I feel at home here, I’ll discuss it with the coach and the bosses at the end of the season.

Have you already had any offers?

I leave that side of things to my agents. We’ll see what happens at the end of the season. My performances will have a huge part to play in any move so I’ll do my best to finish the season strongly. Then we’ll see if there are any offers – I trust my agents to sort it out.

And what about your future with Morocco?

Well, the African Cup of Nations isn’t far off and I’m going to do everything I can to be involved. It’s down to me to show what I’m capable of on the pitch and that I deserve a call-up. I’m really going to give my all to be involved in this tournament as I don’t want to look back on it with regret. I also realise that, while I’m in Ligue 2, many of the other players are in Ligue 1 or abroad and they’re ahead of me at the moment. Anyway, that’s what I’m working for, any decisions on my future will definitely be taken with a view to being called up for the national team.