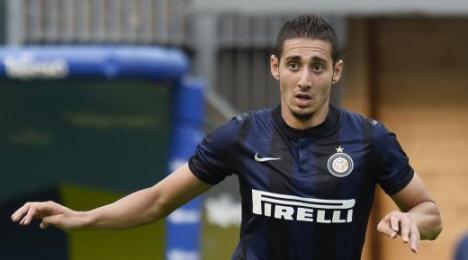 Amid conflicting reports in England, France and Italy, we try and outline to you what is actually going on with Inter Milan’s Ishak Belfodil.

The Ex-French youth international’s club Inter Milan are happy for the player to go on loan and it is a move which should suit both parties. The player has received limited playing time for Inter Milan this season as well as last and has expressed a desire to get game time ahead of the world cup in Rio this coming summer, where he hopes to represent Algeria.

We can confirm Sky Italy reports from earlier today that West Ham and Inter Milan met this morning over a possible loan deal after pictures emerged of Belfodil’s agent and Inter Milan representatives. L’Equipe have gone as far as saying that an agreement has been reached between the two clubs and it is now over to the player. Tuttomercato say that it is a loan deal with a view to a permanent at the end of the season.

The deal does however look very far from done, as despite claims that there is an agreement, the ever reliable RMC has told us that the player is very much against a move to the Hammers currently and is refusing to be drawn into anything. We shall have to wait and see if his mind can be changed.

A deal is not off the cards therefore, it just appears that the player needs to make a decision. France Football are claiming that the reluctance from Belfodil is because he is also weighing up QPR as an option, who have also shown concrete interest in him. RMC now say that the player is in contract discussions with West Ham.