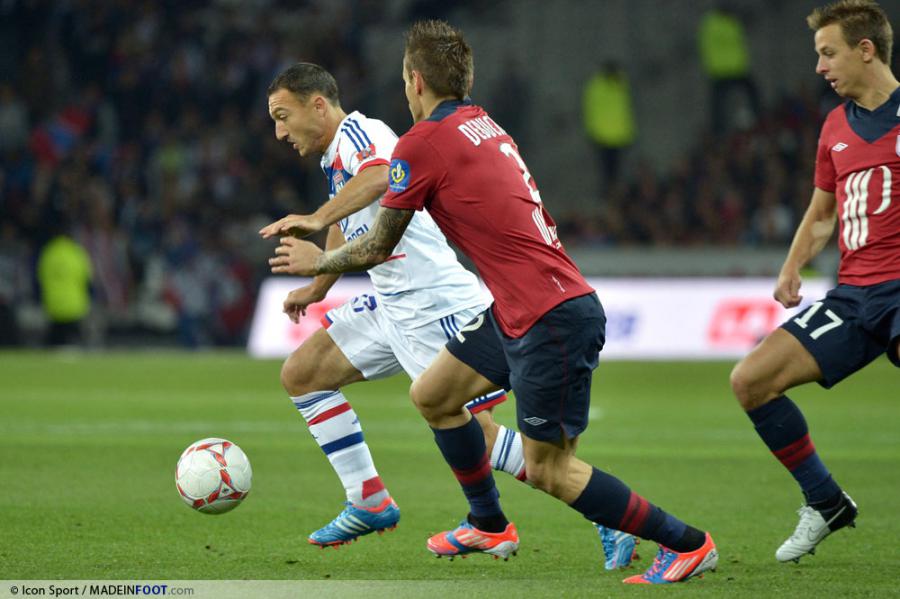 22:00: FULL TIME: Lille 0-0 Lyon. So a draw it is then, which is not the end of the world for either side. Lille move above St-Etienne into 3rd place, while Lyon are still in 5th, 5 points behind today’s opponents.

21:55: Close: Souaré produces a brilliant sliding block to deny Lyon a certain winner at the death, and from that attack Rodelin puts the ball in the back of the net for Lille, only for the linesman to raise his flag for offside! Correct decision as well, despite Lille’s protests.

21:53: Close: Gomis makes a great break down the centre, and plays the ball across to Lacazette, but Enyeama is quick off his line and gets to the ball before the striker to clear the danger.

21:49: We are into the last few minutes of added time here, and it looks like we will have a draw here today. The result probably suits Lille, who will move up into 3rd place, more than Lyon, but it is not decisive for either team.

21:45: Gonalons is now down and in trouble as he is hit by Souaré’s knee, and he is subbed off after a period on the floor. That really sums up his night I’m afraid.

21:42: Close: Gonalons, who has had one of the worst games I have seen of him in a Lyon shirt, gives the ball away once again, presenting Lille with a good chance to score, but they waste it once again as Mavuba fires wide from outside the box.

21:39: Close: And now it is Lyon who should be in front! Lacazette finds himself through on goal with just Enyeama to beat, but is low shot is straight at Lille’s goalkeeper, and is eventually cleared to safety by the home side.

21:37: Close: Origi almost scores a brilliant goal! His shot from distance is tipped onto the bar by a flying Lopes, but a goal kick is given…

21:34: Close: Grenier’s corner is not cleared convincingly, and Koné should really score from 6 yards out, but his tame shot is straight at Enyeama in the Lille goal.

21:30: Substitution: Roux is off as Mendes comes on. Strange substitution in some ways, Roux had looked Lille’s most dangerous player.

21:26: Close: Lyon’s best chance of the match! Grenier is played through on goal, and he manages to dink the ball over the onrushing Enyeama, but Souaré manages to clear the ball off the line with a brilliant header!

21:23: Close: Lille go close twice! First, Origi hits a shot that is destined for the far corner, until Lopes’ foot comes to the rescue for Lyon, and then the goalkeeper saves Lyon again as he tips a low cross away from Roux, who would have finished into an open goal. Things are heating up…

21:20: Lacazette touches the ball for what feels like the first time all match, and he is caught by Sidibé. However, the free kick from Lyon is too close to Enyeama and he collets easily. Sidibé really needs to be careful, he is on a yellow and could well have been off already…

21:17: Penalty Appeal: Guess what? Another appeal for a penalty… This time Roux again goes down under a challenge, but there is no contact at all and really that should have been a booking for a dive.

21:14: Close: A corner now for Lille, who have regained control of the game… and it is cleared off the line! Rozehnal heads the ball towards the corner, but it is headed off the line by Ferri! Closest we have come to a goal so far.

21:11: Lille now have a free kick in a brilliant position after Gonalons gives away yet another foul… but it is wasted as the ball flies harmlessly over the bar. Both sides have lacked conviction in the final third.

21:08: Quick start from Lyon, as Lopes bombs down the right and crosses for Gomis, who is narrowly offside. Both teams were too narrow in the first half, so the managers may have asked their full backs to push up more at the break.

21:06: KICK OFF: We are back underway at Lille! Who can take the all important 3 points?

20:58: Well, we’ve definitely had a lack of clear cut chances so far, but with both sides looking for the win in the second half that should (fingers crossed) all change. Big second 45 coming up for both sides here.

20:48: Gomis, who is on a yellow, fouls Rozehnal and gives Lille a free kick in a dangerous position… but Fofana clears convincingly and the danger is over. That should be that for the first half.

20:45: Penalty Appeal: Yet another appeal from Lille, and yet another rejection from the referee. This time, Lopes dives in and gets none of the ball just on the edge of the area, which looked a clear foul, but the referee is once again unmoved.

20:43: Sidibé is booked for what can only be described as a rugby tackle on Lyon’s Ferri as Lyon looked to break. Cynical from the Lille full back to say the least.

20:41: Penalty Appeal: This time Lyon are up in arms as Gomis thinks he is brought down by Kjaer in the box, but the referee is not interested. Looks like a good decision, a penalty there would have been extremely harsh.

20:38: A succession of corners for Lyon, but once again both set pieces come to nothing. It may be because Lille have left 2 up front, meaning Lyon have to leave 3 back to defend them and have less players in the box. Interesting tactics there from the home side.

20:35: Penalty Appeal: Lille are furious, and perhaps rightly so… Umtiti appears to handle the ball inside the box, which would be a clear penalty, but Roux is adjudged to have fouled the Lyon defender. Harsh on Roux to say the least, Umtiti has got away with one there I think.

20:32: Lille definitely the better team at the moment. Gomis and Lacazette have hardly touched the ball up top for Lyon, which will please Lille fans.

20:29: Close: First real chance of the game so far! Gonalons slips in midfield, allowing Roux to have a good sight on goal. Gonalons then tries to pull him down, but cannot quite do it, and Roux goes for a long range shot on goal. Unfortunately for Lille, it flies just wide of Lopes’ goal.

20:25: First corner for Lyon… but Grenier’s delivery cannot find a team mate and Lille can clear comfortably. Yet to be a major opening for either side, and this game may well be decided by just the one goal.

20:22: Lille pressing high up the pitch now. Gomis gets the ball well inside his own half, and Kjaer is right on his back straight away, pushing to win the ball back. Fortunately for Gomis, he is awarded a free kick. Much better from Lille.

20:18: Lille beginning to get into the game a little more in the last few minutes. A couple of corners do come to nothing, but they are beginning to match Lyon in midfield, and look like they have settled after a tough start.

20:15: Ouch!: It’s poor old Bedimo again! This time, Kalou flies in with a slide tackle and takes out the left back, who looks like he may have twisted his ankle in the process. Hopefully he is OK to continue.

20:13: Ouch!: Nasty there for Bedimo. Origi leaves a flailing elbow out as he and Bedimo go up for a header, and catches the Lyon full back flush in the face. No card given, but a lot of blood. Safe to say Bedimo is not best pleased with that one…

20:11: Lyon definitely the better side at the moment. Both Lopes and Bedimo are playing like wingers on their respective sides, which highlights how little of the ball Lille have had so far. Lille need to start making some tackles in midfield and make it harder for Lyon to keep the ball.

20:08: Bedimo manages to make a foul throw when Lyon were in a good position, something that we hardly ever see professionals do… Let’s hope that doesn’t set the tone for the quality of the rest of the match!

20:05: As we may have expected, its been a tentative start to the match by both sides. Lille are a team devoid of confidence at the moment, and they face an extremely dangerous opponent in Lyon today. The away side have started the brighter of the two, but nothing concrete this early on.

19:58: Today’s match is a huge game for both teams involved. Lille, who looked to be pushing PSG and Monaco for the top spot earlier in the season, have been in poor form since winter and Lyon, who had started so poorly, could climb to within 2 points of 3rd with a victory today. This could be season-defining.

19:50: Welcome one and all to another live commentary of some Sunday evening Ligue 1 action. We have a potential cracker lined up today, as Lille, who looked in such good form just before the winter break, take on Lyon, who have had a disappointing season by their high standards. Which side will come away with the vital 3 points, we will have to see, but before then, let’s get into the team news!