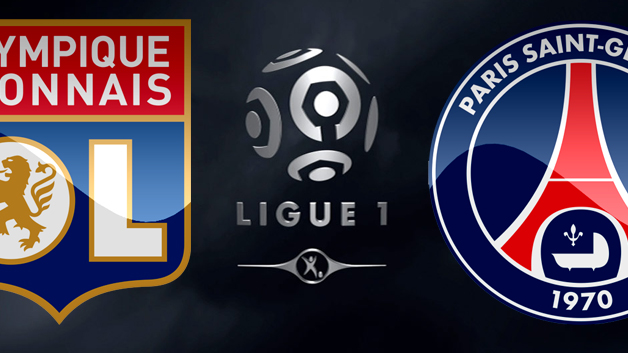 22:00: Round Up: What a brilliant result that is for Lyon, who were in inspired form today. PSG just could not break them down, and does that give Lyon an advantage heading into Saturday’s Cup Final? It may well do you know. Anyhow, after another exciting Ligue 1 encounter, it is time for me to say goodbye. Until next time, Au Revoir!

21:52: Lyon defending with their lives here. As soon as they get the ball, they blast it as far away as they can from their goal. Just 2 minutes of added time now…

21:50: Ouch: Cavani hits a strong shot right into Umtiti’s face, but the ball goes out for a corner… which Lyon eventually clear. Time running out for PSG.

21:47: PSG really pressing now. This time Menez fires a dangerous ball across the face of goal, but there is nobody there to tuck it home. They have lacked the cutting edge today.

21:45: Close: Lopes again! This time, Pastore is released on the left, but his shot is saved by a diving Anthony Lopes. Brilliant from the Lyon goalkeeper, who has kept his team ahead.

21:42: Foul on Cavani by Lyon captain Gonalons. I reckon this is within Lucas Moura’s shooting range… but he crosses it, and PSG really should have scored as the cross evaded both Silva and Cavani at the back post! Another chance goes begging…

21:40: Substitutions: Menez and Rabiot come on for Alex and Lavezzi in the last throw of the die from manager Laurent Blanc. Will it pay off?

21:37: Close: Pastore’s header from a corner is cleared off the line by Mvuemba! Then, Lyon have 3 vs 3 on the break, but Briand is wasteful, as his cross goes out harmlessly for a goal kick.

21:35: PSG now win a free kick in front of their fans, and it is a decent chance to cross for Lavezzi… who delivers a good ball deep into the area, but Lopes punches clear with Motta looming at the back post.

21:33: Close: PSG now almost find the equaliser! Thiago Motta sends in a stunning long range ball over the Lyon defence, and Lavezzi meets it, but his volley is into the side netting when he really should have hit the target at least.

21:30: Close: Almost another stunning goal! Ferri picks the ball up, and as it bounces in front of him, he hits a dipping volley towards Sirigu’s goal, who is forced into a diving save to deny Ferri a second. Lyon pushing for the second.

21:27: Close: Lyon almost put it to bed! A cross from the right is met by Briand at the near post, but his flicked header flies just wide of Sirigu’s post. Great chance for Lyon to extend their lead and land a sucker punch, but PSG live on.

21:24: PSG are really pressing now, committing lots of bodies forward with each attack. Lyon, though, are set up to hit them on the break, and they almost do just that, with a 3-on-2 after a PSG attack breaks down, but Briand is offside.

21:20: How has Cavani not scored? He is given offside eventually, but he was right in front of goal with the goal gaping, and he slashed it horribly wide. Looks devoid of confidence.

21:14: Umtiti is called into action immediately, as Van der Wiel’s low cross looks to have picked out Cavani in the box, but a sliding Umtiti denies the Uruguayan again. Very good defending there.

21:11: Substitution: Samuel Umtiti is on for the injured Kone, who looks like he has done his groin. Umtiti a more than adequate replacement though, so Lyon will not be overly concerned.

21:08: The next goal is really crucial here. If Lyon get it, they can really knock the sails out of PSG’s winds, but if PSG equalise, their recent Ligue 1 domination may return. Whoever scores next is likely to go on and win.

20:57: Round Up: Lyon are full value for the lead at the moment in my opinion. PSG looks short of a plan B, and they need to find something, without star striker Ibra, to turn this around. Can the Champions do it?

20:49: Close: Cavani feeds Cabaye, who flicks it up and hits it on the volley, but is flashes narrowly wide of Lopes’s right hand post. Good effort from the Frenchman, but PSG will have to do a bit better to get that equaliser.

20:47: Cynical stuff from Lavezzi, who knows exactly what he is doing as he leaves out a leg to trip up a Lyon player, but he escapes punishment from the referee. That was a yellow in my book.

20:44: Close: Pastore ghosts round two Lyon players with some beautiful skill, and feeds the ball to Cavani, but the Uruguayan can only cut inside and shoot straight at a grateful Lopes. Should have done better there.

20:42: PSG have now won a free kick, and Lavezzi will deliver it… but it is not deep enough and Lyon clear with relative ease. Coming up to half time now.

20:40: Lyon have slowed the tempo of the game here a little, giving away some small fouls to stop PSG building up a head of steam. That Lyon goal is the first PSG have conceded in 7 games.

20:37: Good response from PSG, as Matuidi’s clever back heel finds an onrushing Digne, but his low cross is cleared by Kone before Cavani could get on the end of it. Lyon deservedly lead.

20:34: GOAL: Lyon 1-0 PSG (Ferri). Absolutely brilliant! Lavezzi loses the ball cheaply, and Ferri picks it up outside the box. He then unleashes a brilliant strike past Sirigu, who could do nothing about it. Great goal there from Ferri, who only seems to score stunners!

20:30: Pastore has been seeing a lot of the ball recently, and he tries a chipped pass into Cavani with his latest possession, but the Lyon defenders are alert to the danger and clear the danger.

20:27: PSG win a free kick in a good position… will they shoot or cross it in? Cabaye decides to have a shot at goal, but it is blocked by the Lyon wall. PSG coming back into the game now after that early Lyon pressure.

20:25: Sirigu and Thiago Silva get in a complete tangle when trying to clear a ball, and Sirigu ends up hurting his captain with his attempted clearance. Luckily for PSG, the ball is cleared eventually, and Thiago Silva looks in good shape.

20:23: Lyon have made the better start, but remember that PSG have had two more days to recover from this match than Lyon have, who played on Thursday. If PSG keep the score level going into half time, you have to fancy the Champions really.

20:20: PSG are having more of the ball, but Lyon are having all the chances at the moment. This time, it takes a very good Motta tackle to prevent Gomis having a shot at goal. Good start from Lyon.

20:17: Close: Gomis is up for this game! He turns brilliantly on the ball, fooling a PSG defender, and hits a powerful shot at goal with his left foot, but Sirigu is equal to it and punches it away. Great game so far.

20:15: Close: Gomis almost scores! He gets the ball in the penalty area, twists and turns, holding off defenders, and lashes a shot just wide of Sirigu’s goal. Lots of action here.

20:13: Close: Bizarre scenes here! Cavani goes down under a Lopes challenge, referee says advantage, Digne taps in, but is then given offside. PSG want the penalty, but the referee is having none of it! Still 0-0 somehow.

20:10: Pastore finds space on the right hand side, but his cross is cut out at the near post, and when the ball drops back to him, a wild slash goes out for a throw in. PSG exerting their influence in the early stages.

20:09: Close: Now Lyon go up the other end! Gomis hits a bouncing shot towards goal, and it is heading into the bottom corner, but Sirigu gets down low well to push it away to safety. Good saves from both goalkeepers.

20:07: Close: PSG almost take the lead! Van der Wiel finds space down the right after Blaise Matuidi’s through ball, and his cross is met at the near post by Edison Cavani, but his powerful header is saved brilliantly by Anthony Lopes. Stunning save.

20:05: Remember, these two teams will meet again in a Cup Final in just 6 days time, so this game is as much about getting used to their opposition and finding ways to break them down as it is to get the three points.

20:03: KICK OFF: We are underway in Lyon! Who will take the three points today?

19:58: The players have emerged from the tunnels, and kick off is now imminent in Lyon. Regardless of perhaps little hinging on this match, Lyon vs PSG is always huge, and both teams will be pumped up going into the game. Here we go…

19:54: European Blues: Both Lyon and PSG had disappointing nights on the European stage in midweek. On Tuesday, PSG failed to capitalise on a 3-1 advantage from the first leg against Chelsea, losing 2-0 at Stamford Bridge and going out on away goal. Lyon, on the other hand, but in a highly credible display against Italian giants Juventus, but were still defeated 2-1 in Turin, and 3-1 on aggregate. Both teams will be looking to respond today.

19:45: Welcome one and all to yet another Live Commentary of some Ligue 1 action, and we have another huge match coming up in a few minutes. Yes, Europe-chasing Lyon take on runaway leaders PSG, who can all but confirm their retention of the Ligue 1 title with a win today. Let’s hop straight into some team news…