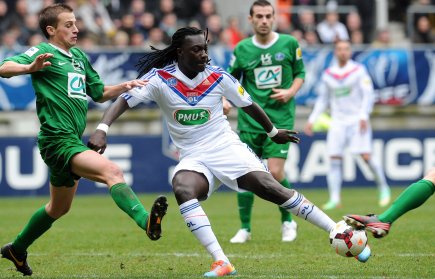 21:00: So, after the mist clears on that huge derby, St-Etienne will walk away with a vital three points against an opponent they seem to beat so rarely. That win, just their 2nd in 30 matches against Lyon, lifts them 6 points above their rivals, and means that their hopes of a 3rd place finish and Champions League football are still alive. After a very entertaining derby, it is time for me to say goodbye. Until next time, Au Revoir!

20:52: Lyon are just pumping the ball into the St-Etienne box as soon as they get it, and we have just 2 minutes of stoppage time for them to find an equaliser. They have a corner… but it is a real waste, straight into the hands of Ruffier. ASSE on the verge.

20:50: Close: How have St-Etienne not put this to bed?! Brandao finds pace on the left, with just one Lyon defender in sight, and he has two team mates in the box completely unmarked, but his cross goes between the two of them and out of danger.

20:48: Lyon huffing and puffing, but creating very little at the moment. Their latest chance goes begging as Bedimo fires a 25 yard shot well wide of the post.

20:46: Close: A ball is drifted over the top of the St-Etienne defence towards Gomis, but his acrobatic bicycle kick flies a few feet over the bar. May have been better advised to try something less spectacular there.

20:44: Lyon win their 4th corner in as many minutes… but again St-Etienne clear as Brandao heads away at the near post. Lyon really beginning to press, but ASSE could hit them on the counter.

20:42: Close: Lyon almost level! The ball falls to Briand from a Gomis cross, but St-Etienne captain Loic Perrin absolutely throws himself at the ball to block the goal bound shot and protect his team’s lead. Brilliant play from the big centre back.

20:39: Substitution: Danic comes on for Malbranque as Lyon’s second change. The home side desperately need a goal.

20:37: Lyon have responded well so far to going behind, as Briand looks to get in behind the St-Etienne defence, but the through ball is just too strong for him and St-Etienne can clear.

20:34: GOAL: Lyon 1-2 St-Etienne (Gradel). Oh dear, taxi for Lopes! A cross comes in from the right, and it should be a routine low take for the goalkeeper, but instead he palms it right out into the oncoming Gradel, who finishes into an empty net first time. Lyon have it all to do now.

20:31: Perhaps this is what the derby needed! A late challenge by Brandao once again kick starts a confrontation between the Lyon and St-Etienne teams, and eventually Brandao is booked for his tackle. That should get the blood pumping.

20:28: As we near the latter parts of this game, substitutions are likely to make a big difference. St-Etienne’s bench looks the stronger one, with the likes of Mollo, Tabanou and Gradel. In fact, in a little bit of a surprise move, goalscorer Erding comes off for the aforementioned Gradel in St-Etienne’s first change.

20:25: Penalty Appeal: Bayal Sall looks to handle the ball in the area, and the Lyon players and fans are all demanding a penalty, but Buquet waives it away and gives nothing. The replays show that it really was a penalty I think, St-Etienne very lucky to get away with that one.

20:22: Neither side has really taken the initiative so far in this second half. I guess he onus is on Lyon, being the home side, to go for the win here, especially as it would put them level on points with today’s bitter rivals.

20:18: Henri Bedimo has had a lively last two minutes. First, he goes on a mazy run that beats 2 or 3 St-Etienne defenders, then he tries a long range shot from 30 yards, which was rifling in on goal until Kurt Zouma blocked it and deflected it out for a corner.

20:16: St-Etienne break on Lyon and have plenty of numbers up front, but Tremoulinas’ cross cannot find a team mate and Lyon clear.

20:14: Gomis really looks up for this today. He spins and twists against Perrin and absolutely fools the St-Etienne defender, but his attempted cross is eventually cut out. Lively start to the second half from both sides.

20:12: Close: First moment of danger in the second half. Malbranque slips in a ball behind Bayal Sall, with Gomis looking to pounce, but Ruffier is out sharply to stop Gomis from being through on goal.

20:09: The second half starts like the first, with St-Etienne passing the ball around the back four calmly. I presume this is a tactic from St-Etienne to quiet the home crowd by keeping the ball as long as possible.

20:06: KICK OFF: We are back underway in Lyon! Who can push on and get the three points? Half time substitution as well, as Briand comes on for the injured Gourcuff.

20:58: The second half is really nicely poised after that opening 45. St-Etienne really looked like they would go into the break in front, but a move of real class by Lyon unlocked their defence and gave Lyon a path back into the game. Fascinating derby so fa,r second half on the way…

20:50: HALF TIME: Lyon 1-1 St-Etienne. Great first half! Erding opened the scoring, Lacazette responded for Lyon. We are level at the break.

20:47: Two minutes of added time to go now until half time. Mvuema goes into the book for a cynical foul, a definite yellow, and I have to say the referee has controlled this passionate derby very well so far.

20:44: GOAL: Lyon 1-1 St-Etienne (Lacazette). Brilliant. Simply brilliant! Gomis takes on two men out on the wing, then floats a beautiful ball into Lacazette out on the left, who’s first time volley is perfectly placed past Ruffier in the St-Etienne goal.

20:40: Close: St-Etienne almost have a second! Lopes, who was so assured earlier in the game, is in no man’s land when a cross comes in, and as the ball is pulled back for Erding the goal is unprotected, but luckily for Lyon Erding’s shot is blocked and goes out for a corner.

20:38: It appears Lyon’s response is to get, to put it nicely, physical with their St-Etienne counterparts. Following Lopes’ clash with Edring, Lyon give away a series of fouls as they chop down advancing St-Etienne players.

20:35: So, how will Lyon respond to going a goal down? At the moment, St-Etienne are still dominating the ball, and Lopes clatters the goalscorer Erding as he punches a high ball clear.

20:32: GOAL: Lyon 0-1 St-Etienne (Erding). St-Etienne have the lead! Brandao feeds the ball to his strike partner, who’s effort takes a deflection off a Lyon defender and flies past the stationary Anthony Lopes, who moments earlier had made a brilliant double save. The derby has its opening goal!

20:28: Now it is Lyon’s turn to have a go! Mvuemba decides to have a shot from distance, but it flies well wide of the post, and would probably never have troubled Ruffier anyway. First meaningful effort from Lyon though.

20:26: Close: First chance of the game! A Tremoulinas cross finds its way to the back post, where Clerc is waiting for it, and his shot is saved brilliantly by a diving Lopes. Huge save there to keep the score at 0-0.

20:24: Lyon win a corner… Gourcuff on it… but the delivery is well and truly poor and cannot even clear the first man. Needs to do much better if he wants to give his team mates a chance of attacking his delivery.

20:22: So, 20 minutes have come and gone in the derby, and no chances to speak of as of yet. I guess nerves have a lot to do with that, but neither side have showed the necessary quality in the final third to break down the opposition’s defence.

20:19: The derby is heating up…! Bayal Sall goes in hard on Gourcuff, who is not happy at all with the challenge, and he two square up. That leads to a huge argument between the two teams, but it eventually calmed by the referee. From the resulting corner, Lacazette heads wide from the near post.

20:16: Yellow Card: First booking of the day, and it goes to St-Etienne’s Tremoulinas. He leaves his studs in on a challenge, and despite injuring himself slightly in the process, that is a clear yellow card.

20:13: Another warning for St-Etienne. Lacazette plays a clever one-two and is again in behind Kurt Zouma on the left hand side, but his pull back is this time nowhere near finding another player, and once again St-Etienne can clear. Lyon starting to look dangerous.

20:11: First half chance of the game as a ball over Zouma finds Lacazette in behind on the wing, but his cutback aimed at Gomis is cut out by a St-Etienne defender. Better from Lyon.

20:09: St-Etienne have had the majority of the ball in the last two minutes, they seem happy to keep the ball at the back and take the sting out of the vociferous home support. Interesting start so far, but yet to have any chances.

20:07: Must say the atmosphere out there is absolutely brilliant. Before kick off, there were banners and flags galore. The Lyon fans are up for this more than any other match in the whole Ligue 1 calendar. Quite a scrappy, physical start so far, neither side has settled into a rhythm yet.

19:58: Preview: Lyon and St-Etienne lie 5th and 4th respectively, with just 3 points separating them. More importantly, though, both are well behind Lille in 3rd place, and you feel that unless Lyon win here, they are out of the race for Champions League football. St-Etienne themselves are 6 points behind Lille having played a game less, so a win here would be a huge boost going into the final few fixtures. Not to mention that this is one of the biggest derbies in French Football. That all means today is a massive game for both sides.

19:50: Welcome one and all to a Live Commentary of tonight’s huge Ligue 1 derby between Lyon and St-Etienne! With the race for Europe really hotting up, both sides are in desperate need of a vital three points, but only one can get it. Who will it be? Team news coming up shortly…

PSG and FFP: Trouble ahead?