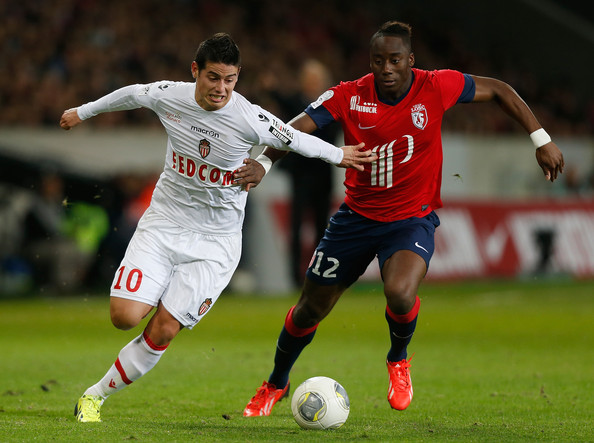 21:55: Well, at the end of the day, a point is not the end of the world for either side. Monaco stay 2nd, Lille stay 3rd and the Ligue 1 table is as it was. That’s all from me tonight, and until next time, Au Revoir!

21:50: We are entering injury time now. Lille have a free kick in a dangerous position, but Balmont’s delivery fails to clear even the first man and Monaco clear easily. Both sides have been really poor in this second half.

21:47: As I said they might, Monaco are beginning to press Lille for the winner. Their latest attack is dealt with though by Enyeama, who comes out and punches clear a dangerous looking free kick. Less than 5 to go.

21:44: Neither side looks like they are going all out for the win. In fact, I reckon a draw suits Lille more than Monaco, so the impetus should really be on the home side to go on and win this game, but as we near the end it looks like 1-1 could well be the final score.

21:40: Kondogbia finds a pocket of space between the Monaco back line and midfield and decides to have a go, but his shot is horrible and flies straight into row Z.

21:37: And again Monaco are close. Berbatov makes a great run in between the centre backs, but the through ball cannot quite pick him up. He would have been through on goal.

21:33: Close: Best chance of the second half! A corner is swung in, and Berbatov loses his marker Kjaer, but he can only head the ball over the crossbar when he really should have hit the target. Much better from Monaco.

21:31: Substitution: The lively James Rodriguez is replaced by Dirar. Slightly unusual change there from Ranieri.

21:28: Monaco are beginning to take hold of this match, and it looks like the Germain-Ocampos switch has been a contributing factor. Monaco are going forward a lot more this half, and Ocampos has been active since his half time introduction.

21:24: This game has become rather scrappy in the last few minutes. Lille do not quite have the control they did in the first half, but neither side is looking particularly dangerous going forwards. 1-1 about fair.

21:21: When Monaco do finally get the chance to go forward, Berbatov takes too long on the ball and Lille get back to close down well. The ball is eventually passed in towards James Rodriguez, but the pass is too strong and the ball goes out of play.

21:18: Lille attack again, as Kalou gets past Carvalho, but his attempted pass is cut out well by Kjaer and Monaco survive once more. When Monaco have the ball, Lille press extremely well and force the mistake. Impressive performance so far by Lille.

21:15: Lille have started this second half very strongly, as they finished the first. Monaco are second to every ball at the moment. They need a big moment to spark the crowd into life, or they face losing this game.

21:13: Close: Lille almost take the lead! Delaplace is released behind the defence by Kalou, but his shot is well smothered by Subasic, who was off his line in a flash. Big warning for Monaco.

21:09: Pretty even start to the second half. Both teams are taking a little while to get back into the rhythm of the game, and we are yet to have any sort of chance for either side. Lille look like they may make a change too…

21:00: We are getting news that Monaco are planning a half time change, with Ocampos about to come on instead of the ineffective Germain. Can’t blame Ranieri for wanting to change things…

20:55: Intriguing first half of football there. Monaco dominated early and got an early goal, but since then it has been all Lille, and they fully deserved their equaliser when it came. Game nicely poised for the second 45.

20:46: Monaco have woken up a little bit after Lille’s equaliser. You have to say the goal was coming, since Monaco scored the opener they just fell asleep and allowed Lille to play without pressure.

20:43: GOAL: Monaco 1-1 Lille (Origi). Lille are deservedly level! They hit Monaco on the break with pace, as Kalou shifts the ball to Mendes, who then passes on to Origi, who has the simple task of finishing into an all but empty net from 5 yards out. Very nice goal from Lille, 1-1 is the score.

20:40: Kjaer is given a yellow card by the referee for a blatant body check on Germain as Monaco looked to break. Pretty unnecessary foul there from the centre back, and he now has to be careful for the rest of the match.

20:37: The referee gives a little telling off to Ranieri for something he said about one of the referee’s decision. Ranieri still unhappy, but he has no choice other than going back into his area and calming down.

20:34: Monaco win a couple of free kicks further up the field to ease the pressure a little. If they have weathered the Lille storm, they will feel that they have a great chance of winning this game now. Still 1-0 Monaco, but Lille have responded very well to going behind.

20:32: Penalty Appeal: Kalou hits a shot into Isimat-Mirin, and the away side want a penalty for handball. The replays show it did just about strike the arm, but it would have been extremely harsh to give it. All Lille at the moment.

20:30: Mendes wastes a 4 on 4 chance for Lille with a misplaced pass to Kalou, but the away side have a corner… which is once again too high and easily claimed by Subasic. Lille just missing that little but of quality in the final third.

20:28: Delaplace almost gets in behind the Monaco defence, but Fabinho is on hand to shield the ball out of play. Much better from Lille now, and the Monaco fans are getting a little restless despite their one goal lead.

20:24: The pace of Origi and Kalou is beginning to trouble the central defence of Monaco as this game goes on. Carvalho and Isimat-Mirin will know that one ball in behind the defence may be enough to get Lille an equaliser.

20:21: Balmont is lying on the floor in serious pain after a full-blooded Echiejile challenge, and the Lille fans want a red card to be shown, but it is just a yellow from the referee. Balmont is up after a while and continues playing.

20:18: Lille win another corner, this time on the left… but the delivery is poor – no pace on the ball, and Monaco’s defenders can clear the ball easily. Lille are getting into good positions, but the final ball is letting them down.

20:15: When Lille finally do get possession, they win a corner on the right. However, as Balmont swings in the ball, a free kick is given for a push on Carvalho. Waste of a set piece there from Lille, but they are improving slowly.

20:12: Monaco are really on top now. After a period of sustained pressure, a deep Rodriguez free kick falls straight to Germain, but his header is woeful and Lille can clear. The away side are yet to get going.

20:09: GOAL: Monaco 1-0 Lille (Obbadi). What a start for Monaco! Berbatov starts the move, playing a ball into Germain down the wing, who crosses to the far post to Obbadi, who finishes into an empty net with Enyeama stranded.

20:07: Both sides have started brightly, but Monaco have just about had the upper hand in the opening exchanges. In fact, Germain was almost through on goal, but Enyeama was quick off his line to deal with the danger.

19:55: Team News: Both teams line up pretty much as expected, with January signing Dimitar Berbatov starting once again for Monaco, who also have James Rodriguez and Germain playing in attacking roles. The Lille defence, which of course went though that stunning run earlier in the season, will do well to keep Monaco out, and will look to hit Monaco on the break with the pace of their front three.

19:45: Welcome one and all to a live commentary of today’s big game: Monaco vs Lille.  Monaco lie second, 11 points behind leaders PSG with a game in hand, and 9 points ahead of today’s opponents Lille. With a win today, Lille can go 5 points clear of St-Etienne in 4th place, and move a step closer to Champions League football next season. A lot on the line today, so let’s get into some team news…