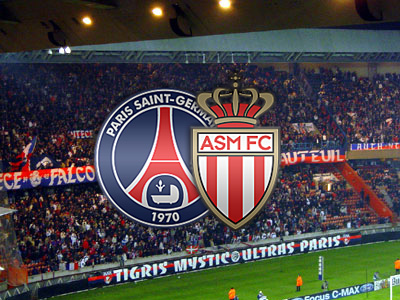 22:00: Well, that game turned out to be the tense, tight affair we expected after the first game between the two sides. Monaco will be happy that they got back into the game after Pastore’s goal, but at the end of the day that result suits PSG the most. Now, after the end of Le Clashique, it is time for me to say goodbye. Until next time, Au Revoir!

21:53: Close: The ball is crossed to Ibrahimovic, who controls it brilliantly, but his left footed shot is saved by Subasic to surely prevent PSG from taking all three points to the capital.

21:50: Close: Fabinho almost wins it for Monaco! Ferreira-Carrasco plays an absolute gem of a pass round the corner to Fabinho, who sees his powerful near post shot saved by Sirigu!

21:46: Monaco get a corner after Thiago Silva tackles Berbatov… but it is cleared by Ibrahimovic and then passed out of play but Moutinho. Ranieri with the last roll of his die, putting on Ferreira-Carrasco instead of James Rodriguez, who had been quiet.

21:44: Substitution: Blanc makes his last change of the day, as Lavezzi comes on for Lucas. What a huge amount a goal here would do for his confidence, he has been in bad form lately.

21:42: We have a small break in play as Moutinho goes down under a strong Matuidi challenge. It looks like he will be OK to carry on though, and we are back underway, with PSG once again controlling possession.

21:39: Well that goal sets up a brilliant last 15 minutes in this game! Monaco will almost certainly throw everything at PSG looking for that all important win, but PSG will be dangerous themselves on the counter.

21:37: GOAL: Monaco 1-1 PSG (Thiago Silva O.G.) Brilliant goal from Monaco, although it is a little lucky with the finish. Monaco work the ball cleverly down the right, giving Fabinho a lot of space to pick out the right cross, and his teasing ball is turned into his own net by Thiago Silva, with plenty of Monaco’s strikers ready to score if the Brazilian hadn’t touched it himself.

21:34: PSG have just taken the sting out of this game in the last few minutes. They are keeping possession around the half way line, without really threatening the Monaco defence, but then again they do not need to after Pastore’s goal.

21:31: Monaco look a little more lively after that substitution, and a clever Berbatov flick almost leads to a chance for the home side. Unfortunately for them, Rodriguez’s chipped pass is too strong for Rivière.

21:27: Substitutions: Two ex-Premier league players now enter this Ligue 1 clash. Berbatov is on for Monaco in place of the ineffective Germain, while ex-Newcastle man Cabaye is on for PSG in place of Marco Verratti.

21:24: Close: Sirigu almost has a shocker! He completely misjudges a high ball, and misses with his punch, but Rivière cannot quite get to the ball to apply the finishing touch. Mind you, Thiago Silva was tugging on his shirt with no intention of playing the ball there…

21:22: Close: Now, though, Sirigu is called into action! Kurzawa delivers a gem of a cross, which is heading straight towards Rivière, but a flying Sirigu manages to punch the ball away to safety.

21:20: Monaco win a corner, their first real chance of the half… but Kurzawa can only head into the hands of a grateful Salvatore Sirigu. For all their first half pressure, the PSG goalkeeper has had very few saves to make.

21:16: Close: PSG have another free kick in a threatening position… and Ibrahimovic almost scores! The shot is heading straight into the bottom corner, but Subasic makes a wonderful save down to his right to keep Monaco in the game.

21:14: Ranieri is very animated on the touchline, constantly shouting ‘joué’ to his players as he demands they increase the tempo. PSG have been comfortable early in this half, is it time for Berbatov?

21:12: Close: Abidal kicks the ball straight into Carvalho with Ibrahimovic ready to turn in at the back post, and the deflection almost carries it past Subasic in the Monaco goal! PSG have a couple of corners, but they come to nothing.

21:08: There is a half time change to tell you about. Kondogbia comes on for Monaco in place of Ocampos as Ranieri puts 3 in midfield to match PSG’s trio. Out with the 4-4-2, and we return to Monaco’s usual formation. It looks like Rodriguez will play just behind the front two.

21:05: KICK OFF: We are back underway in our Ligue 1 clash! What does the second half have for us?

20:56: STAT ATTACK: Monaco have never won a home league match when they have conceded first. When PSG have scored first away from home, they have gone on to win every single time. Ominous for the home side.

20:48: HALF TIME: Monaco 0-1 PSG. Pastore gave PSG an early lead, but Monaco responded well, without getting the equaliser. Should be a brilliant second half, with Monaco pushing forward and PSG hitting them on the counter.

20:45: Monaco desperately trying to level the scores until half time here. Their latest attack sees James Rodriguez take an ambitious left footed shot from outside the box, but it is blocked and cleared by the rock solid PSG defence.

20:43: Verratti, who has been boiling over for a while now, goes into the referee’s book as he catches Ocampos in an aerial tussle. The Italian looks up for this, but he has to be careful now for the second half.

20:41: Ibrahimovic tries to score from an ambitious free kick from 40 yards, but it deflects off the wall and Subasic can save relatively easily down to his right.

20:39: Lucas Moura has been impressive so far for PSG. In their latest attack, he turns two players and then finds a pass to Ibrahimovic through Moutinho’s legs, but the attack eventually comes to nothing as Ibrahimovic’s pass is wayward. We’re closing in on half time.

20:35: Close: Pastore almost gets a second! He makes a break on the right hand side of the penalty area, but is shot flies just wide of the far post. Ibrahimovic, who was asking for the pass across the box, was less than impressed by that effort.

20:31: The tempo of the game has slowed in the last few minutes as both recover from that lightning start. Monaco are incensed when the referee stops play for the injured Pastore, who is soon back on his feet, as they felt they could have played on.

20:28: Close: PSG have a free kick in a brilliant position… Ibrahimovic over it… but his powerful shot is palmed away by Subasic for a corner!

20:26: Monaco are beginning to get a hold on this game, and their latest attack sees Moutinho volley narrowly wide from just outside the penalty area. Brilliant response to going behind so far from the home side, but they really need a goal to get back into this.

20:24: Just seen a replay of that corner which PSG scored from. There is a strong argument that it shouldn’t have been a corner in the first place. It hit Germain’s arm, then came off Thiago Silva’s knee. Really, it was either a penalty (which would have been extremely harsh), or a goal kick. Tad unlucky for Monaco there.

20:21: Close: Now it is PSG’s turn to go close! Maxwell gets away from Fabinho down the left, and his near post cross should really be turned in by Ibrahimovic, but he cannot make any telling touch on the ball and Monaco survive.

20:18: Close: They should be level! Verratti is robbed in front of his own box, and after a rebound the ball falls to Rivière with an open net in front of him, but he cannot react in time and flashes his shot wide! Seconds later, Thiago Silva makes a goal saving tackle to deny Monaco once more.

20:15: Close: And they go close again! This time, a corner is swung in towards Germain at the near post, but he cannot make any real connection with his header and PSG can clear once more. Good response from the home side.

20:14: Close: And Monaco almost hit back immediately! First Moutinho, and then Toulalan have shots block by flying PSG defenders, and Alex eventually clears. There are more goals in this one…

20:11: GOAL: Monaco 0-1 PSG (Pastore). PSG take an early lead! Alex gets a flick on at a corner, and Pastore nods in at the far post! Simple stuff there really, and Monaco will be a little disappointed with their marking there. Both Alex and Pastore were allowed easy headers. Crucial first goal goes to PSG!

20:08: Matuidi is almost put through on goal, but Carvalho just manages to time his slide and intercept the pass before any the Frenchman can cause any trouble. PSG looking ominous at the moment.

20:05: PSG dominating the early possession, and that could be the theme of this game. Lucas wins a free kick after some brilliant footwork, but PSG are happy to keep the ball on the floor and pass it around.

19:58: Just two minutes to go until we get going now, and the nerves must be tingling.  Realistically, if PSG can manage a win today, the title could be all but over. If, however, Ranieri’s tactics pay off and Monaco can pull off a victory, the race for the championship is well and truly on! It should be a cracker.

19:55: Talking Tactics: AS Monaco will line up with an attacking 4-4-2 formation, with a front two of Germain and Riviére in Falcao’s absence. This formation gives them width, and Rodriguez and Ocampos will definitely look to attack Maxwell and Van der Wiel, perhaps the weakest players in PSG’s starting 11. The Champions will look to dominate midfield, with a trio of Motta, Matuidi and Verratti against just the two of Toulalan and Moutinho, and give as much service to star man Ibrahimovic as they can. Expect PSG to dominate possession, and Monaco to hit them on the counter.

19:45: Welcome one and all to some live commentary of perhaps the biggest game so far in the Ligue 1 2013/14 season. Yes, it is the clash of the titans: AS Monaco vs PSG. The outcome of this game will go a long way to deciding the destiny of the trophy, and I for one cannot wait! Here is the team news…

Monaco vs PSG: The Stat Attack