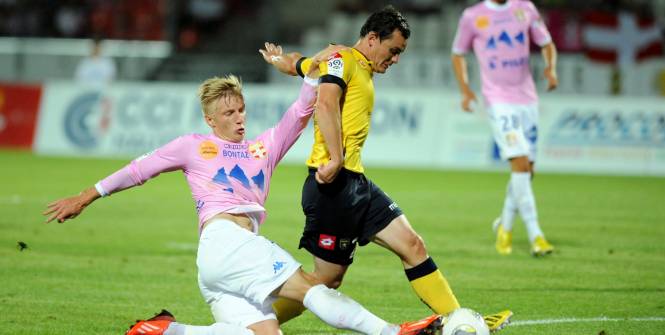 After a thrilling season all round, Ligue 1 has reached it’s final day! European tussles and relegation battles are about to be held in a day of drama, and, as ever, Robert Bhamber is on hand to preview every single game:

Bastia end the season with a home game against Nantes at the Stade Armand Cesari. The hosts will want to end the day as they start it – in the top half of the table. Ligue 1’s mid-table area is extremely tight, with only ten points between seventh and 16th, so there could still be a lot of movement on the final day.

Nantes are three points behind Bastia in 12th and will be able to overtake them in the league with a win due to their superior goal difference. They will be relying on other results to go their way, but a top half finish is still possible for Michel Der Zakarian’s team.

– Bastia have won just three of their last 13 league games.

– However, they are unbeaten in their last four home league matches, winning two of them.

– Nantes have won just three of their last 17 league games.

– Nantes have lost all six league away games this season in which they have conceded first.

– In the reverse fixture in Week 1, these two teams played out a goalless draw at the Stade de la Beaujoire.

Lorient host Champions League-chasing Lille at the Stade du Moustoir. The hosts are sitting in the top half of the table heading into the weekend as an impressive run of form of late has seen them rise up to eighth. They will be hoping their good form continues this weekend against Lille and then into next season as well.

Meanwhile, Lille know that their Champions League qualifying position is under serious threat from St Etienne. If they fail to beat Lorient and St Etienne gain all three points from their match, then Lille could see themselves overtaken on the final day of the season.

– They have climbed from 12th to eighth in this period.

– Lille have lost just one of their last 14 league matches; last week at home to PSG.

– They haven’t been lower than third in the table since Week 9.

– In the reverse fixture in Week 1, Lille won 1-0 at the Stade Pierre-Mauroy.

Marseille host Guingamp at the Stade Velodrome as they look to overtake Lyon on qualify for the Europa League. The home side are just one point behind Lyon heading into the final weekend, so they will be looking to capitalise on any potential slip-up from Les Gones.

Coupe de France winners Guingamp secured their Ligue 1 status last week thanks to a 2-0 over Toulouse, so for the first time in ages, Guingamp fans can enjoy watching their team play without the fear of relegation. They will be looking to complete their trophy-winning season on a high note by gaining all three points against Marseille.

– Marseille are unbeaten in their last seven league games, winning three of them.

– They haven’t dropped lower than sixth in the league all season.

– Guingamp recently ended a five game losing streak in the league and are now unbeaten in their last three.

– However, they haven’t won any of their last four league away games.

– In the reverse fixture in Week 1, Marseille beat Guingamp 3-1 at the Stade du Roudourou.

Monaco host Bordeaux at the Stade Louis II in what could be both managers’ last games in charge. It is heavily speculated that Claudio Ranieri will be replaced as Monaco manager at the end of the season, but he has led his side to a second place finish in the league and they are currently on a six game unbeaten streak.

Bordeaux boss Francis Gillot will definitely be leaving at the end of the campaign, with Real Madrid assistant Zinedine Zidane favourite to replace him. He will leave his team seventh in the league, but he will want to go out with a win and take all three points from the meeting with Monaco this weekend.

– Monaco have lost just one home league game all season; 2-1 against Valenciennes.

– If Monaco gain a point from this match, then they will set the record for the best points tally of a Ligue 1 second-place finisher.

– This will be the third time in four seasons that Bordeaux have finished seventh.

– Bordeaux have not won any of the eight league away games in which they have conceded first this season, drawing two and losing six.

– In the reverse fixture in Week 1, Monaco beat Bordeaux 2-0 at the Stade Chaban-Delmas.

Nice end their season at home against Lyon. Although they are just two points above the relegation zone, the hosts are secure in Ligue 1 for at least another season due to 17th placed Evian and 18th placed Sochaux facing each other this weekend. However, manager Claude Puel will still want his players to take all three points from this match and end the season with a victory in front of their home fans.

Lyon, meanwhile, will be looking for a win to secure fifth place in the table and the Europa League qualification that comes with it, as Marseille sit only one point behind in sixth. This will be Remi Garde’s last match in charge of Les Gones and he will be hoping to bow out with a crucial win.

– Nice have won just once in their last eight league games, losing five.

– They have scored 30 league goals in 37 matches this season, the lowest total in the division.

– Lyon have lost their last two league matches, away at Marseille and then at home to Lorient last week.

– In the reverse fixture in Week 1, Lyon comfortably won 4-0 at the Stade de Gerland.

Champions PSG end their successful season by facing Montpellier at the Parc des Princes. The hosts retained their championship two weeks ago, but will still want a win this weekend to end the season on a high, especially after losing for the first time at home this campaign to Rennes recently.

Montpellier sit 14th in the league, but could move up a couple of places if they replicate Rennes’ achievement and manage to win at the home of the champions. However, their form of late suggests this is highly unlikely to happen.

– PSG have lost just three league games all season; at home to Rennes and away at Evian and Lyon.

– The champions climbed to the top of the table in Week 10 and were never displaced.

– Montpellier have won just two of their last 11 league games, losing five of them.

– They are yet to win an away league game this season in which they have conceded first, drawing three and losing six.

– In the reverse fixture in Week 1, Montpellier held PSG to a 1-1 draw at the Stade de la Mosson.

Reims end the campaign by playing Rennes at the Stade Auguste Delaune. The hosts will be looking to gain all three points from this match in order to retain their top-half position. Their poor run of form of late has seen Hubert Fournier’s fall down the table, slipping from seventh to ninth in the last few weeks.

Rennes, meanwhile, can’t quite reach the top half of the table, but can move up a couple of places and increase their prize money with a victory. There are five points separating these two teams heading into the final day of the season.

– Reims have won just one of their last 10 league games, losing six of them.

– They are unbeaten in home league games this season after scoring the first goal, going on to win seven and draw the other three.

– Rennes have only won one of their last six league matches; 2-1 away to champions PSG.

– They are unbeaten in their last four league away games, winning two.

St Etienne host relegated Ajaccio at the Stade Geoffroy-Guichard with the possibility of qualifying for next season’s Champions League still alive. The home side need to gain all three points from this match and hope that Lille slip up against Lorient. If Lille draw and St Etienne win, both teams will finish with 69 points, but St Etienne have the better goal difference by three.

Ajaccio, meanwhile, will be playing their last match in Ligue 1, for a year at least, and will therefore be hoping to go out in style. Their win at home to Reims last week was only their fourth of the season in the league and manager Christian Bracconi will be hoping to pull off an upset and make it five wins this weekend.

– They have conceded just 33 league goals this season; only the three teams above them in the table have better defensive records.

– Ajaccio have scored 36 league goals this season; only Guingamp (34) and Nice (30) have scored fewer.

– They have conceded 69 league goals; more than any other club in Ligue 1 this season.

– In the reverse fixture in Week 1, St Etienne won 1-0 at the Stade Francois Coty.

Sochaux and Evian meet on the final day of the season in a crucial clash at the bottom end of the table, in which the loser will be relegated. This means that both teams have their destiny in their own hands; if they win, they stay up; if they lose, they go down.

All the momentum heading into this match rests with the home side, whose revival in recent weeks under boss Herve Renard has been remarkable. 19th in the table with just 11 points at the halfway stage of the season, Sochaux now head into this relegation-decider just one point behind Evian in the table, but only a win will be enough for them to survive.

A draw will be enough for Evian to stay up, as their 2-0 win at home to Nice last week ensured that they have a slight advantage heading into this weekend.

– Sochaux are unbeaten in their last seven league games, winning four of them.

– They have been in the relegation zone ever since Week 3.

– Evian have not been in the bottom three at all this season.

– They have yet to win an away league game this season after conceding the first goal, drawing two and losing the other nine.

– In the reverse fixture in Week 1, these two teams drew 1-1 at the Parc des Sports.

Toulouse end their campaign with a home match against relegated Valenciennes. The hosts are two points away from Bastia in 10th, so they could sneak into the top half if other results go their way this weekend. However, they will first have to end their recent winless streak.

Valenciennes, meanwhile, are already relegated and will be simply looking to make the most of their last game in Ligue 1. Like their opponents, Valenciennes are currently on a long winless streak, but manager Ariel Jacobs will be looking to thank the fans for their support this season by ending the campaign with a victory.

– Toulouse haven’t won any of their last eight league games, losing four of them.

– This poor run of form has seen them fall from eighth to 11th in the league.

– Likewise, Valenciennes haven’t won any of their last eight league matches either. They have lost seven of these and are heading into this match on the back of six consecutive defeats.

– They have been in the relegation zone ever since Week 5.

– In the reverse fixture in Week 1, Valenciennes beat Toulouse 3-0 at the Stade du Hainaut.

Dijon to enter into negotiations with Newcastle to sign Romain Amalfitano