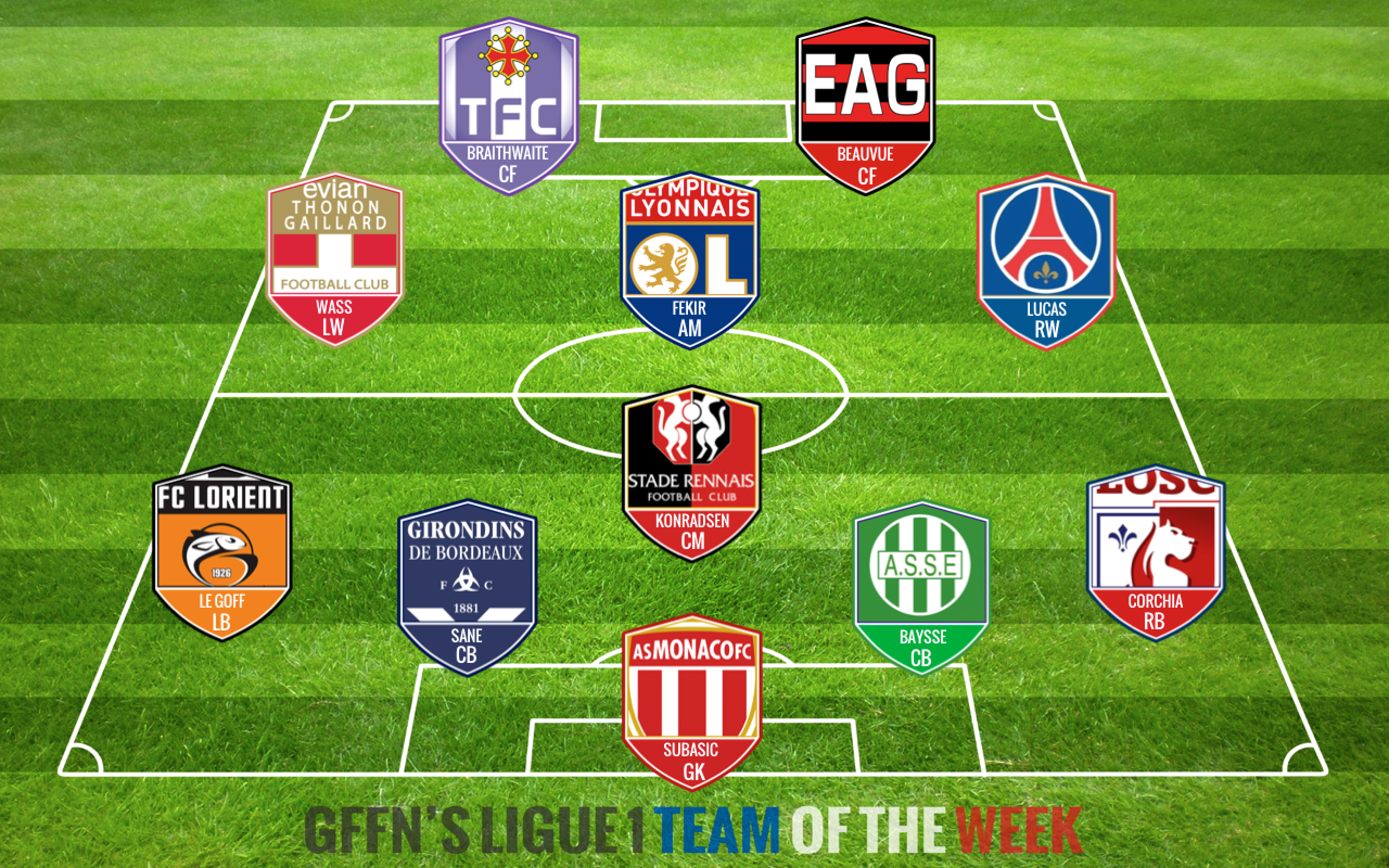 Simon Scutt gives you the Get French Football News Team of the Midweek with an additional set of fixtures that saw PSG fail to capitalise on Marseille’s dropping of points.

Daniel Subasic’s second consecutive penalty save helped his side overcome RC Lens on Tuesday night at the Stade Louis II. Playing the last hour with a man fewer than the visitors, thanks to Wallace’s dismissal Monaco needed to dig deep to get past the northerners. Subasic dived the right way to push out Pierreck Valdivia’s spot-kick Valdivia’s attempt on the rebound was a scarely believable miss over the bar. Lens remain in drop-zone, while Monaco slowly are climbing the table having now reached eighth position.

Lorient secured an impressive point at home to Marseille on Tuesday night, having got back on level terms through Jordan Ayew’s penalty against his former employees following Dmitri Payet’s stunning opening strike. Later on Marseille began to throw everything at Lorient yet could just not break down les merlus’ defence. Marseille stay top whilst Lorient are sixteenth.

Metz vs Bordeaux saw the two Carrasso brothers, Johann and Cedric take each other on. Both sides kept a clean sheet with the Bordeaux defence being the most tested of the sides. The away side’s defence stood strong to deny their opponents. Lamine Sané made two important last ditch tackles in the cause. Bordeaux drop to sixth, while Metz are looking decent in mid-table as they are 12th.

Good things come to those who wait and seldom has a player had to wait quite as long for his moment in the limelight than Paul Baysse. Signed from Brest over a year ago Baysse made his debut for les verts on Wednesday at Montpellier, he capped his debut with a first goal to boot. His was on hand to smash the ball high into the net following Pionnier’s parry. Sainté rise to fourth with Montpellier dropping to tenth.

Rennes are flying high at the moment, no defeats in their last nine matches has seen them rise steadily up the table to fifth. They beat Nice on Wednesday night thanks to a goal from man of the moment Paul Georges Ntep before Norweigan Konradsen turned the ball home from a free kick just after half time. Nice took a consolation goal late before some late attacks saw them come close to a draw but ultimately it was too little too late.

Presented with the opportunity to go top for the first time this season PSG missed their opportunity as they were held 1-1 by Lille on a cold night in the north east of France.  PSG were left to rue their missed chances and general inconsistency that has been a blight on their season. This is their seventh draw out of sixteen matches, the highest total in the league. One player to stand out however was Lucas Moura, the Brazilian was his typical effervescent self running at the defence causing them problems time and again.

Lyon looked to rebound from their derby defeat at Saint Etienne at home to Reims on Thursday night. They were set on the way perfectly as they took the lead as early as the sixth minute. It was Nabil Fekir’s teasing fizzing freekick that found Corentin Tolisso at the back post to head home. That lead would last for a half-hour and the deadlock would remain until stoppage time at the end of the match when Alexandre Lacazette’s cross was palmed into the net giving the home side the win.

It is almost trite to mention the importance of the Dane to his Evian side, seemingly every positive result for Evian has Wass at the heart of it. Once more it was his free-kick party trick that got his side back into the game in Corsica on Wednesday. He equalised on 65 minutes before the victory was sealed late on. Two shots on target, two goals for Evian. Evian have risen up-to thirteenth; Bastia meanwhile drop to the foot of the table.

Guingamp entertained Caen in a relegation clash in Brittany on Wednesday night, things began perfectly when Guingamp opened the scoring within the first four minutes. It would continue in the same vein and turn into a nightmare evening for Caen and their defenders as Guingamp ran riot. It was the kind of performance that must leave their fans scratching their heads as to how they can play like this one game yet they have lost more games than anyone in the division.

Toulouse went to Nantes on the back of having lost five out of their last six league games while the hosts are the in the middle of a difficult fixture list that sees them go to both Marseille and Paris in the space of eight days. The game itself highlighted the difference between the two sides, efficiency in front of goal being the key difference. Braithwaite saw his side home when he smashed home a cross after some poor defending in the 85th minute. Toulouse climb to eleventh, Nantes stay seventh.

Olivier Giroud “not worried” about losing place in Arsenal team