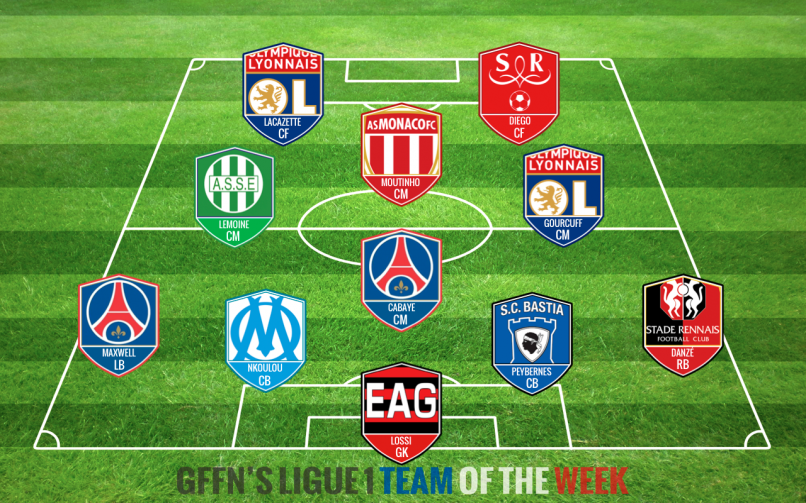 Simon Scutt returns after an international break to bring you Get French Football News’ Ligue 1 Team of the Week.

Guingamp were rooted to the foot of the table before their trip up to Lille. Guingamp emerged with the three points but were made to work hard for it. Lille enjoyed almost complete domination of the game- 73% possession and 29 shots but it was to no avail. Guingamp held on and secured the win thanks to some very good defensive work from the Breton side.

Paris Saint Germain got their first away of the season in a slightly unusual encounter with RC Lens. For a start the game was played at the Stade de France, so PSG were away from home in name but not geographically speaking. The goal of the game was scored by brazillian full back Maxwell with a superbly executed long range lobbed finish. After a ill-advised punch out from Lens keeper Rudy Riou the ball fell the feet of Maxwell who fired home with consummate ease over the backtracking goal keeper.

Eight wins in a row is the reason for which OM sit atop Ligue 1, seven points clear of PSG. Toulouse were put to the sword on a sunny Sunday at the Velodrome thanks to their 2-0 victory. Things got off to a good start when defender Nkoulou shouldered the ball home from a Dimitri Payet free kick. The ball looped off the defenders shoulder and into the top corner.

Bastia achieved a successful smash and grab win away to Nice on Saturday. Just what the doctor ordered for Claude Makélélé and his struggling side. A long hoof upfield followed by a defensive mistake put Floyd Ayité clean through on goal who did the rest. What subsequently followed was Nice setting siege to the Bastia goal. They were able to hold out thanks to a great rearguard action.

Rennes were the latest visitors to the Stade Symphorien and they came away with a decent point. A fair result with both sides having similar number of shots with both defences standing firm to keep the game scoreless. Rennes will be looking to kick on following a poor series of results prior to the victory over Lens in week 9. They welcome Lille next weekend before headed to Nantes for the derby.

Saint Étienne were on a sequence of two consecutive defeats going into Saturday’s game at Lorient. It was a game dominated by the away side in terms of attacking threat; Lorient did not show much attacking intent they mustered a single shot on target. It was left to Lemoine to fire home fantastically late to give Les Verts the win.

Lyon continued their strong home form with a demolition of Montpellier on Sunday night the Lyon attack was at its effective best and Yoann Gourcuff was back to his near best scoring two goals either side of half time. First Ligue 1 goal since the end of 2013 and first Ligue 1 double for five years.

In their match on Friday night against Lens, PSG were without a heap of players through injury and this gave Yohan Cabaye a chance to show what he can do and he delivered a quality performance evidencing why PSG spent a significant sum of euros on the former Newcastle man. His goal levelled things up just before the half hour mark, when he fired home from outside the area.

Monaco welcomed the league’s form side, Evian, to the principality on Saturday night hoping to finally kick start their season that has been very stop-start thus far. They were ahead very early on when they were awarded a penalty which the Portuguese international converted. He was one of the standout performers even popping up to head off the line later in the game.

Eight goals in ten games for the Lyon hit man who is really showing his worth for Les Gones of late. They have scored 12 goals in their last three outings at home. Lacazette helped out his side to the tune of a goal and two assists as the Lyon attack ran riot.

Very much a game of two halves took place in Nantes on Saturday night. Nantes scored an early goal and proceeded to dominate the game without really looking like scoring again. Reims got back into the game on 58 minutes when the Brazilian Diego stood over a free-kick and curled it into the bottom corner of the Nantes’ net. Cue Reims domination and they could have gone on to seal all three points. When all is said and done a draw was a fair outcome.