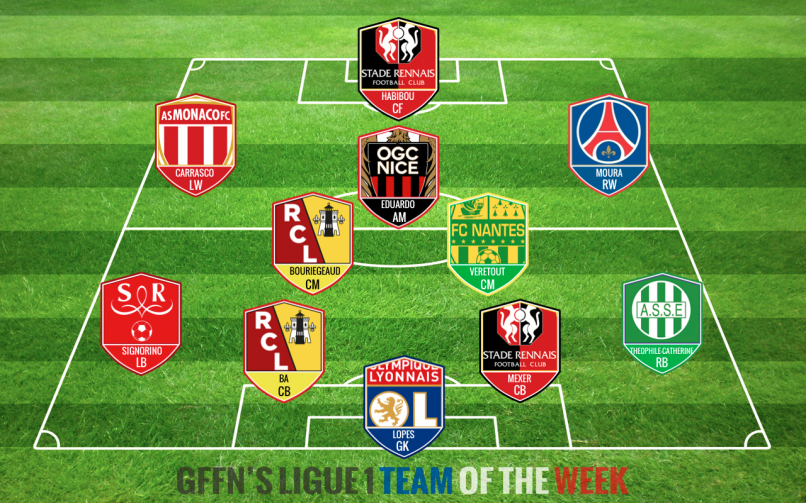 Simon Scutt reviews the weekend’s Ligue 1 action to bring you the latest Get French Football News Team of the Week.

Lyon ended Marseille’s series of  eight consecutive wins on Sunday night. Lyon were subjected to the now traditionally Marseille pressing and fast attacks.  The Lyon defence stood tall thanks in no small part to their goalkeeper who kept Marseille at bay to secure the win as he made a number of quality saves.

Reims took all three points from the visiting Montpellier team with a late goal on Saturday night. This performance was based on a good defensive performance, Montpellier had the lion’s share of the chances but were dealt with by the Reims defence. Franck Signorino popped up with the assist for the winning goal to cap a strong showing.

One of the weekend’s more surprising and impressive results was at Toulouse where newly promoted Lens beat the home side by two goals to nil. Lens were deprived of a number of players due to injury and suspension. This result took Lens out of the relegation zone and up to 16th.

Saint Etienne returned from Italy after securing a good draw away to Inter Milan in the Europa League. They came back to take on a Metz side who have come back down to earth somewhat after their excellent beginning to the season. This result means Metz haven’t won in their last three games. Sainté now sit fourth in the table just one point behind PSG & Lyon but five behind leaders Marseille.

Lens were tremendously efficient at Toulouse on Friday night; they scored with both of their first two shots on target. An all-round impressive performance from the team from the north of France as they secured their second away win of the season. It was Bourigeaud who hit Lens’ second and his first Ligue 1 goal as he finished coolly from inside the box.

A few weeks back, Nantes were in the middle of a penalty crisis; they simply could not hit the net from the spot. Now it is a case of crisis, what crisis? Veretout broke the hex at home to Lyon and stepped up again in Annecy to set his side on their way to a second away win of the season and catapult Nantes, temporarily, on to the podium ahead of next week’s derby match with Rennes.

Two sides at the top of the table took on one and other in Paris on Saturday afternoon. In the end it was a fairly predictable result even if the match itself was not a routine one for the winners. Both teams finished the first half with ten men and Paris were awarded two penalties both converted by Brazilian Lucas. Without their two star strikers it was left to Lucas to step up and deliver which he did.

Monaco were in Corsica on Saturday to take on struggling Bastia and they left it late but were able to get the win. Monaco continued their good away form with Yannick Ferreira Carrasco in excellent form. He contributed two assists for his team mates before sealing the win on 84 minutes with a goal of his own. The result saw Monaco climb to eight while Bastia drop worryingly into the relegation zone.

The standout scoreline of the weekend took place in Brittany on Sunday afternoon. Nice were the visitors to Guingamp and got the sort of win that will not be forgotten easily by either set of fans. Nice beat Guingamp seven goals to two. Carlos Eduardo was the first player for twenty years in Ligue 1 to have scored five goals in the same match. Guingamp look to be seriously struggling with the rigours of Europa League football when back in Ligue 1 action.

Rennes exploited any potential tiredness on the part of Lille with a comfortable two nil win on Sunday.  They started well, going close through Paul-George Ntep but he was unable to find the net, Ntep would prove a better provider as his cross found the head of Habibou as the Central African headed home his second goal of the season.