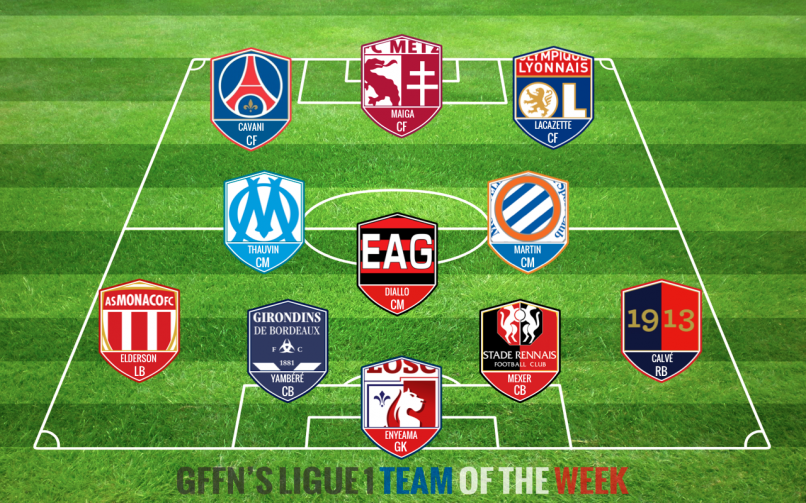 Simon Scutt brings you this week’s Ligue 1 Team of the Week.

Lille’s home match with Saint Etienne saw a game of two penalties. Both missed or saved depending on interpretation. Lille did what Lille do best- defending. Vincent Eneyema gave another display showing why he is considered one Ligue 1’s best stopper. He kept his side in the game when he saved Gradel’s late penalty for Sainté.

Monaco came into Friday’s game at home to Reims on the back of two straight wins but were left with plenty of regrets after a succession of missed chances led to Reims equalising and thus taking a point from the principality. Elderson provided his side’s only goal of the game from some neat interplay that left the left back to fire home from a tight angle.

In the second of Sunday’s derbies Bordeaux welcomed Toulouse to dispute the second Garonne derby of the week after Tuesday’s cup match. After a fairly tame first half the game got going in the second half when Bordeaux went two up in the first seventeen minutes of the second period. Aside from some sloppy play from Gregory Sertic, which led to the TFC consolation goal, the Bordeaux defence stayed solid and saw out the game to the win.

The first derby of the day on Sunday saw Rennes make the short trip down to Nantes. Things started brilliantly for the away side as they took the lead after just 3 minutes. They were put under a fair amount of pressure from the home side which led to Sylvain Armand heading into his own net. But overall the Rennes defence stood tall and kept the Nantes attack at bay for the majority of the game.

Jean Calvé did his best to get Caen back into the game when being led two goals to nil at Metz. His freekick found the net to give his side the impetus to reduce the deficit, his Caen side would go to get back on level terms but then shoot themselves in the foot when they gave away a last minute penalty which ultimately cost them the game.

Guingamp got over their 7-2 thrashing at home to Nice with a tight win over struggling Bastia. They got over the line thanks to an own goal. An important win for the Bretons who climbed out of the bottom three.

Marseille got over their difficult week with a win over a very young Lens side. While they were made to work for it they proved their innate qualities as they overcame Lens. One player who made a real difference was Thauvin. It was his corner that was inadvertently flicked into the path of Nkoulou to head home. Then, he finished coolly from Gignac’s cut back to give his side the win. All things are set up for next week’s game in Pairs, a Marseille win would see them seven points ahead of PSG whereas a PSG win cuts the gap to a single point.

In a game played into Montpellier’s rugby stadium the football side saw off the challenge of Evian which a comfortable two nil win. A first half from Berigaud, against his former employers, gave Montpellier the lead in the first half. Then right at the death- a failed goal kick set the home on the attack Martin’s cross gave Mounier a tap-in.

A week ahead of the much anticipated game at home to Marseille PSG overcame Lorient after a generally disappointing display in Brittany. Cavani was one PSG’s only player to really put in a performance of note. He was the player to get the equaliser when he turned the ball over the line on the hour mark. PSG remain unbeaten and stay four points off leaders OM.

One of Ligue 1’s most in form players is surely Lyon’s Alexandre Lacazette; he netted his ninth and tenth goals of the season at Nice on Saturday night. Both goals were very impressive efforts from the striker, the first a strike from the edge of the area followed by a jinking run. The second, he slammed home at the death from 20 yards out. Lacazette is flying high at the moment and looks very difficult to stop right now.

Premier league watchers may not believe this but Modibo Maiga turned in a great performance on Saturday night scoring twice to give his side the win against Caen. The first a poachers effort from close range before finishing well, for his second, from inside the box one on one with the keeper. His first Ligue 1 goals in 2 and a half years.