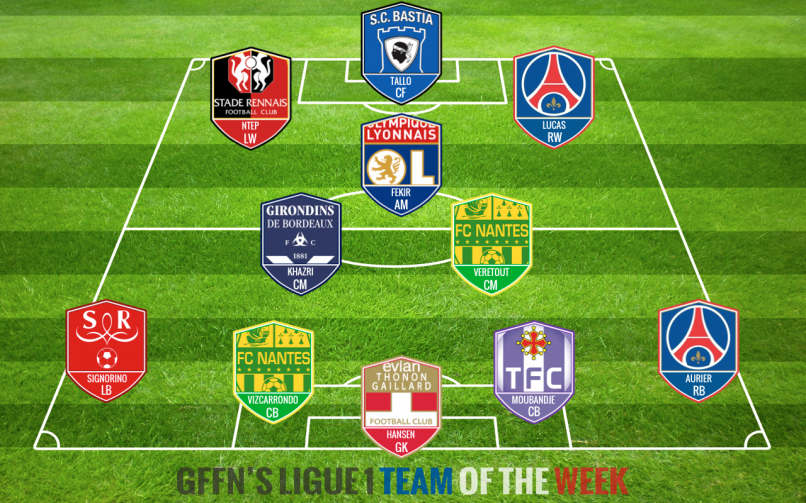 Simon Scutt takes you through the thirteenth Ligue 1 Team of the Week of the season.

Having been dropped for Evian’s trip to Montpellier, Hansen was restored to the lineup at home to Nice on Saturday night. And he played like someone with a point to make. Keeping Nice at bay whilst letting his teams’ talisman do the work at the other end. This result ended Evian’s sequence of four straight losses and brought them out of the drop zone.

Undoubtedly the match of the weekend took place on Sunday night, Champions PSG welcomed leaders Marseille to the Parc de Princes. A match that saw the home side run out two nil winners, the first goal set up by right back Aurier on the right flank. Aurier really made his mark on the match making twice as many tackles as any player on the pitch.

Nantes continued their good form with another win away from home. This time they came from behind to defeat the Normandy side. The equaliser coming through Nantes’ long haired Venezuelan centre back whose header deceived Vercoutre in the Caen goal as it found the net.

Toulouse hosted Metz on Saturday night on a run of four defeats in all competitions so would have been glad to get back into winning form with a convincing win over Metz. Metz are not at the their strongest away from home, they have only win and four points from their games on the road. Toulouse’s win here leaves them at eleventh place in the table.

Reims continued Lille’s disappointing week with a 2-0 win over the northerners. The game itself was turned on its head when a twenty fourth minute penalty resulted in the visitors being reduced to ten men. After the penalty was converted Reims doubled the lead shortly after and from then on in Lille never looked like getting back in the game. Reims climb into the top half of the table while Lille are stuck down in fourteenth.

Nantes born and bred Jordan Veretout is beginning to show some of his potential. Veretout has not missed a single minutes of Nantes’ league campaign and has four goals and two assists to his name. Against Caen on Saturday he added one of each allowing his side to remain in the dizzying heights of fifth place in the table.

After the controversy over Wily Sagnol’s midweek remarks his Bordeaux team had onfield affairs to take care of. Things went well for the away side as they found themselves two goals up to the good within the first forty minutes of the clash. Khazri was there to score the first and play in Diabaté for the second. Bordeaux’s first away points since late September.

One player to really take this season by storm is the Brazillan winger Lucas Moura. He was again heavily involved in PSG’s crucial win over title challengers Marseille. He reacted quickly to poke the ball home from close range after Aurier’s cross. His presence on the right flank was a source of constant trouble for OM as they succumbed to a third defeat of the season.

Lyon hosted Guingamp on the back of an unbeaten record that stretches back to the end of August. They preserved said record by swatting aside the Breton side. At the heart of all that Lyon did was young midfielder Nabil Fekir, he got on the score-sheet twice both with impressively taken goals. This result keeps Lyon on the podium going into the international break.

The weekend’s action kicked off with a Breton derby on the firday night when Lorient went south to take on Rennes. The game itself promised much but delivered precious little. Chances were few and far between for the two sides. It was down to Rennes’ star turn, Ntep, to turn things in his sides’ favour. Some neat footwork led to Ntep crossing the ball to be turned in by Henrique right at the death.

Things are looking up in Corsica. A few days after dispensing with the services of Claude Makelele Bastia were able to return to winning ways with a win over Montpellier. Thanks to a double scored by Ivorian striker Tallo. The first was a poachers’s effort when he turned in a loose ball in the box. The second- a lobbed finish after a fortuitous bounce enabled him to score the only goals of the game both before half time. Bastia climb out of the relegation zone, while Montpellier lose away again.