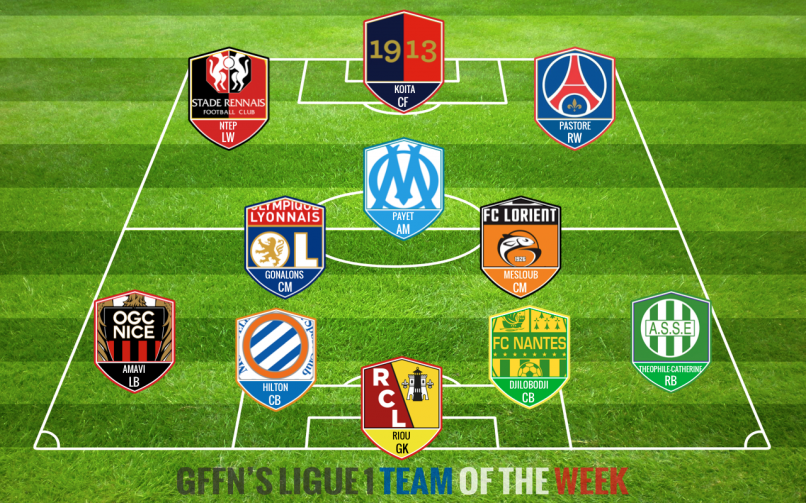 Despite not keeping a clean sheet Rudy Riou put in an excellent display at Lorient on Saturday night. The former Nantes stopper made eleven saves in a proper backs to the wall performance, having played with a man fewer for seventy-five minutes. He stood strong to deny the Lorient attack thus keeping them to a single goal.

Nice and Reims played out a scoreless draw on the south coast on Saturday night, not the most of entertaining affairs with neither sides attacking unit on form. One of Nice’s standout performers this season has been the young full-back Amavi. He was at his enterprising best again against Reims. Both sides are currently solidly mid-table as they are 10th and 11th in the table.

Nantes welcomed Saint Etienne to the Beaujoire to dispute one of France’s classic historic match-ups. The game itself saw a fantastically lively and entertaining first half with plenty of ebb and flow both sides having chances. In the second half the away side began to dominate and could well have taken all the points, but the Nantes defence stood strong. Nantes climb to fourth after a series of ten matches without defeat.

For the second game in a row Montpeller win 2-0 at their temporary home of the Altrad rugby stadium. This time it was against Toulouse.  While the first goal was served on a plate by the Toulouse defence, the second game from some neat interplay in and around the penalty area. This result sees Monaco climb into the top half of the table while Toulouse drop to 13th.

Three draws in a row is Saint Etienne’s recent record in Ligue 1, while they will have a certain amount of regrets after Sunday’s 0-0 at the Beaujoire. They were forced to defend well against a Nantes side that flew out of the traps backed by a full stadium making a lot of noise. The scoreline was hardly surprising given the fact that these were two of the best four defences in the league.

Lyon remain on the podium following their goalless draw in Corsica with Bastia. Neither side really were able to dominate going forward. Bastia were looking to play on the counter and were able to get in behind a number of times. Yet for the majority of the game this young Lyon side was able to stand strong, they dominated possession thanks to their midfield presence.

A veritable six-pointer played out at le Moustoir on Saturday night between Lorient and Lens, a match that saw the away side reduced to ten men on the quarter of an hour. From then on it was pretty much all Lorient, shortly after the red card Lorient opened the scoring. Mesloub was the driving force in the Lorient midfield nearly scoring after a wonderful slaloming run, he tested Riou in the Lens goal on many an occasion.

PSG kicked this weekend’s action off when they went to take on Metz. Having defeated leaders Marseille in their previous game to reduce the gap at the top to a single point they were looking to keep the pressure on OM with a win on Friday. They were able to take all the points eventually after they let a two goal lead slip as they gifted Metz two penalties in quick succession to remove the two goal cushion they enjoyed. Pastore was excellent and scored his first goal of the season when he stole the ball off the defence and chipped the ball into the net.

Marseille got back to winning ways on Sunday night when Bordeaux came to the Velodrome, it was the visitors who took the lead in the second half forcing OM to come from behind to take the win. It was thanks to two Dmitri Payet deliveries that found Marseille players to head home. Marseille maintain their slender lead at the top of the league.

Rennes played their third derby in a row on Saturday night at Guingamp. After a draw at Nantes and a win at home to Lorient they were victorious at Guingamp. Thanks to a goal from Paul-Georges Ntep who took advantage of some sloppy defending to fire home. This was Rennes’ first win in any game with Guingamp since 2004.

Caen took a good point away from Monaco on Saturday night with their two-all draw, with each side scoring an own goal. Koita equalised for Caen in the second half with an absolute thunderous strike past Subasic high into the Monaco net. This result is Monaco’s third draw in a row and brings Caen up to 16th in the table while ASM remain eighth.