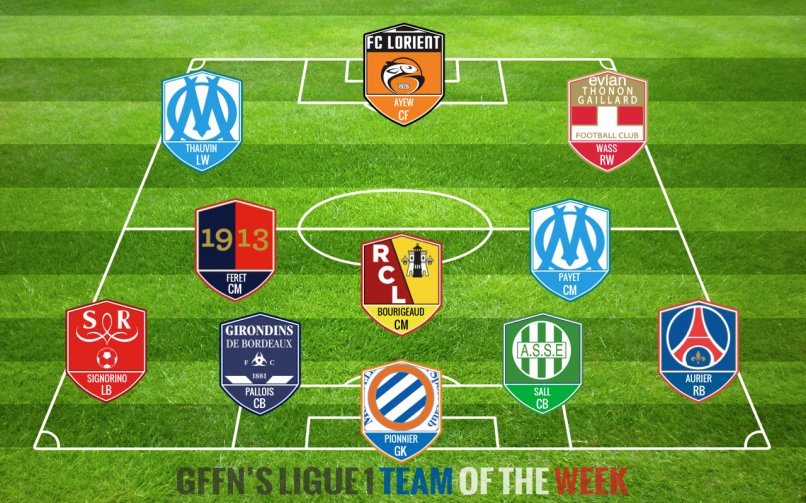 Simon Scutt takes you through the fifteenth Ligue 1 Team of the Week of the 2014/2015 season.

One of the standout performances of the weekend came from Montpellier’s reserve keeper Lionnel Pionnier who made a string of impressive saves to deny Caen a precious win whilst he and his teammates left Normandy with a decent away point. Pionnier was replacing regular stopper Geoffrey Jourdren who has a hand injury and is out for around a month.

PSG chalked up their sixth win in a row with a 1-0 triumph over Nice, a game PSG could have arguably lost not for the strength of their defence and some wayward finishing from Nice. Aurier made the most number of tackles in the match and looked dangerous rampaging down the right flank.

The curse has been lifted. Saint Etienne beat Lyon at home for the first time since April 1994. His powerful header from Gradel’s corner got things off to the perfect of starts for Les Verts. Remarkably, Sall repeated a feat he achieved last season in scoring on his birthday, which was indeed he last goal for the club.

Bordeaux remain of one only two teams, with PSG, to stay undefeated at home. The visitors this weekend were Lille the worst attack in the league which was in evidence as the Lille again drew a blank with the Bordeaux defence standing strong.

Reims came into this weekend on the back of a good run, six games without defeat with three wins and three draws. Things got off to a great start when David Ngog scored one of the goals on the weekend, set up by left-back Signorino. Reims would go on to win the game late on which put to an end Bastia’s mini good run under new Manager Ghislain Printant.

Clash of two promoted sides took place at Amiens where Lens played Metz both sides have enjoyed many ups and downs in the beginning third of the season. It would be the home side that would put their off pitch issues to one side as they overcame Metz thanks in no small part to midfielder Bourigeaud. He accurately picked out El Jadeyaoui at the back post following a corner. Later on he would head home his second of the season and Lens’ second goal of the night.

Caen stayed out of the drop-zone but have still only won home victory to their name and they were held by Montpellier who remain, themselves, safe in mid-table despite their poor form away from home. They too have just the single win away from home. Feret has been an important player for this Caen side playing the vast majority of minutes.

Leaders Marseille welcomed the league’s best defence in Nantes to the velodrome on Friday night. Payet got his team on the way with an assist for Florian Thauvin. Both teams saw that an entertaining game ensued with chances for both teams. Marseille travel to Lorient and Nantes entertain Toulouse both on Tuesday night looking to carry on their good form and bounce back respectively.

Thauvin’s season had yet to really get going, three goals and two assists in 14 matches prior to Friday night’s show-down with Nantes. While it may be somewhat premature to proclaim Thauvin to have well and truly arrived, his showing this weekend shows his undoubted promise may be coming true. His finish to open the scoring was of the highest order, acrobatically turning in Payet’s cross and subsequently deceived both defender and goalkeeper.

Just where would Evian be without their Danish star, Daniel Wass? The answer is probably in Ligue 2. He has been involved in 50% of Evian’s goals this season.  Against Guingamp this weekend he pulled another wonderful strike from a free-kick to give his side the first goal of the game in what was a bottom of the table clash. Evian would go on to double the lead thanks to some appalling defending by the Bretons.

Things can happen very quickly in football, Toulouse were winning 1-0 at home to Lorient until suddenly five minutes of madness put Lorient 3-1 up thanks to a lovely spell of attacking football. At the heart of this was Jordan Ayew who won and converted the penalty for Lorient’s third. Ayew also laid on a goal for Jeannot with a pinpoint pass.