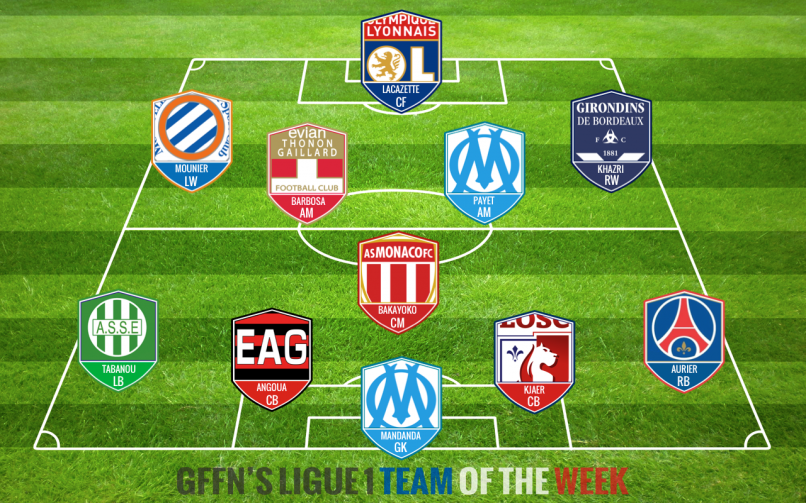 A weekend in which 36 goals were scored means chosing the best goalkeeper somewhat more difficult than usual. Marseille’s Steve Mandanda was unlucky with the Metz goal as Florent Malouda’s strike riochetted off Charles Nkoulou thus deceiving the Frenchman on its way in. Otherwise he performed well especially in repelling Malouda’s vicious shot in the first half.

Three wins in a week for Les Verts is a terrific series which has allowed Saint Etienne to keep the pressure on the teams above them in the hunt for Champions League places. While the win against Bastia required some riding of luck Saint Etienne proved their superiority as they won the important moments. Such as Tabanou racing back to clear the ball off the line and prevented Bastia taking the lead.

Fresh from putting five past Caen in midweek Guingamp went to Reims full of confidence and said confidence transferred into goals as they scored another three to seal the three points. Guingamp are slowly moving away from the relegation zone with another win. Reims meanwhile remain in the crowded mid-table.

The Derby du Nord returned to the Ligue 1 stage this weekend when Lille took on Lens, the match took place at the Stade de France due to the renovations of Lens’ Stade Bollaert. In the end, a drawn match was probably no surprise as neither side has really hit top form this season. Lille’s defence is holding up fairly well given the absence of key players. Kjaer is holding the fort with typical ease as he excelled on Sunday.

PSG took on Nantes ahead their clash in Barcelona in midweek and they were made to work hard by the men in yellow. Alejandro Bedoya’s splendid long range strike put PSG on the backfoot as they were forced into action as Zlatan’s two goals proved the difference between the sides.

Monaco were looking to build on their midweek success at home to Lens when they went to Toulouse on Friday night. They turned in a clinical performance to seal the win and progress up the table as they as they begin to make amends for an inconsistent first third of the season, they moved up to seventh as they edge towards the European slots.

One of the more surprising scorelines of the weekend was Montpellier’s 4-0 win at Rennes. Rennes had not lost since September and Montpellier had yet to really set pulses racing in recent weeks and months. Antony Mounier put the gloss on the result when he fired home in the 91st minute. Rennes drop to sixth while Montpellier climb to eighth.

Bordeaux had never lost to Lorient at home and that series would continue after Saturday night’s game. An eventful game with five goals and the lead changing hands several times. Khazri was on hand to punish an error from Benjamin Lecomte in the Lorient goal, he was also the provider for Diabaté’s second and Bordeaux’s winner.

We now have an answer to the question ‘What would Evian do without Daniel Wass?’. Well, the answer is simple they would select Cedric Barbosa. The 38 year old veteran took the place of the injured Dane and, in his stead, curled in a wonderful free-kick to give Evian the lead. Later he would put Evian back in the lead when he finished coolly arriving late into the box. His one man effort was not enough as Lyon would win in the last minute.

Dimitri Payet is enjoying a fantastic season he was decisive again for his Marseille team on Sunday night at home to Metz. He delivered a sublime ball onto the head of Gignac before finishing with aplomb at the end of the ninety minutes to confirm the victory and seal the three points. Marseille retook the lead from PSG the one-point gap remains.

One Ligue 1’s undoubted star players was at it again on Sunday at Evian, 2 goals and it was his free-kick that was palmed into Benzia’s path for the opening goal. These were his twelfth and thirteenth goals of the season respectively, in doing so he became the league’s highest goal scorer. Lacazette had the coolness to convert a last minute penalty to allow his side the chance to reclaim third spot on the podium.